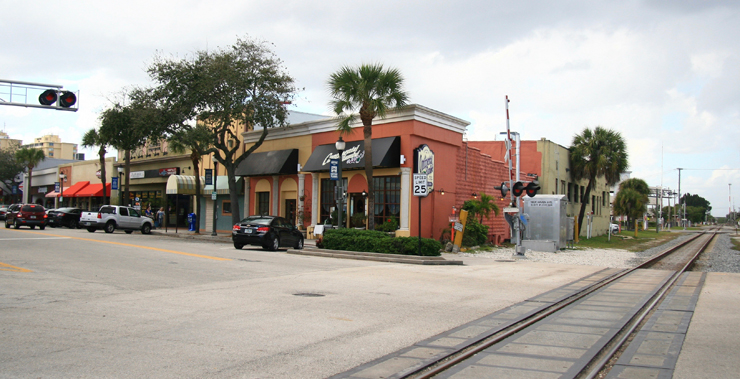 Florida East Coast’s single-track right-of-way through downtown Melbourne, Fla., shown in 2014, is being converted to two tracks to support Virgin Trains USA passenger service. An appeals court decision has upheld Virgin Trains’ right to use private activity bonds as part of the funding package for that project.
Bob Johnston

WASHINGTON — The U.S. Court of Appeals has upheld a decision allowing Virgin Trains USA to use private activity bonds to help finance its expansion to Orlando, Fla.

The appeals court did say the county had legal standing to represent citizens in the “zone of interest” who might be affected. Approximately 20 miles of Florida East Coast Railway’s single-track right-of-way through the county, through and north of Vero Beach, Fla., is part of the process to restore a second track and upgrade highway crossing protection to support 110-mph passenger operation.

But the Appeals Court then rejected all Indian River County arguments. One was that the bonds couldn’t be used because they would help finance more than just highway crossing renovation. Another contention was that the Federal Railroad Administration’s more than 600-page Environmental Impact Statement should have taken a more extensive look at such negative impacts as trespassing away from public crossings and train noise.

“The record belies these claims,” Appellate Court Judge Harry Edwards writes, pointing out that the environmental document addressed not only all of the elements required by the National Environmental Policy Act but also obtained commitments from the company to mitigate many of them. These include installing fencing at locations where illegal trespassing has been shown to take place and erecting pole-mounted horns at 117 highway crossings between West Palm Beach and Cocoa, Fla., 23 of which are in Indian River County.

Treasure Coast Newspapers says the county has spent $3.5 million in taxpayer funds to fight the Miami-to-Orlando project; the total tab including money spent by Citizens Against Rail Expansion and other entities has approached $8 million. Other counties have since decided to work with Virgin Trains USA to iron out infrastructure improvement specifics; many communities are now also seeking stations.

County Administrator Jason Brown told the paper that an appeal to the Supreme Court hadn’t been ruled out, “but we have to evaluate all of our options.”