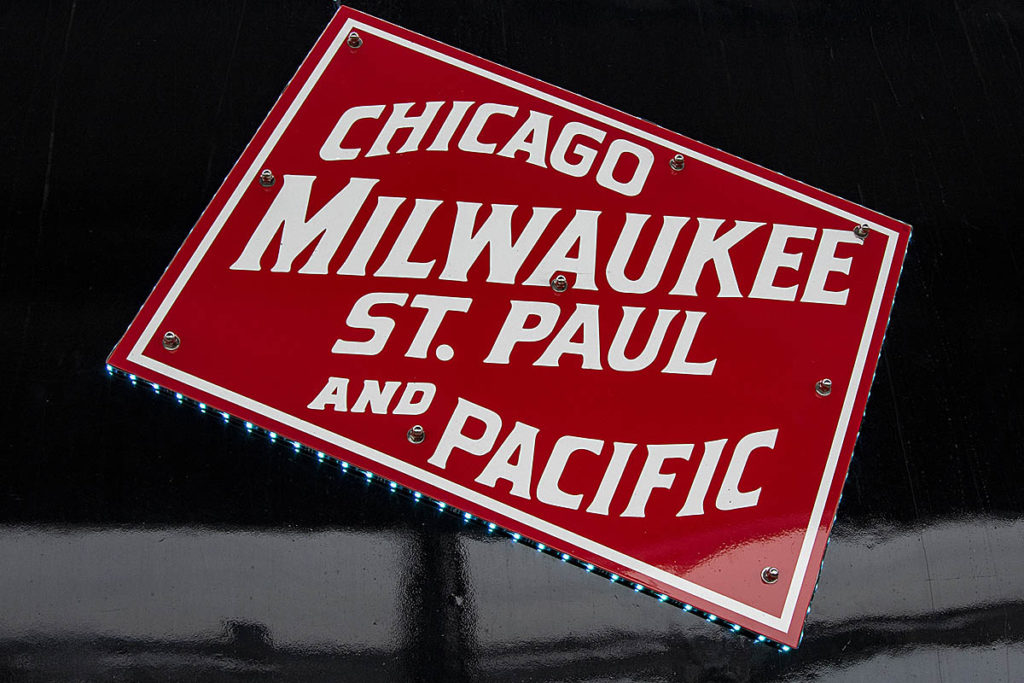 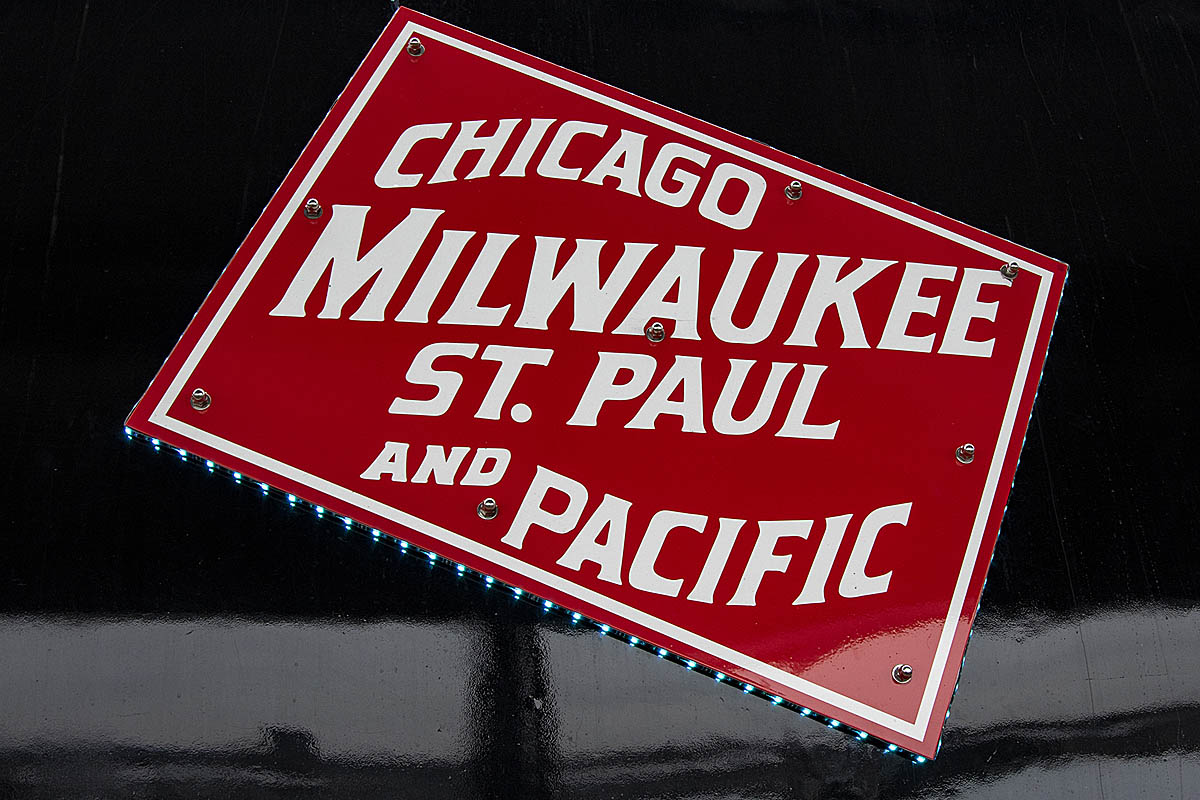 Even with its holiday adornments, No. 261 still proudly displays its Milwaukee Road heritage.
Steve Glischinski
ST. PAUL, Minn. – “It’s the Most Wonderful Time of the Year” is a popular Christmas song, but it’s theme can also apply to mainline steam operators who find the holiday season a way to bring in more revenue as the year draws to a close. Operating holiday trains has long been a tradition on tourist and heritage railroads, but in recent years the banner has been picked up by organizations that operate larger steam locomotives.

Beginning in 2014, the Friends of the 261’s Milwaukee Road 4-8-4 No. 261 has been pulling the “North Pole Express” at St. Paul Union Depot. The train operates on short runs on Union Depot property with a mix of bi-level and single-level equipment. It’s one of the non-profit Friends biggest fundraisers of the year, especially now that Amtrak has in effect prohibited main line steam excursions with its new charter train policy.

Preparations for the North Pole Express begin months in advance. Dates of operations and schedules are laid out, sponsors (which include BNSF Railway) are contacted, and the Friends Justin Young sets up the on-line ticketing program. Young also serves as the “point man” on the day of train operations, manning the desk where passengers check-in for their ride.

Before the train can turn a wheel, passenger cars must be cleaned and decorated with holiday lights and wreaths, while No. 261 is equipped with decorations and lights and a “North Pole Express” nameplate ahead of the smokebox.

Other volunteers move a special “North Pole” stage from the Friends shop in Minneapolis and assemble it at Union Depot. Each trip the train pulls up alongside the structure and children can watch as “elves” work and Santa emerges to board the train.

Getting enough volunteers is one of the biggest challenges the Friends faces in operating the train, Friends of the 261 President and Chief Operating Officer Steve Sandberg told Trains. Volunteer coordinator Jon Strand must line up at least 40 volunteers on weekdays and even more on weekends to staff the trains. In addition to the crews that operate the steam locomotive, volunteer positions that must be filled include ticketing check-in, sales, preparation and distribution of cookies and cocoa to children, gate agent, station master, first class service crewpersons, car hosts, entertainment, Santa’s helpers, two Santa’s and Mrs. Claus.

This year Strand was aided in the scheduling of volunteers by using an on-line service, SignUp.com, that allows volunteers to log in, view their options and choose time slots they wanted to work.

Sandberg’s wife Megan coordinates entertainment that includes elves and a princess that regale children on the train and in the depot. This year a table was added in the depot where children could make their own Christmas decorations.

Sharing overall supervision of the event with Sandberg is Erik Hoofnagle. He serves as a jack of all trades, coordinating a myriad of tasks including lining up hotel rooms, preparing hot cocoa, filling in for volunteers who need a break, answering questions and problem solving. His son Cole serves as coordinator of souvenir sales, flying in from Nebraska where he is a college student.

This year No. 261 will pull 48 North Pole Express trips over nine days. “Running a 4-8-4 in cold weather is a lot more difficult,” Steve Sandberg says. “The cold makes everything harder to do, things freeze up, and you are wearing several layers of clothing to stay warm. It’s not like the old days where they could put the engine in the roundhouse on cold nights.” Each night, a member of the steam crew must spend a long, cold night in 261’s cab to keep watch on the 74-year old locomotive.

Still, one of the reasons the Friends is able to succeed is the camaraderie of the crews. The annual event offers the chance for volunteers to see each other and renew friendships. The train has also become a tradition with families: many of the passengers are repeat customers (the trains sell out every year) who return year after year, some traveling from adjoining states to take the one-hour rides. The trains also allow children to get an up-close view of a large steam locomotive, a special holiday gift in the 21st century.

For more information on the North Pole Express, go to www.261.com. 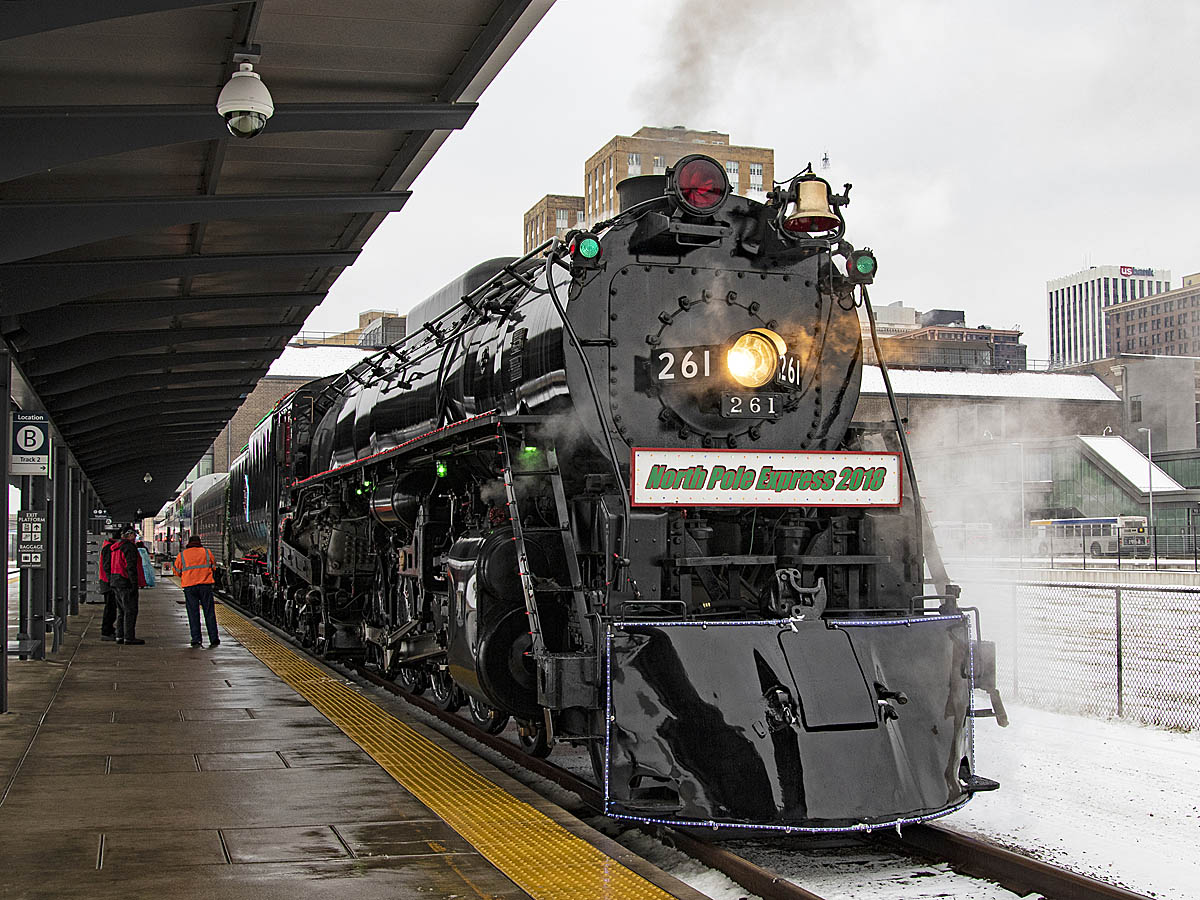