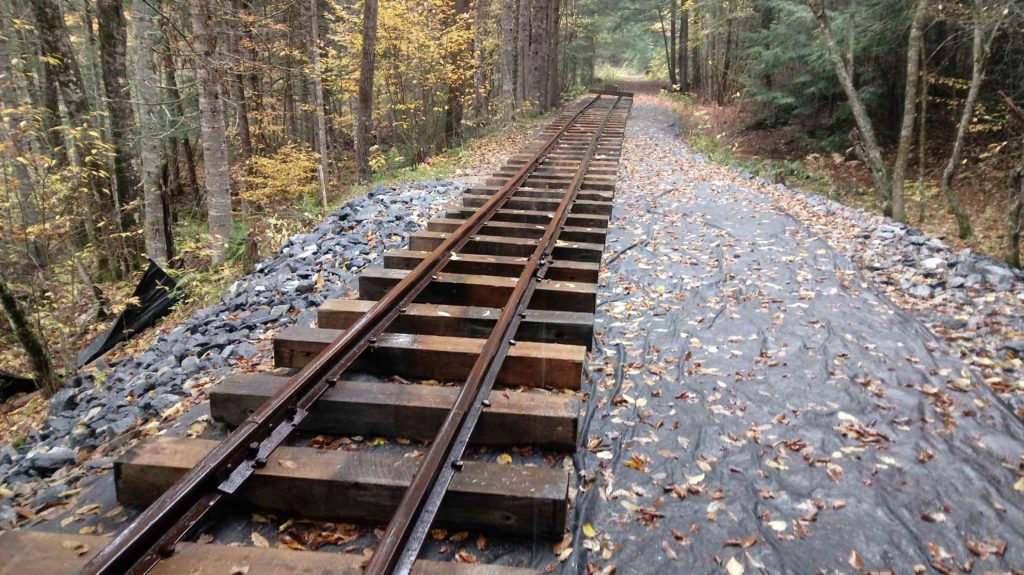 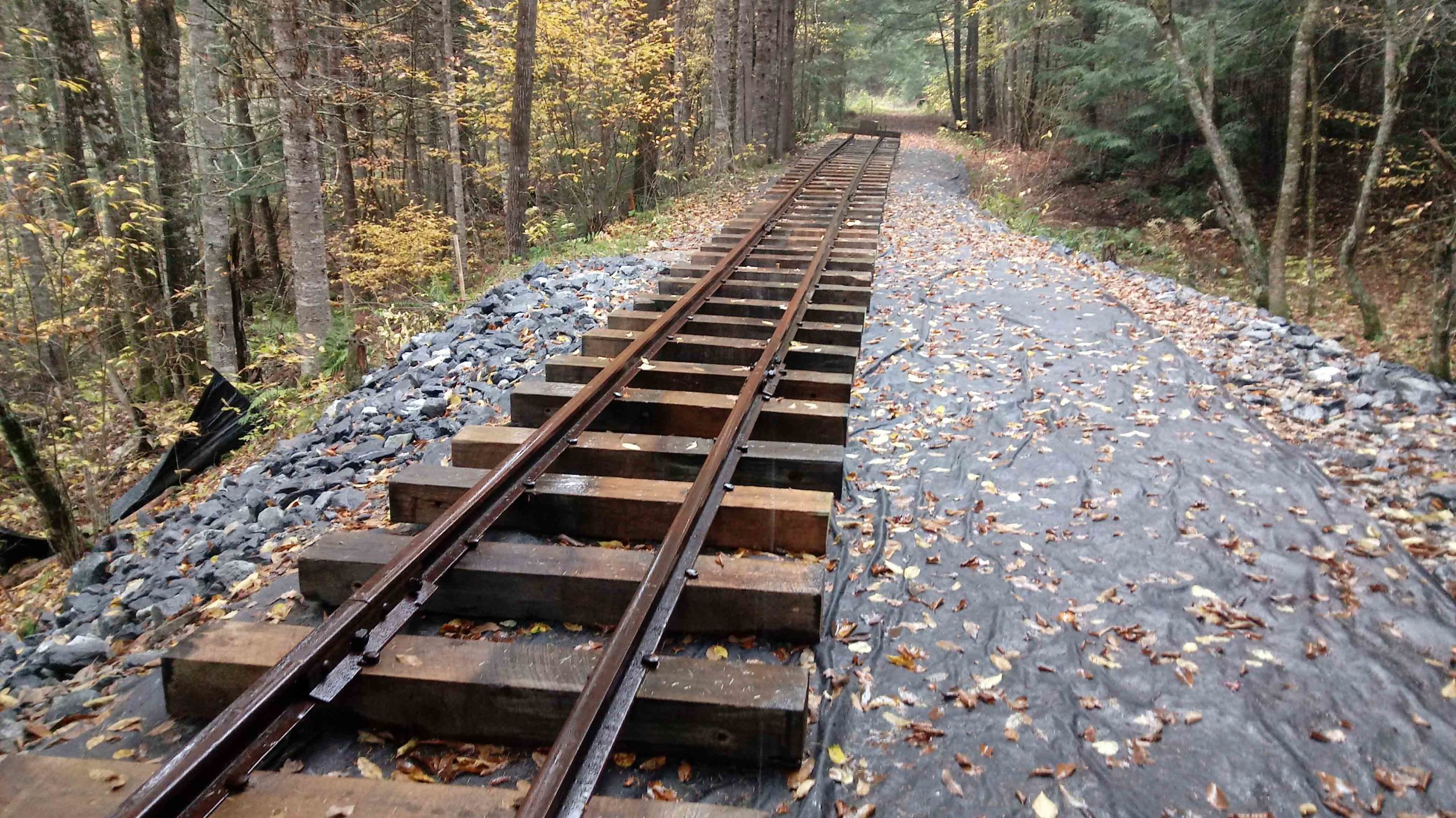 WW&F members plan to build about 2,000 feet of track next fall with help from the Webb Award received on Jan. 26 from the Mass Bay Railroad Enthusiasts. Here is the end of track in October 2018.
WW&F: Mike Fox
WEST SPRINGFIELD, Mass. — The Mass Bay Railroad Enthusiasts has awarded its annual $10,000 H. Albert Webb Memorial Preservation Award to the Wiscasset, Waterville & Farmington Railway Museum to purchase track materials and contract labor for the museum’s Mountain Extension Project.

The award was made at the Amherst Railway Society’s Railroad Hobby Show on Jan. 26. The annual show is one of the largest such shows in the country, annually attracting more than 22,000 visitors, who come to view all sorts of railroad hobby activities showing in over 400,000 square feet of exhibit space.

David Brown, president of Mass Bay RRE, presented the award to David Buczkowski, president of the WW&F Railway Museum. The award will be used to purchase track materials and contract labor for the museum’s Mountain Extension Project.

The Mountain Extension Project is a multi-year effort to re-lay track on three-quarters of a mile of the original WW&F Railway’s grade, a scenic descent of a mountainside that brings the railway to the former Boston & Maine Railroad Howe pony truss bridge installed by the museum over Trout Brook in 2018 and beyond to a new station adjacent to Maine Route 218. Last fall museum volunteers laid more than 1,900 feet of track over three days, and in October 2019, they intend to lay another 2,000 feet of track. The entire Mountain Extension will be completed and opened for operation in 2021, following construction of a run around track and other facilities adjacent to the Trout Brook Nature Preserve.
Leigh A. Webb of Franklin, New Hampshire, donor of the award named for his late father, said, “Once again the Mass Bay RRE Award Committee has selected a worthy recipient. The WW&F truly understands the inestimable value of sustaining and recruiting a passionate hands-on volunteer base that also emphasizes the future of all such organizations: getting the young involved. Congratulations, not just for the project that is receiving the Award, but for all the success the WW&F has had, and will continue to have.”

Brown, along with William Crawford, Chair of the Mass Bay RRE Award Committee, also announced the ten recipients of grants from the Mass Bay RRE Railroad Preservation Fund, totaling $22,500.
Mass Bay RRE established the Mass Bay RRE Railroad Preservation Fund in 2016 to further support worthy projects to preserve historically significant railroad equipment, structures, information or artifacts in New England. Grants, generally not exceeding $5000, are awarded annually, funded by the Club’s available funds and donations to the fund from members.
Each year, Mass Bay RRE is designating its largest Preservation Fund grant or grants as “The Ralph S. Hawkins Memorial Railroad Preservation Grant” to honor and preserve the memory of its dear friend and supporter, Ralph Hawkins, who died suddenly early in 2018. For 2019 there are two recipients of the Ralph S. Hawkins Memorial Railroad Preservation Grants:
The 470 Railroad Club of Cumberland, Maine, will receive $5,000 toward the restoration to operating
condition of Boston & Maine F7A locomotive No. 4268. The 4268, along with sister unit 4266, are survivors from the B&M’s initial purchase of four units from EMD in 1949 and 1950. The two locomotives were purchased by the 470 Railroad Club in the 1980s; 4266 was restored and leased to the Conway Scenic Railroad, where it regularly powers passenger trains. The 4268 has been on static display at the Conway Scenic, lacking necessary operating equipment including the diesel engine, generator and electrical equipment. The 470 Club purchased a 1959 EMD GP9 to supply these needed components, and its diesel prime mover was installed in the 4268 in November 2018. When restoration is complete (expected in 2020), the 4268 will be leased to the Conway Scenic and will operate along with the 4266.

Greenville Junction Depot Friends of Greenville, Maine, will receive $5,000 toward the restoration of the
roof of the 1889 Canadian Pacific Railway Depot in Greenville Junction, Maine. The depot, on the southwestern shore of Moosehead Lake, is an arresting structure, one of five of its kind in New England and the only one in Maine. The building’s significance rests in its Queen Anne style, its historic function, and its association with the Canadian Pacific Railway. The Depot was decommissioned and abandoned in 1965. In 2008 Preservation Maine listed the structure as one of “Maine’s most endangered historic properties.” The Friends organized in 2010, began to raise funds locally, and undertook to “save the Depot.” In 2015 the building was removed from Maine Preservation’s list of endangered historic properties and in 2017 it was enrolled in the National Register of Historic Places. Even in the early stages of its restoration, the stately 1889 structure in the Stick-wood style recalls the heyday of passenger and rail transportation in the Moosehead Lake Region and in northern New England and stands ready to tell its rich story to new generations of visitors.

18 thoughts on “Maine narrow gauge line will use $10,000 award for track extension NEWSWIRE”