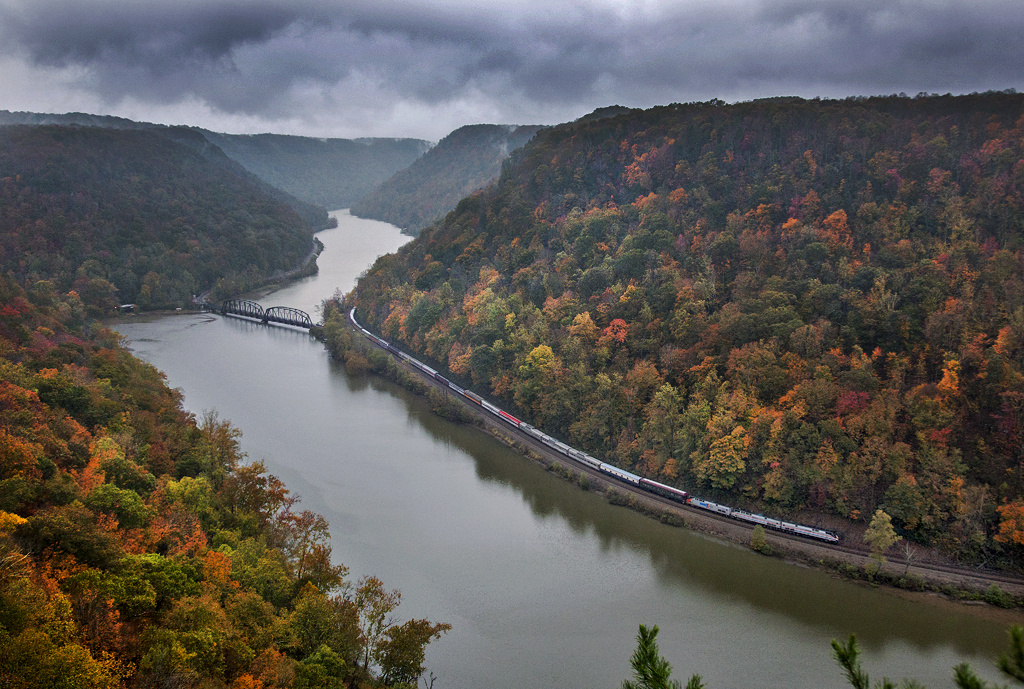 The westbound New River Train with there Amtrak P42DCs and a 30-car passenger car consist rolls along its namesake river on its journey to Huntington, W.Va., from Hinton, W.Va., on Oct. 29 2017.
Chase Gunnoe
HUNTINGTON, W.Va. — After 52 years of operating mainline passenger excursions between the West Virginia cities of Huntington and Hinton, the Collis P. Huntington Railroad Historical Society is cancelling its New River Train excursions in 2019.

The non-profit group cites Amtrak’s rising costs as a leading factor in its decision to cancel the annual excursions. Society officials tell Trains News Wire the organization has received two price quotes this year for operating the New River Train. Amtrak provided its first quote in January, but just a couple of weeks ago, a revised quote was emailed to the organization with a 9.6 percent cost increase. The passenger railroad cited rising labor costs for the unexpected hike.

Chris Lockwood, the organization’s general manager, says these figures and Amtrak’s ability to implement new prices and policies with 60-days notice makes it financially impractical to plan and market excursion trains for the third and four weekends of October.

Cancelling 2019’s excursions dates builds upon an already troublesome 2018 excursion season when the New River Train suffered a financial loss of more than $100,000 due to Amtrak mid-season tariff hikes. Lockwood says the organization built its operating budget based on Amtrak’s Oct. 1, 2017 tariff increase, but new private car policies and a mid-season tariff hike in 2018 skewed the group’s budget. The group still has unpaid bills from last year.

Joe Rosenthal, the organization’s assistant general manager, is responsible for calculating operating costs, securing private cars from across the country, and coordinating those logistics and fees. He says there are two types of costs the society calculates.

First, the organization budgets for mileage costs in transporting all of the privately owned railcars to a central point, like Chicago or Washington, D.C., to be placed on a dedicated deadhead train to Huntington. Rosenthal says those cars travel from all across the nation.

Secondly, the organization requests a rate from Amtrak to move the equipment to Huntington and operate the four-day excursion using Amtrak locomotives and personnel. Amtrak’s charter and special movements office is responsible for calculating and issuing these rates.

Rosenthal says both mileage and the operating cost of the New River Train saw multiple layers of unexpected price increases in 2018. In addition, Amtrak cut Huntington as an intermediate stop where passenger cars could be added or dropped by the Cardinal. This forced the organization to accept Amtrak’s deadhead costs from Chicago, which were figured in the overall operating rate.

“We began adjusting our expenses by reducing food costs, supplies, and administrative expenses. These had minimal impact on our operation because of the significance of the operating cost increase,” Lockwood says.

The organization also had to spend more money advertising the excursions because its marketing schedule was delayed due to uncertainty with Amtrak’s new policies in early 2018.

“The lessons we’ve learned in 2018 and Amtrak’s ability to once again increase these costs – just like the 9.6 percent hike we’ve already seen once in 2019 – is bad business to move forward and try to continue this tradition despite its economic validity and value to southern West Virginia,” Lockwood says.

“We appreciate many people stepping forward to assist in this difficult time. We thank the office of U.S. Sen. Joe Manchin (D-W.Va.) for calling on Amtrak to explain its rate increases and try to reverse this trend. We gave it our best effort, but this is the only viable option now,” the organization said in a statement issued to its membership Tuesday night.

The New River Train was the country’s last-surviving and longest mainline passenger excursion train, hauling around 4,800 passengers annually during its four days of operation on CSX Transportation-owned tracks in southern West Virginia. The 30-car train was an economic boost for Hinton – a town that hosts a rail festival in recognition of the train’s annual runs. The organization says the New River Train’s overall impact to the West Virginia economy is roughly $8 million.

“We don’t think this is the end of the New River Train– but it’s goodbye for now,” Lockwood says.

News Wire is reaching out to private car owners, local leaders, and Amtrak for comment on the organization’s Tuesday night decision.