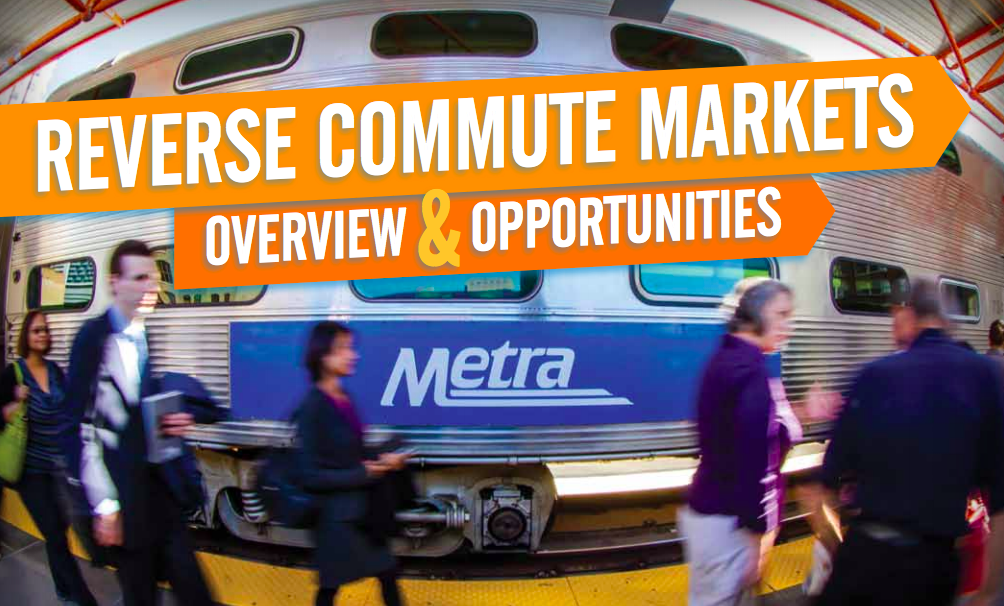 A screen image capture of the cover of a report studying reverse commuting on Chicago’s Metra.
Metra
CHICAGO — A March 4 launch date has been scheduled for the start of new reverse-commute service on Metra’s Milwaukee District North Line, officials have announced.

The new service is intended to provide improved outbound transportation from Chicago’s downtown and North Side to suburban Lake County, Ill., where twelve Fortune 500 companies and several pharmaceutical firms, including giant AbbVie and Horizon Pharma, are based.

Historically, Metra’s 11 lines have been geared toward providing inbound service to Chicago.
In the past, there has been no morning outbound express service on the line, and the afternoon trains have either been too early or too late for most workers.

It marks the second time Metra has instituted reverse-commute service to Lake County. Metra revised its UP North Line schedule in 2007 by scheduling early morning “Sunrise Express” service. Sunrise Express ridership has averaged more than 400 trips a day since 2012, according to Metra.

The new service is a two-year pilot project funded by a public-private partnership between Metra and Lake County Partners, an economic development corporation affiliated with Lake County businesses and governments. Metra’s board of directors formally approved the agreement in October.

“We are hopeful that this initiative will build our ridership, help local businesses to recruit top talent and have a positive impact on economic activity in Lake County,” Metra CEO/Executive Director Jim Derwinski said in a statement. “This partnership also is an innovative way to test the demand for service to Lake County and potentially improve our infrastructure.”

Lake County officials formally proposed the service at a Metra Board meeting in April 2018. The officials asked Metra to explore ways to improve reverse-commute service in order for them to effectively recruit and retain employees living in Chicago. They also argued that better train service would reduce pollution and roadway congestion and improve employee productivity and satisfaction. In addition to AbbVie and Horizon Pharma, Trustmark Insurance, Tenneco, Northwestern Lake Forest Hospital, Lake County government, the city of Lake Forest and the village of Deerfield are participating in the agreement.

“With this new service, it is now easy to live downtown and work in Lake County,” Lake County Partners President and CEO Kevin Considine said in a statement. “This is a tremendous opportunity for city dwellers to build careers at any of our globally recognized companies.”

Under the new schedule, Metra has added a new outbound express Train 2191, departing Union Station at 6:25 a.m. and arriving in Lake Forest at 7:15 a.m. The train will make all stops in Chicago between Union Station and the Edgebrook station, and then operate as an express to Lake Cook Road. Pending an agreement with Canadian Pacific, which Metra said is anticipated soon, this train will be moved to an earlier slot, departing Union Station at 5:35 a.m. and arriving at Lake Forest at 6:25 a.m.

Metra said if the pilot project shows that there is a strong market for reverse-commute service and that the service is self-sustaining, the partners agree to enter into an agreement to fund the construction of new universal crossovers near the Lake Forest Station. A crossover allows trains to switch between tracks. Constructing crossovers at Lake Forest would allow Metra to turn trains around at that location, which would create an opportunity for better service in the morning and evening rush periods if demand supported it.

“Working with the private sector to achieve their employment goals by attracting talented young people who desire to live in Chicago is a win-win-win situation,” says Metra Chairman Norm Carlson. “The city of Chicago, Lake County, and the employers all benefit. Public assets and operating funds are leveraged by private investment to enhance rail service that is a green solution. We look at this partnership as being a prototype for future expansions of Metra’s service to benefit the public. This is regional cooperation at its finest.”