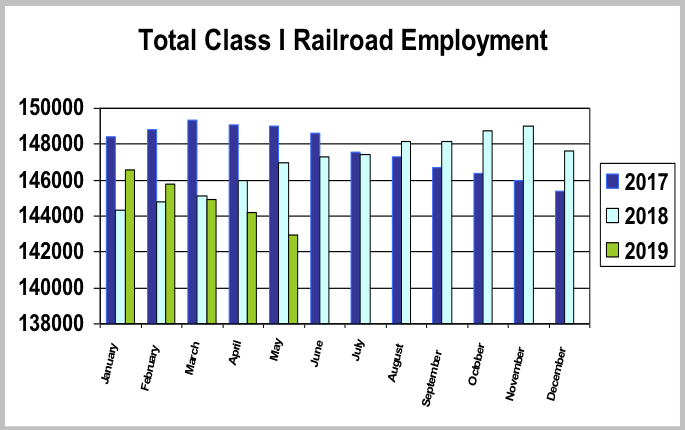 Overall railroad employment tends to ebb and flow with traffic volumes. But now the Class I systems are moving more traffic with fewer people: U.S. rail traffic was 24% higher in May 2019 than it was in February 2017, according to Association of American Railroads data.

A review of railroad employment figures compiled by the U.S. Surface Transportation Board through May 2019 shows the impact of PSR.

CSX’s total employee headcount is down 18% since it adopted Precision Scheduled Railroading in March 2017. In contrast, overall employment at eastern rival Norfolk Southern is down 8% over the same period.

At CSX, the biggest hit was to executives, officials, and staff assistants, whose numbers fell by a third. Not far behind: A 29% reduction in professional and administrative staff. Some of those cutbacks, however, were launched by CEO Michael Ward just before Harrison arrived at the railroad’s headquarters in Jacksonville, Fla.

The number of maintenance-of-equipment workers at CSX fell 22% as the railroad reduced the number of its car and locomotive shops and scaled back operations at some of its remaining shops.

The number of train and engine crews at CSX fell 16% as the railroad operates fewer but longer trains.

The CSX maintenance-of-way headcount is down 11%.

Last fall, NS announced it would gradually adopt a PSR-based operating plan. Since September 2018, overall headcount at NS is down 5%.

The biggest drop since September has been an 11% decline in executives, officials, and staff assistants. The number of professional and administrative staff fell 7%.

Transportation department employment other than train and engine crews is down 9%, while the number of train crews has declined by 6%.

Maintenance-of-way and mechanical employment both have held relatively steady.

NS expects its headcount to drop by 3,000 positions, nearly all of it through attrition, by the end of 2020 as its locomotive fleet shrinks by 500 units and it, too, moves tonnage on fewer but longer trains beginning in July.

Union Pacific’s total headcount is down 7% since September, the month before it began shifting to an operating plan based on principles of Precision Scheduled Railroading.

The biggest reduction — a drop of 17% — has been to the mechanical forces that maintain freight cars and locomotives. UP has closed several car and locomotive shops and scaled back the operations of others across the system as it operates with fewer locomotives and freight cars. At the end of April, UP had more than 2,100 locomotives in storage.

The number of executives, staff, and assistants is down 11%, while professional and administrative staff has been reduced 12%.

UP’s train and engine crew headcount is down 3%, which is roughly in line with the decline in carloads so far this year.

Maintenance-of-way staffing is down 2%.

And what of BNSF Railway, the lone Class I railroad not adopting PSR?

The number of BNSF train crews has fallen 3%, roughly in line with the 4% drop in traffic volume this year.

Since February 2017, employment has risen on the U.S. operations of longtime PSR railroads Canadian National and Canadian Pacific. Employment on CN’s American subsidiaries is up 14%, while headcount on CP’s Soo Line subsidiary is up 6%.

Employment is up slightly on the smallest Class I railroad, Kansas City Southern, since 2017. KCS also is in the early stages of adopting an operating model based on the principles of Precision Scheduled Railroading.