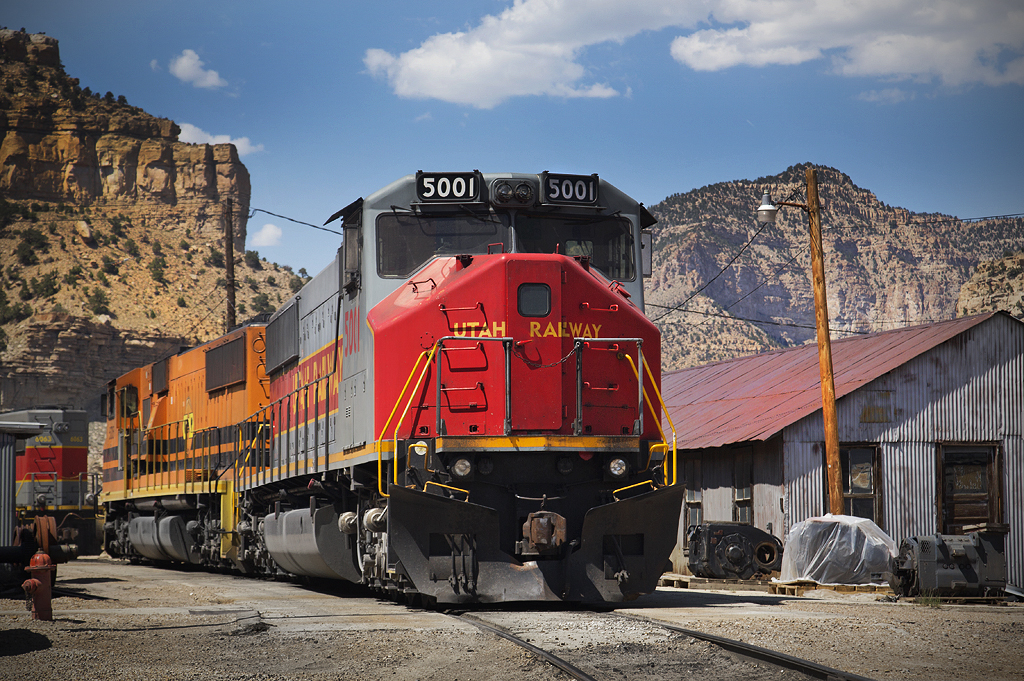 Utah Railway MK50-3 No. 5001 on the Utah Railway near Helper, Utah, in June 2015.
Chase Gunnoe
PHILLIPSBURG, Kan. — With the decline in coal traffic on the Utah Railway, Genesee & Wyoming has moved six Utah Railway units to its Kyle Railroad. BNSF Railway moved the MK50-3 units from Utah to Kansas this spring. Kyle also uses ex-Southern Pacific Tunnel Motor SD45T-2s on its ex-Rock Island route in Kansas and Colorado.

The engines were unique Morrison-Knudsen MK5000C demonstrators, built in 1994 with 5,000 horsepower V12 3612 Caterpillar engines. MK hoped to compete against the major locomotive builders for new locomotives and began its own high-horsepower locomotive program. A total of six examples were built, three in August 1994 for demonstration on Southern Pacific and another three in August 1995 for demonstration on Union Pacific. Due to termination of the MK Rail high-horsepower program neither railroad purchased the model, and they were returned after one year of demonstrations. Production was stopped in 1996.

In 2001, Utah Railway tested and later acquired all six units from Wabtec, the owner of MK successor MotivePower Industries. However, after one year of operation, all the units were out of service due to engine and alternator problems. EMD 3,500-hp 16-645F3B diesel engines were then installed to replace the Caterpillar engines. The six units were reclassified with the designation MK50-3 and returned to the Utah where they pulled coal trains on the Utah and over the former Denver & Rio Grande Western main line over Soldier Summit. The last Utah Railway coal train ran in December 2016, and with the units now excess, they were moved to the Kyle. Five units are in service with a sixth used for parts.

The Kyle Railroad was formed in 1982 by the Willis B. Kyle organization. Based in Phillipsburg, it operates 561 miles of track, mostly a portion of the former Rock Island Chicago-Denver main line. RailAmerica purchased Kyle in 2002. G&W purchased RailAmerica in 2012.