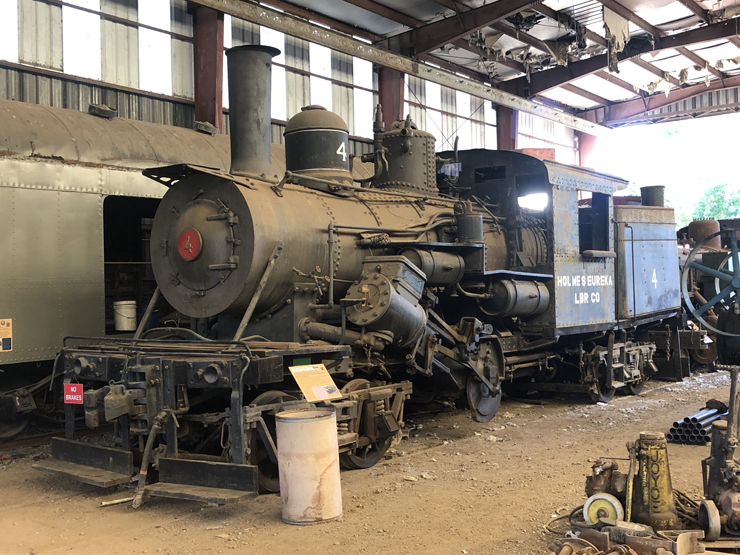 The Roots of Motive Power museum is inspecting this 1922-built Climax locomotive to determine if it can be restored to operation.
Kyle Stockman 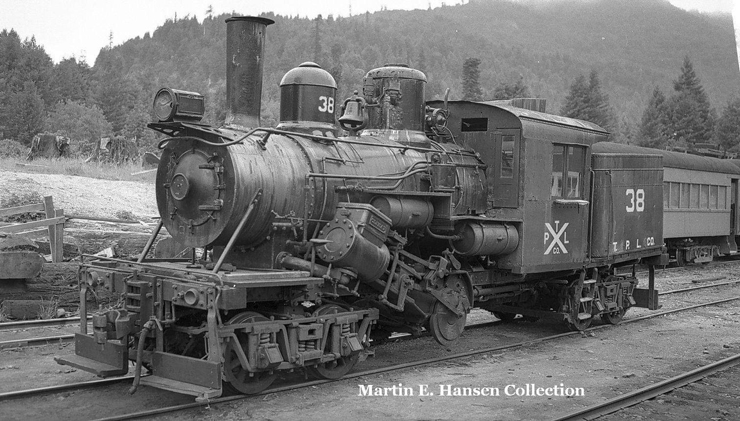 Holmes Eureka Lumber No. 4 during its operating career.
Martin E. Hanson collection
WILLITS, Calif. – A rare Climax locomotive is under restoration on the West Coast.
Holmes Eureka Lumber No. 4, a two-truck, 60-ton Climax built in 1922, is under restoration at the Roots of Motive Power, a railroad and logging museum in Northern California.
Early this year, a proposal was submitted to the Roots of Motive Power board of directors asking to do an inspection on the locomotive to see if a return to service was possible. It was enthusiastically approved and on Feb. 1 work began. The ultimate goal of the first phase is to pull the tubes out of the boiler and ultrasound the shell. If favorable results are found, then an operational restoration will move forward. Project lead Kyle Stockman, along with Roots members Jelani Hall and Eli Mosher, have removed most of the tubes from the boiler as well as other items. Since the locomotive only needs to meet state boiler code, all involved are optimistic No. 4 will be operational by its centennial in two years.
Of the almost 1,050 locomotives built by the Climax Manufacturing Co., only 20 are still in existence, and of those only three are operational worldwide. The oldest in operation, built in 1919, is the newly overhauled Moore-Keppel & Co. No. 9 at West Virginia’s Cass Scenic Railroad. Next is White Mountain Central No. 6. Built in 1920, it originally worked for the Beebe River Lumber Co. No. 6 not only has the distinction of being a wood burner but is probably the most used Climax to date as it ran nearly every day during tourist season since returning to service in the 1970s. Last is Puffing Billy Railway No. 1694, built in 1928 and operating in Australia.
Holmes Eureka Lumber was built in October 1922 and carries builders’ No. 1621. Its early life was spent in Humboldt County, Calif., hauling logs. Early in its life, a tree or other large object fell on the locomotive, damaging the engineer’s side of the cab and leading to a sag in the frame which is still visible today. The locomotive was sold in 1937 as No. 38 to the Pacific Lumber Co., in Scotia, Calif., where it worked many years before being retired. In 1955 Bert Rudolph purchased No. 38 and moved it on itsown wheels to his home in Willits, Calif.; it spent 35 years there until being acquired by Roots Of Motive Power. The locomotive at that point was rebuilt and repainted as Holmes Eureka Lumber No.4. Due to leaky flues it last ran in the early 2000s.

Roots of Motive Power is home to many pieces of local logging steam-powered equipment, including locomotives, steam donkeys, and cranes. Many are operational. Every year Roots has events open to the public, including the annual steam-up and barbecue in September where everything that can run will run, and annual Christmas trains.