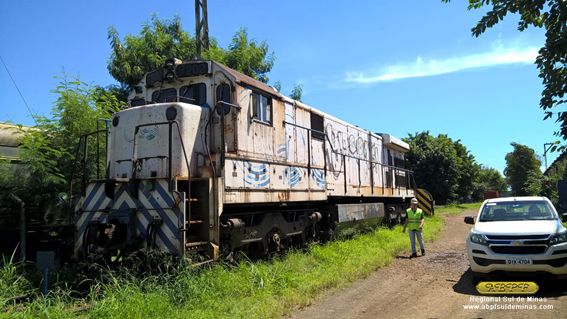 A GE-made Brazilian C30-7A that will be saved thanks to efforts of local volunteers.
Contributed photo
ARARAQUARA, São Paulo, Brazil — A South American preservation group has teamed up with Brazil’s largest railroad to save the country’s only surviving General Electric C30-7A locomotive. Earlier in July, the Regional Sul de Minas Chapter of the Brazilian Association of Railroad Preservation agreed to purchase Rumo Logistica No. 7202. The locomotive was owned by a recycling company after being retired in 2017.

The locomotive is one of seven C30-7As built for Brazil, according to Volunteer Bruno Crivelari Sanches. Conrail also owned C30-7As. The locomotive differs from the GE C30-7 because it has 12 cylinders instead of 16 cylinders. Crivelari Sanches tells Trains News Wire his group believes No. 7202 is the only locomotive of its type to be preserved. No C30-7s or C30-7As have been preserved in the United States, although the New Hope & Ivyland owns and operates one in Pennsylvania.

“This engine is important because it is the last one of its generation,” Crivelari Sanches says.

The locomotive has been sent to Rumo Logistica’s locomotive shop in Araraquara for a complete rebuild. The group will be looking for opportunities to run the locomotive once the restoration is complete.