NTSB's Sumwalt: 'The engineer was set up to fail.' 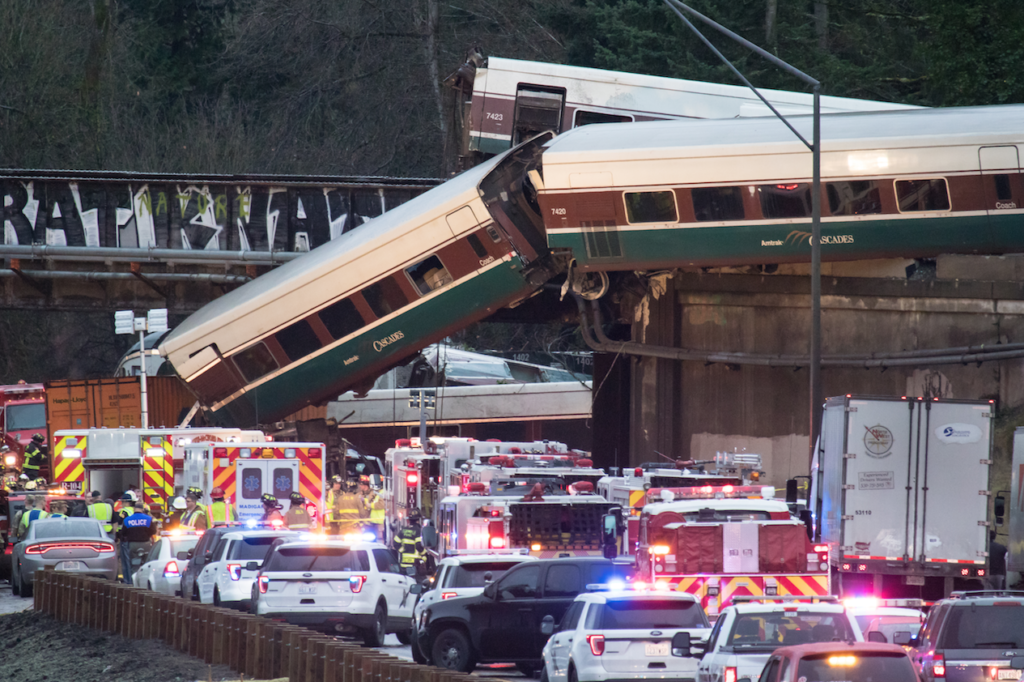 WASHINGTON — A systemic safety failure by state and federal agencies caused the fatal December 2017 derailment of an Amtrak Cascades train on its first run on a new route in Washington state, the National Transportation Safety Board concluded Tuesday.

The derailment investigation revealed a complex set of factors, including the pressure to put the new route in operation, the train crew’s unfamiliarity with the route, the absence of positive train control and the lack of adequate crash protections for the passengers.

The train sped into a 30-mph curve near DuPont, Wash., at 78 mph, on Dec. 18, 2017 and toppled over a bridge onto Interstate 5. Three passengers on the train were killed, and 57 passengers and crew members were injured, as were eight people in their vehicles on the highway.

The absence of positive train control contributed to the crash, the board concluded, as did Amtrak’s over-reliance on its host railroads, in this case Sound Transit, to manage safety risks. Further, the NTSB concluded that conventional passenger rail equipment would have offered better protection for passengers than the Talgo trainset in use.

The engineer and conductor on Train 501 were not familiar with the route, NTSB investigators concluded, and were given few visual aids to help them know the train’s location. The train’s engineer had little experience with the Siemens Charger locomotive he was operating and became confused by an overspeed alarm when it sounded.

“The engineer was set up to fail,” said Chairman Robert Sumwalt. “He was let down.”

Amtrak operates four daily Cascades roundtrips between those two cities, and was supposed to increase them to six. Amtrak has not operated any Cascades trains on the Port Defiance Bypass since the derailment.

The new line was supposed to allow Cascades trains to avoid the slower, curvier BNSF Seattle Subdivision, which follows Puget Sound and is busy with freight traffic.

One obstacle the project did not eliminate, however: That troublesome 30-mph curve at Milepost 19.86.

“Remember that curve,” a road foreman told NTSB investigators he said to the train’s engineer before the first southbound Cascades train to use the new route.

But investigators learned that the engineer missed two signs posted within 2 miles of the curve warning him to slow down. The engineer became distracted by the Charger’s overspeed alarm, which did not sound because he was approaching the 30-mph curve, but because he was 3 mph over the 79-mph limit on the track leading to it.

By the time he understood what the alarm meant, he’d lost any chance of reducing the train’s speed enough to prevent the derailment.

“During this period, he rarely looked outside the train,” said Stephen Jenner, an NTSB investigator who specializes in operations and human performance.

Positive train control, which can prevent overspeed situations, was not in operation on the Point Defiance Bypass at the time of the derailment.

Thanks to Congress, U.S. passenger and freight railroads had another full year at the time to implement PTC. The Rail Safety Improvement Act of 2008 originally mandated the safety system by the end of 2015. Railroads pressured lawmakers to extend the deadline, and they did.

But even if PTC been operational on the Point Defiance Bypass, investigators concluded that the Spanish-designed Talgo trainsets did not provide adequate protection to the train’s occupants in such a high-speed derailment.

NTSB investigators concluded that the three fatalities were caused by the train’s wheelsets becoming detached from the train. One set of detached wheels became a projectile that also struck multiple vehicles on the Interstate, causing more injuries.

“Had the rolling assembly not detached, we may not have had fatal injuries,” Sumwalt said.

Amtrak received an exemption from the Federal Railroad Administration nearly two decades ago for the Talgo trainsets. Under that exemption, they did not have to meet the design standards that otherwise apply to passenger rail equipment operating in the United States.

Mike Hiller, the investigator in charge of the Amtrak 501 team, said the FRA’s exemption for the Talgo equipment was “not in the public interest or consistent with railroad safety.”

Investigators concluded that the train’s conductor, who was in the process of qualifying on the new route, was unable to serve as the engineer’s second set of eyes the day of the derailment and help him operate the train safely.

NTSB board member Bruce Landsberg called it “the blind attempting to help the blind.”

A crew resource management system similar to the one embraced by aviation could help prevent a mismatched crew, the board noted.

Amtrak should also not rely on its host carriers to manage safety risks, it concluded.

“Amtrak should have taken a more proactive role,” said Ryan Frigo, an NTSB investigator who focuses on system safety.

Sumwalt said he was pleased that the board’s staff took a “deep dive.”

“That’s how we identify deficiencies that can be corrected,” Sumwalt said.