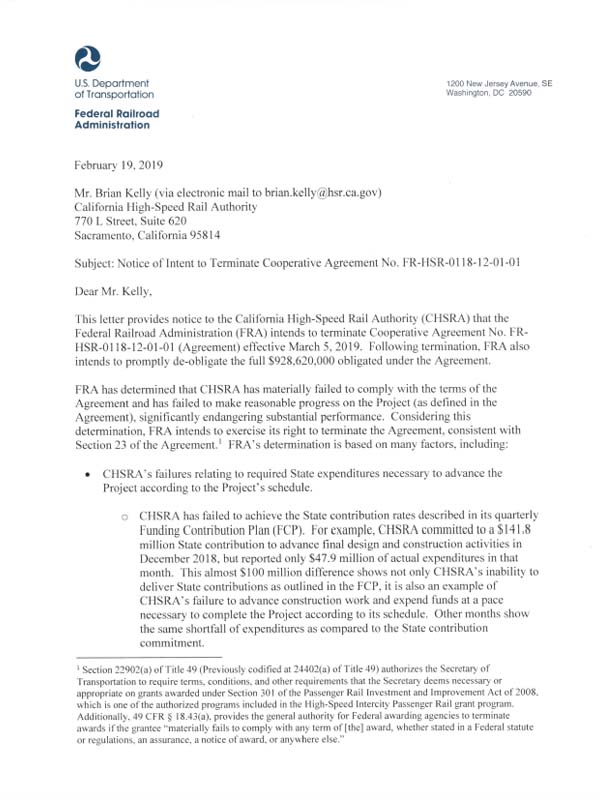 WASHINGTON – Federal Railroad Administration Administrator Ron Batory has sent a letter to the California High Speed Rail Authority announcing that the federal agency intends to terminate its existing grant agreement and “de-obligate” the entire $928.62 million grant that hasn’t been spent. The letter also states that the FRA is “is exploring all available legal options” to recover the nearly $2.5 billion in federal funds that have already been spent.
This follows California Gov. Gavin Newsom’s “state of the state” address last week in which he announced a scaled-back, 160-mile project in the Central Valley between Bakersfield and Merced, shelving plans to complete a Los Angeles-San Francisco system. A subsequent tweet meant to clarify that environmental work would continue, and the state wouldn’t be giving the money back, prompted a response from President Trump.

Beginning with management of the American Recovery and Reinvestment Act of 2009 grant during the Obama Administration, the FRA has challenged – but essentially accepted – the California High Speed Rail Authority’s explanation of why benchmarks in the agreement were missed.

But Batory’s letter cites the governor’s statement as “reinforcing concerns” and justifying termination, based on:

The letter, available below, asks for a response to these complaints by March 5.