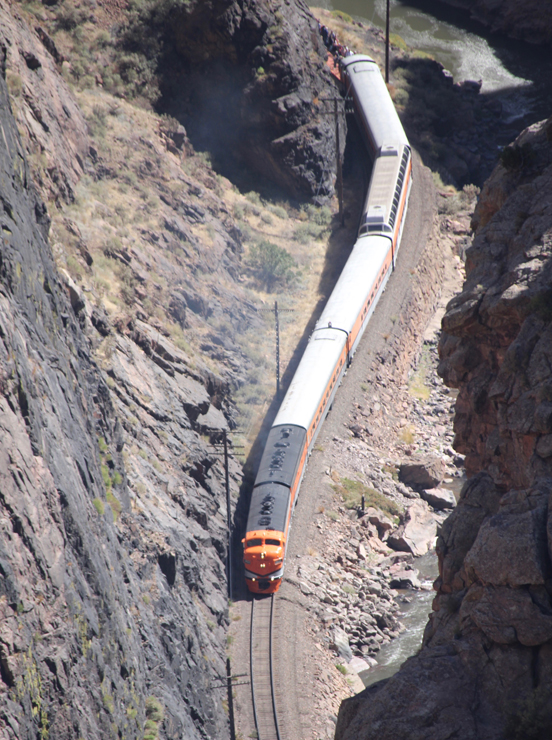 A Royal Gorge Route passenger train operates through its namesake canyon, at the eastern end of the former Rio Grande Tennessee Pass route, in October 2019. While this section of the line has been sold to a short line, Union Pacific is considering an offer for the remainder of the now-dormant Tennessee Pass line.
TRAINS: David Lassen

Last week, a Delaware-based limited liability company offered $10 million for the iconic route between Dotsero and Parkdale, Colo., as well as trackage rights into Pueblo. A spokesperson for UP confirmed on Monday that the railroad had been approached about selling the line.

“Union Pacific believes there could be business opportunities for the Tennessee Pass [route] in the future,” spokesperson Kristen South tells Trains News Wire. “We have received offers and are open to considering a deal that is mutually beneficial.”

Tennessee Pass was one of two main lines the D&RGW maintained over the Continental Divide. The 223-mile Tennessee Pass Subdivision between Pueblo and Dotsero featured 3% grades and most trains required helpers to get over the pass. UP took over the combined Rio Grande-Southern Pacific system in 1996 and a year later ceased regular service over the pass. The east end of the railroad, from Pueblo to Parkdale, was later sold to a short line, Rock & Rail, but UP maintains trackage rights. The Royal Gorge Route Railroad also operates excursions out of Cañon City.

While the railroad between Pueblo and Parkdale remains active, the 170 miles between Parkdale and Dotsero over Tennessee Pass have sat mostly unused, with the exception of the occasional movement of stored cars on either end of the line [See: “Tennessee Pass line sees freight traffic — for one day,” Trains News Wire, Feb. 26, 2019].

In the late 1990s, UP considered abandoning the line between Dotsero and Parkdale but later reversed that decision and decided to keep it for possible future use.

On Nov. 14, an attorney representing Colorado Pacific Railroad LLC sent a letter to UP offering to purchase the Tennessee Pass Subdivision. In 2018, Colorado Pacific purchased the former Missouri Pacific Towner Line in eastern Colorado and has since leased it to the Kansas & Oklahoma Railroad, a Watco short line. The letter notes that operations between Towner and NA Junction are expected to “commence shortly” following state approval.

In the letter to UP, the representative of the railroad writes, “[Colorado Pacific Railroad] proposes to restore the Tennessee Pass line to service, thus providing an alternative to using the Moffat tunnel and routing freight rail traffic through Denver.”

The attorney representing the Colorado Pacific declined to comment.

20 thoughts on “UP considering sale of Tennessee Pass route NEWSWIRE”