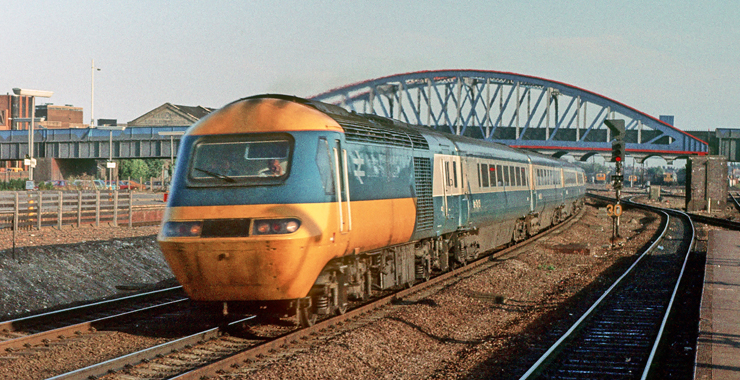 Displaying its original British Rail paint scheme is this HST, at Peterborough on the East Coast route in August 1984.
Keith Fender

In its final livery – for the new London North Eastern Railway franchise  — a London Kings Cross-to-Aberdeen HST heads north near Stonehaven, Scotland, on Aug. 17, 2019. The trains are about to be retired from East Coast service.
Keith Fender

LONDON — A four-day tour for the last of Britain’s 125-mph diesel “Intercity 125” or “High Speed Train (HST)” equipment has begun. A farewell four-day tour began Wednesday and continues through Saturday, Dec. 21, after which the trains will be removed from service on the London-Edinburgh-Aberdeen “East Coast” route.

The farewell trips sold out within hours of being announced in late November.

The trains were introduced to the route in 1978-79 but have now been completely replaced by new Hitachi-built, 125-mph dual mode (electric and diesel) multiple units. Other British rail operators will retain some HST equipment — some of the East Coast trains will switch to the slower Midland Main line (London-Sheffield) in January, to be used until new equipment (again from Hitachi) is built — but it will no longer be used at 125 mph.

The distinctive HST design will be around well in to the 2020s as two batches of modernized, shorter four-car sets will be used for regional rail services in Scotland and Western England for several years, although operation at over 100 mph will be rare.

In 1970 British Rail decided to build a 125-mph prototype diesel-powered HST, with diesel locomotives at each end of the train. It began trials in 1973 and production trains formed of between seven and eight cars were soon ordered. The first HSTs were introduced by British Rail on the Great Western route from London Paddington in 1976; they worked this route routinely operating at 125-mph until June 2019, when they were also replaced by dual-mode Hitachi multiple units.

HST deliveries lasted until 1982, with the East Coast route getting the new trains beginning in 1978. By the time production wrapped up, 197 power-car locomotives and 848 Mark 3 cars to go between them had been built. Each locomotive was built with a 2,250-hp Paxman Valenta 12R200L engine, giving 4,500 hp per train. Over the next 40-plus years, all the power cars were rebuilt with new engines, most receiving the MTU 16V4000.

The British HST holds the world diesel rail speed record of 148 mph, set on Nov. 1, 1987. An export version was built under license in Australia; those XPT trainsets are still in use although they, too, will soon be replaced.