Restored 4-8-8-4 concludes inaugural journey by bringing doubleheader with No. 844 to Cheyenne ahead of schedule 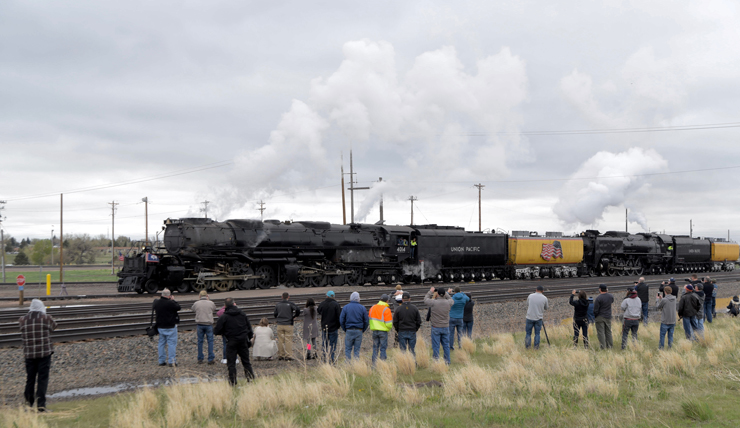 Nos. 4014 and 844, their round trip to Ogden completed, cut off from their train and head to the UP steam shop in Cheyenne on Sunday morning.
TRAINS: Jim Wrinn

CHEYENNE, Wyo. — On a cloudy day in which much of fabled Sherman Hill was socked in by fog, Union Pacific Big Boy No. 4014 and 4-8-4 No. 844 returned home, concluding the inaugural tour for the 4-8-8-4 in celebration of the 150th anniversary of the Golden Spike.

The two locomotives and their 12-car train ran an hour ahead of schedule for a change, owing to little Sunday morning freight traffic and an on-time departure from Laramie, just 60 miles away. The two had laid over there since Friday afternoon. They concluded a journey of almost 1,000 miles to Ogden, Utah, that started here May 4. The train arrived in Cheyenne shortly after 10 a.m. with the expected railfan motorcade and many local spectators lining Otto Road west of town.

The two steam locomotives cut off from their train and made their way to the steam shop while diesel No. 2650 stayed with the passenger consist and was preparing to take the cars to their home shop in Council Bluffs. Steam shop employees were seen preparing to move No. 844 into the shop. Dozens of people lined the street bridge that overlooks the shop for one more glimpse of the two engines.

What comes next for No. 4014? The locomotive concluded its journey to Ogden without serious mechanical problems. But like any locomotive, there will be adjustments. Many final cosmetic touches are yet to be completed. And then there’s the question of where the engine will go next: UP has said repeatedly that it plans to extensively tour the locomotive, which has not run in 60 years. Now that No. 4014 has proven itself on the main line, the next chapter will unfold soon.

Watch Trains News Wire for reporting on the Big Boy’s next action as details become available.