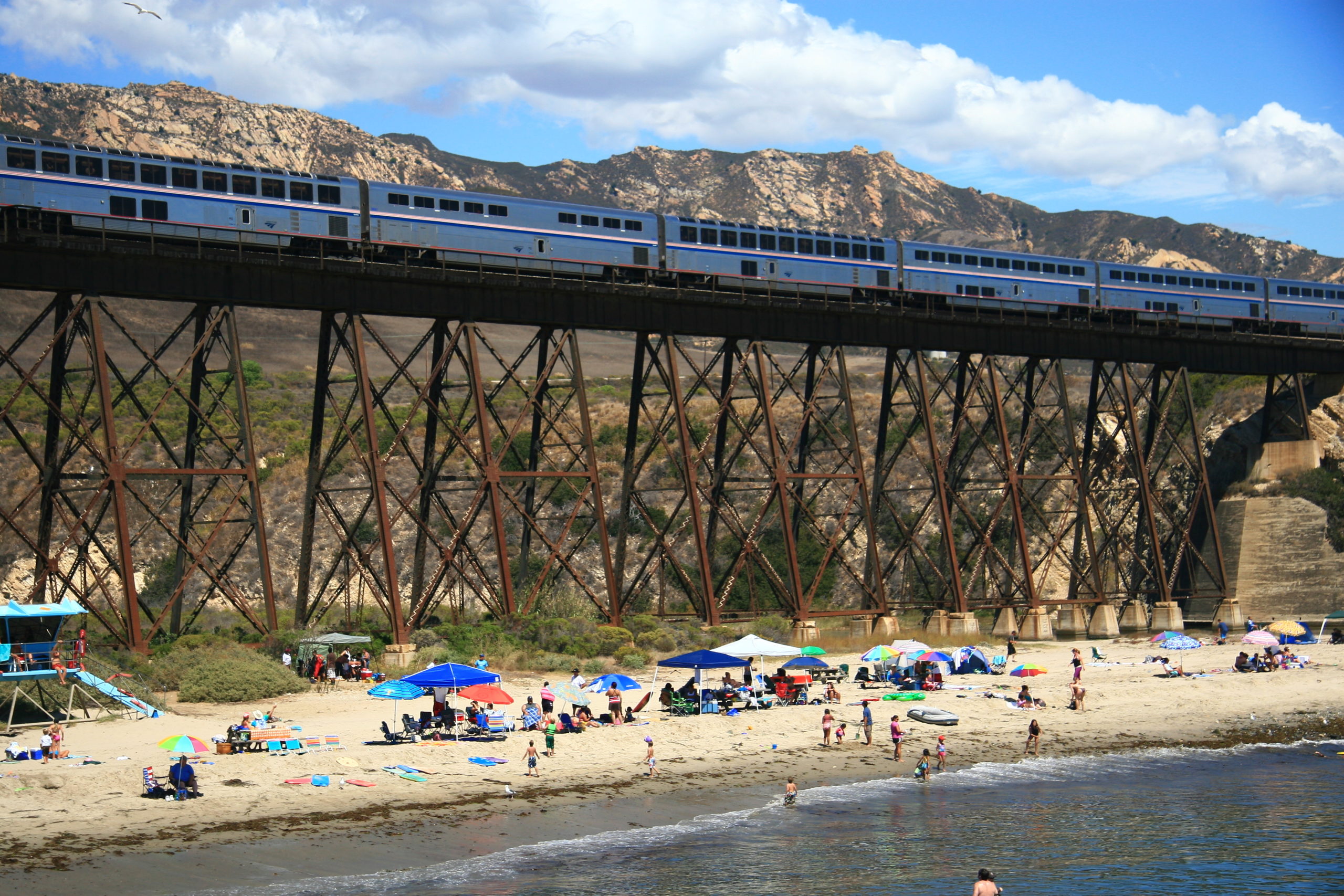 Amtrak’s Seattle-to-Los Angeles Coast Starlight crosses a trestle at Goleta, Calif. Pacific Parlour cars used in the train’s consist will soon be removed from Amtrak service.
Bob Johnston
The Pacific Parlour Cars, which were built by Pullman-Standard for the Atchison, Topeka & Santa Fe Railway as hi-level lounge cars and have been a regular part of Amtrak Los Angeles-Seattle Coast Starlight consists since the mid 1990s, will be permanently retired after Feb. 4, Amtrak spokeswoman Kimberly Woods confirmed Thursday.

Amtrak had initially planned to take the cars out-of-service for about a month for major repairs and return them to service in mid-March, but made the decision not to return them to service “due to safety concerns and the rising cost of maintenance,” according to an employee bulletin sent Tuesday. Woods attributed the decision to “an ongoing effort to modernize equipment.”

The Pacific Parlour Car currently offers the only lounge space and food service car that was open only to sleeping car passengers on the Amtrak system, outside of the Auto Train. It was also one of the last pieces of equipment built before Amtrak’s creation that the company still used in regular revenue service, other than the fast-disappearing Heritage dining and baggage cars. It and the baggage car have been the only non-Superliner cars in the Coast Starlight’s consist.

The Pacific Parlour Car is staffed by a dedicated attendant who serves lunch and dinner in the car by reservation, using a unique menu separate from that served in the adjacent dining car, and serves an afternoon wine and cheese tasting on both days of the Coast Starlight’s daily overnight journey. The wine and cheese tasting had initially been included in the fare for Sleeping Car passengers, but since 2015 it has cost $7 per person for wine plus an extra $5 per person for cheese, and has been open also to Business Class passengers.

“If you fly first class on an airline [you] expect a certain level of service. If that is taken away, you feel downgraded,” said Rail Passengers Association Chairman Peter LeCody. “Passengers should expect the Coast Starlight to retain some semblance of first class service because this is a train many ride primarily for the upscale experience.”

LeCody expressed a strong desire for Amtrak to replace the Pacific Parlour Cars with some type of Superliner lounge.

Amtrak has not determined whether the Pacific Parlour Car will be replaced by another dedicated lounge and food-service car for sleeping car passengers, or whether any other substitute amenity will be offered after Feb. 5.

“Customers will still continue to enjoy the spectacular views from other areas of the train, including the Dining Car and the renowned Sightseer Lounge Car,” Amtrak’s Kimberly Woods told Trains. “We will notify customers with existing reservations of the change.”

Also undetermined is whether Amtrak will attempt to sell the retired Pacific Parlour Cars or scrap them.