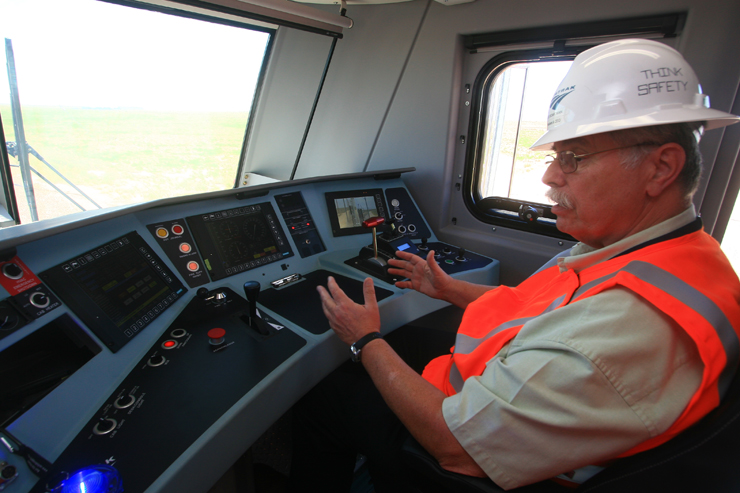 Joe Boardman gets the engineer’s perspective of a Siemens ACS-64 electric on a test track at the Transportation Technolgy Center in Pueblo, Colo., on July 29, 2013. A significant number of Amtrak employees were on hand for Boardman’s funeral Friday in Rome, N.Y.
Bob Johnston

Most striking about those who made the trip to upstate New York on short notice was the cross-section of people he influenced. They included:

— VIA Rail Canada Chief Mechanical Officer Mario Bergeron, who had held the same position at Amtrak

A fitting tribute to Boardman’s contribution during his eight years leading Amtrak was one long blast of locomotive horns across the system at 11:01 a.m. EDT on Friday. Funeral attendees inside St. Paul’s Church were able to participate thanks to Matt Donnelly, Amtrak’s Washington, D.C., Lead Brand Communications Specialist who affixed horns off of a decommissioned F40PH to the roof of his car in the church parking lot [see “Locomotive horns blow for Boardman funeral,” Trains News Wire, March 15].

“The horn salute was very emotional,” U.S. Rep. Paul Tonko (D-N.Y.) tells Trains News Wire. “Joe Boardman showed us that passengers come first and (Amtrak) is about connecting the country — the giant connector in Joe that had its roots right here at the Rome train station.”

Stephen Gardner, Senior Executive Vice President of Commercial, Marketing and Strategy Group, also attended the funeral, telling Trains News Wire that Boardman “respected everyone and people respected him for that. He was transparent, honest, and a straight shooter.”

The fact that so many people came and that rank-and-file employees around the system were saddened by Boardman’s death was expressed best by brother David Boardman’s eulogy when he said, “Joe knew the maintenance people, ticket clerks, and new employees. A guy that high up in the food chain cared about every person at Amtrak.”