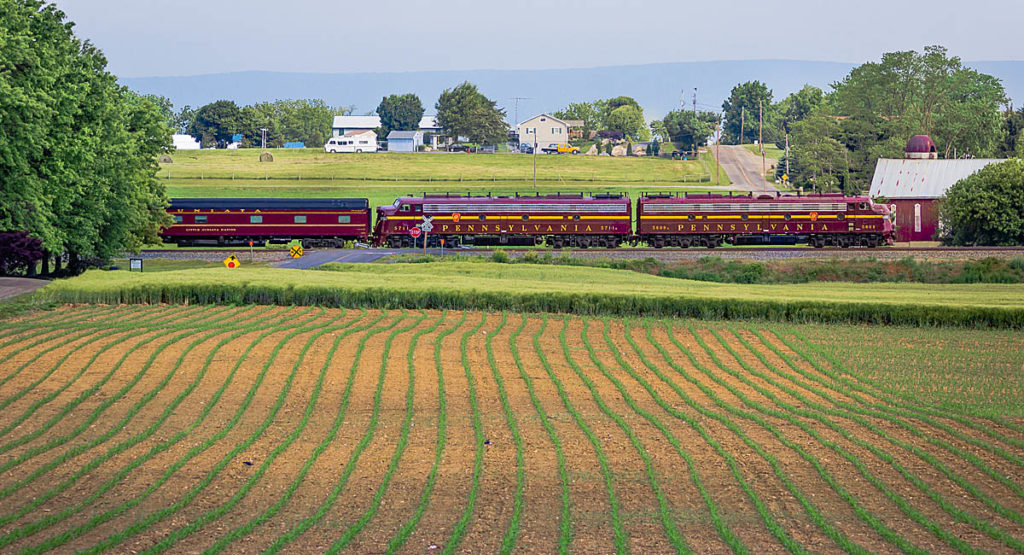 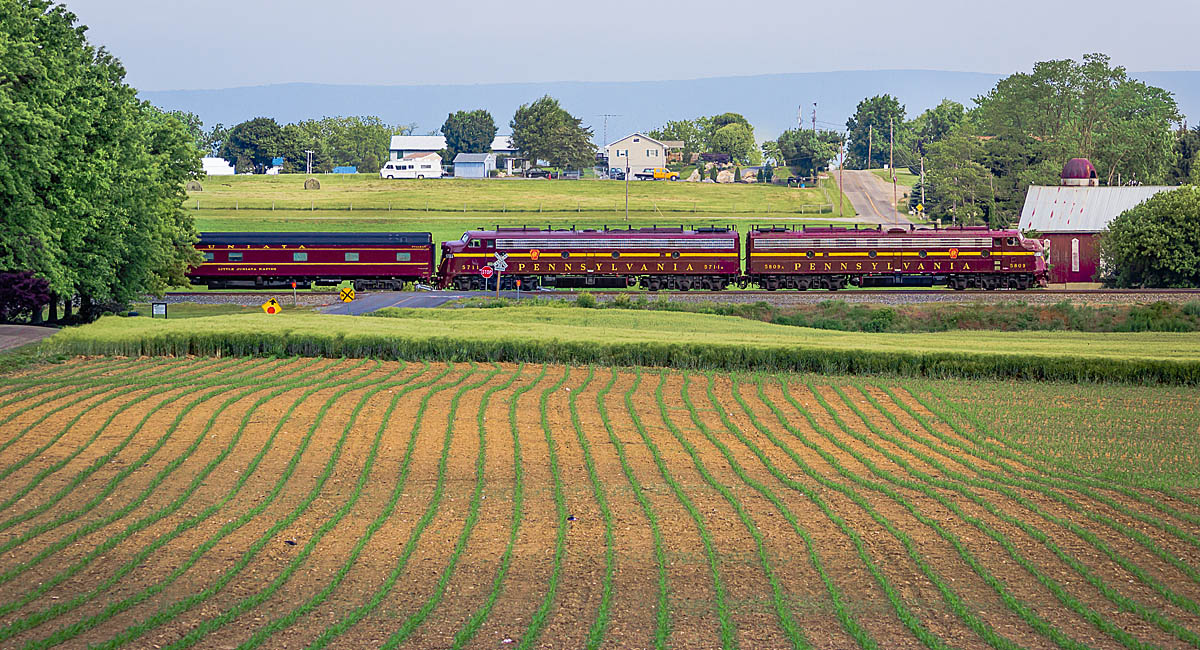 Pennsylvania Railroad-painted E units Nos. 5809 and 5711 lead special train through Lee’s Crossroads, Pa, in June 2014. The consist was returning from the Streamliners at Spencer railfan event in North Carolina.
Jonathan Wright
PHILADELPHIA —  One of the nation’s leading railway preservationists is calling on the enthusiast community to exercise restrain despite a call for action by several organizations involved in private cars, passenger trains, and steam excursions

Bennett Levin, owner of the Pennsylvania 120 office car and others as well as two well-traveled PRR E8 locomotives, says the enthusiast community may do more harm than good by contacting Congress to put pressure on Amtrak to reverse a recently imposed ban on special trains and a major curtailment of private car moves.

“I would urge everyone who claims to have an interest in this matter, from those who own the equipment to those who stand trackside and record its passing for history, to use reason and restraint, and not add fuel to an already raging fire being fed by ineptness, poor judgment, and short sightedness,” he said in a letter to National Railway Historical Society President Al Weber and echoed in a written statement to Trains News Wire.

Both the Association of Private Rail Car Owners and the Railroad Passenger Car Alliance have urged members to contact their elected leaders at the federal level.

Levin tells Trains News Wire that he’s concerned that such action by railfans and private car owners is ill-timed and nearing “hysteria.”

Levin says he believes Amtrak CEO Richard Anderson, a former airline executive who took over the railroad Jan. 1, is looking at the private car and special train issue as a matter to be thoroughly considered in the context of the railroad’s regular operations. Levin cited examples of bad behavior in recent years by private car owners or passengers that he says justifies Amtrak’s pause on excursions.

“Things have spiraled out of control. Neither of the private varnish organizations have taken positive steps to address these issues, so now Amtrak has said, ‘Enough,'” Levin says. “What Amtrak has done is not draconian. It is prudent.”

“The issue of safety is paramount. And the recognized and organized private varnish community has done a poor job recently in self-policing its members and instilling a culture of Safety First,” Levin says.

The two private passenger car organizations issued a joint statement Monday, April 16, in response to Levin’s comments. In it, alliance President W. Roger Fuehring, and association President Robert G. Donnelley say that their organizations have safety committees, have issued safety manuals to members, and that there have been no incidents or accidents that have been reportable to the Federal Railroad Administration.

In addition, the association “has denied membership to car owners who have a ‘poor safety’ record. Not all car owners, however, are AAPRCO or RPCA members,” they wrote. “Both organizations have investigated and take action on the occasional violations of our membership.”

With regard to private passenger car association members calling on members of Congress for help, the two men wrote that Amtrak’s changes were both sudden and severe.

“It is not surprising that some tourist railroad organizations, charterers, private car owners, and car owner associations have sought help from their legislators in view of the fact that Amtrak is a government approved monopoly receiving aid from the legislature,” they wrote.

The association and alliance’s full statement to Trains News Wire is online.

An Amtrak representative responded to a Trains News Wire request for comment on whether safety and passenger behaviors on private cars had a role in the recent policy changes, but only said, “We are still in the process of finalizing our private car policy and should be able to communicate that publicly in the near future.”

Levin says he worries that if car owners and railfans get their wish, and inspire intervention from Congress, the result may be something far worse than a decrease in the frequency of private passenger car trips on the national rail network.

Levin has said his trip with his locomotives and cars from Philadelphia to Altoona and return in May will be the last, as he does not plan to equip the units with positive train control gear.