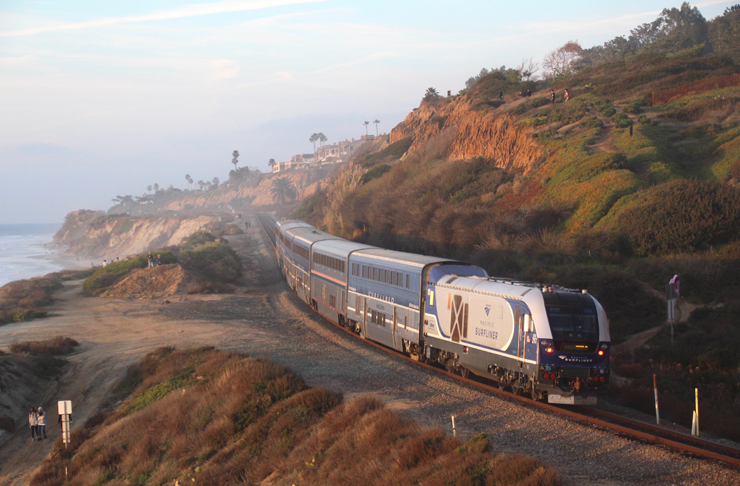 Amtrak Pacific Surfliner No. 785 heads north through Del Mar, Calif., just before sunset on Jan. 4, 2020. The San Diego Association of Governments is putting together a project to stabilize the slide-prone bluffs in Del Mar, but eventually wants to relocate the rail line inland.
TRAINS: David Lassen

CORONADO, Calif. — Transit agencies from San Diego, Los Angeles, and Austin, Texas, were among presenters at last week’s National Railroad Construction and Maintenance Association Conference at the Hotel Del Coronado. Some highlights from their appearances:

Jim Linthicum, chief of capital programs and regional services for the San Diego Association of Governments, outlined SANDAG’s $2.2-billion, five-year project to extend the light rail Blue Line north to the University of California San Diego in La Jolla [see “San Diego’s Mid-Coast Trolley on pace for 2021 opening,” Trains News Wire, Oct. 28, 2019 ]. The 11-mile, nine-station project will have no at-grade road crossings and includes more than three miles of elevated structures. Thirty-six months in, the project is under budget and, excluding days lost to rain, has slipped just four days behind schedule.

Linthicum also outlined SANDAG’s work on its 60-mile portion of the LOSSAN Corridor, the San Diego-to-San Luis Obispo route traveled by Coaster commuter trains as well as Amtrak’s Pacific Surfliners. A billion-dollar project to improve the route began about a decade ago, and has increased the amount of double track from roughly 50 to 67 percent. In the next 15 years, the “vast majority” will be double tracked, he said. Work is also ongoing to replace a number of the line’s wooden bridges, and the agency is working to plan and fund a $100-million project to stabilize eroding bluffs in the Del Mar area, where the tracks run atop the bluffs along the shoreline.

That, however, is a short-term solution — although in this case, the “short term” is being measured in decades. The long term plan is to realign the tracks inland, which will require extensive, and expensive, tunneling. The initial study has identified five possible alignments, ranging from $2.5 to $3.5 billion, but the current stabilizing plan will get “a few more decades” out of the current route, Linthicum said, “so we can get the money and clear it environmentally to build this tunnel. Those are just not easy undertakings.”

LA commuter railroad Metrolink has secured $1.5 billion in funding, mostly from state sources, for 16 projects that make up the first phase of its SCORE (Southern California Optimized Rail Expansion) program, said Justin Fornelli, Metrolink’s chief of project delivery. Eventually, SCORE aims to provide bidirectional service on all routes with at least hourly frequency, with 15-minute headways on some lines. The goal is to have that work complete by the 2028 Olympics.

That initial phase includes 14 projects — station, signal, junction, siding, and other capacity improvements — on the Ventura, San Bernardino, and Orange County lines. That will include 10 miles of new double track and quiet-zone projects. There are also two projects with systemwide significance — a new maintenance facility in Orange County, and the first phase of the “Link Union Station” project, which will turn L.A. Union Station from a stub-end to a through-track facility.

The Union Station project is projected to cost $950 million, with LA Metro handling new construction, estimated at $880 million, and Metrolink overseeing $70 million in work to upgrade the existing station throat, including track rehab and signal upgrades. “Once completed, it will open up a lot of flexibility for us and additional capacity,” Fornelli said. “In addition, it tees up for California high speed rail when it comes into Los Angeles. They’ll be using a lot of this infrastructure.

Dave Dech, vice president of rail operations for Capital Metro in Austin, Texas, outlined a forthcoming referendum that could bring extensive expansion of what is currently a rather modest rail sytem.

While most of Austin’s transit operations are bus lines, the city owns 162 miles of a former Southern Pacific rail line and currently operates a 32-mile, nine-station commuter rail line carrying about 570,000 passengers annually. Five sidings have been added to that line in the last year; one more is in the offing in 2020. The agency is also building a new $39-million, three-track station at its downtown terminus, as well as two new mid-route stations, one near an under-construction soccer stadium, and the other serving a major development known as The Domain. “These being in the middle of the alignment,” Dech said, “if we get the stations in the right place, I think we can get a lot of reverse-commute [riders].”

The upcoming Project Connect initiative [see “Austin transit proposal could include new rail lines, $9.8 billion price tag,” Trains News Wire, Oct. 31, 2019], if passed, would lead to extensive double tracking of the existing Red Line, and launch of the Green Line, from downtown to Manor, Texas, about 12 miles northeast of downtown. Two additional routes are envisioned, but no decision has been made if they will be bus rapid rapid, light rail, or commuter rail. A vote on the initiative will come in November.

“If you take the pulse of the city,” Dech said, “there’s a strong want for light rail. … We’re excited, and I’m excited to turn Capital Metro into more of a rail company than a bus company.”