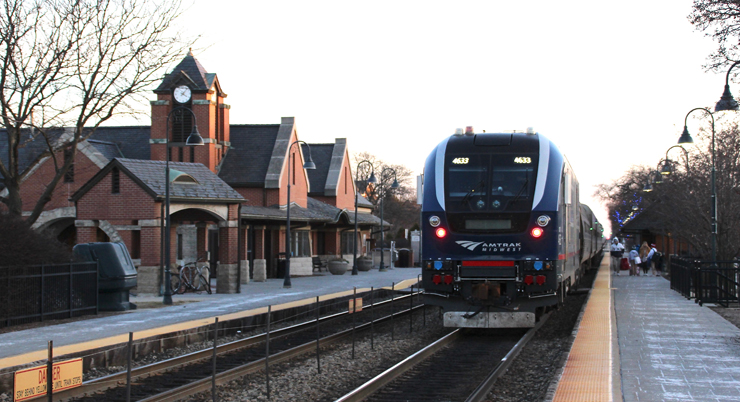 A southbound Amtrak Hiawatha pauses in Glenview, Ill., on Christmas Eve in 2018. The state of Illinois handed Glenview a significant victory in its fight against the expansion of Hiawatha service, saying it would no longer support plans for a new siding in the community.
TRAINS: David Lassen

SPRINGFIELD, Ill. — Bowing to opposition from the communities of Glenview and Lake Forest, the Illinois Department of Transportation will no longer support plans for two sidings that are part of a plan to increase Amtrak Hiawatha service between Chicago and Milwaukee.

Patch.com reports that acting IDOT Secretary Omer Osman said in a letter, released by officials in both communities, that “IDOT will not agree to the freight holding tracks in either Glenview or Lake Forest, and you have my commitment that IDOT will not be moving forward seeking federal support for this project.”

Glenview has spent more than $500,000 in city funds to oppose the plan for a 2-mile-long siding next to existing tracks through the community, used by the Hiawathas, Metra Milwaukee North service, and freight trains. Opponents cited pollution and noise concerns about trains being stopped on the siding. [See “Glenview, Ill., budgets more money to fight expansion of Hiawatha service,” Trains News Wire, April 10, 2019.] Another siding was proposed for Lake Forest, although Metra subsequently said that siding would not be necessary.

The sidings have been part of a plan proposed in 2016 to increase Hiawatha frequencies from seven to 10 round trips daily.