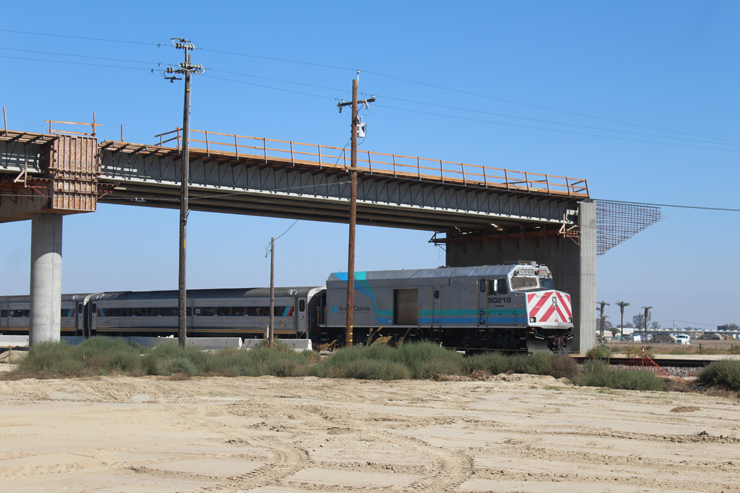 Behind the trees on the west side of the BNSF at Manning Avenue south of Fresno is Fowler Packing. The high speed tracks will shift to the current BNSF alignment here, requiring construction of two overpasses.
Bob Johnston

FRESNO, Calif. — In an effort to further involve businesses in construction and operation of its initial Central Valley segment, the California High Speed Rail Authority is hosting an informational meeting next week on how to become involved with the project.

The authority says the meeting “will provide an opportunity for interested small businesses to meet directly with the pre-qualified prime contractors and to learn more about the procurement.” It is to be held January 22 from 1 to 4 p.m. on the second floor at Fresno City Council Chambers, 2600 Fresno Street.

The authority announced in December that three firms were selected to bid on the final track and systems proposal for the initial 119-mile operating segment between Madera and Shafter, Calif. [See “A slow advance for high speed rail,” in Trains’ February “Passenger” column.] The qualified applicants are:

The three firms’ proposals are due by June 30, 2020. Before they are finalized, the forum will allow the competing organizations to “host informational tables to meet with potential team members, including small, disadvantaged, and disabled veteran-owned firms,” according to the advisory. Involving those businesses has been the authority’s stated goal from the outset, so incorporating local talent and expertise into the plan could enhance the probability of selection, assuming other evaluation criteria are met.

The authority has provided an overview of its track and systems procurement expectations here.

Meanwhile, as right-of-way construction continues through the Central Valley, Trains News Wire has learned that some accommodations are being made where possible to avoid disrupting businesses which might otherwise be forced to relocate if the line is built through their property.

Most notable is the situation south of Fresno where the authority’s route is positioned just west of BNSF tracks for 10 miles until the high speed right-of-way gradually climbs up and over to the east. But near the middle of that segment is Fowler Packing. Since 1950, the family-owned company has operated a plant west of the railroad at Manning Avenue and “has become one of the largest growers of table grapes and citrus in the nation,” according to its website.

Instead of insisting on maintaining a straight trajectory there, “the contractor will construct a shoofly to shift BNSF to the east,” California High Speed Rail Authority spokesman Micah Flores tells Trains News Wire. “High-speed rail will (gradually slip into) the existing BNSF alignment in that section; Fowler Packing will not be impacted and remain in its location,” he adds.