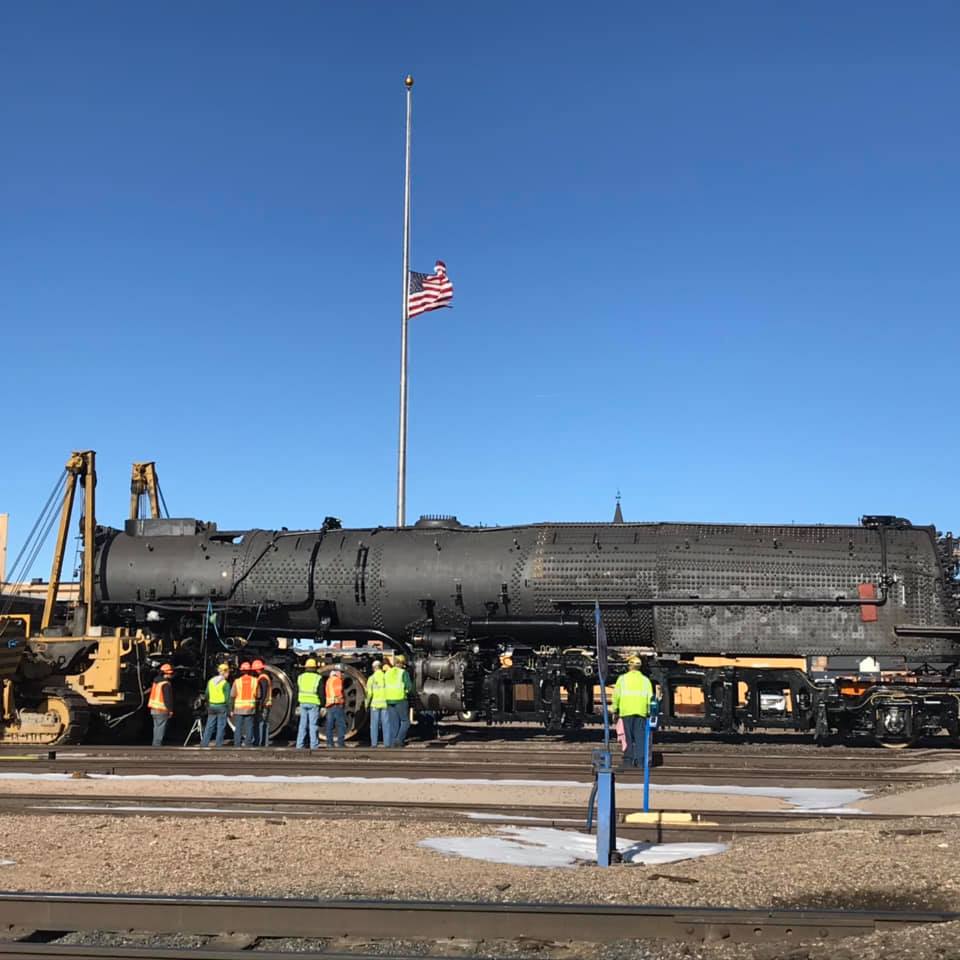 Photos published on Facebook news groups showed Union Pacific steam shop crews on Tuesday lifting the smokebox and boiler with side sideboom tractors and sliding the rebuilt front engine (the 4-8 in 4-8-8-4) under the boiler. The photos also show what appears to be an almost completed boiler with only the steam dome cover and smokebox inspection hatches missing and a complete backhead with valves, piping, waterglasses, and other controls.

Wheeling the locomotive is another major step forwarding in the restoration of the massive 1941 locomotive that is set to run in May as part of the celebration of the 150th anniversary of the transcontinental railroad completion. UP says it plans to send both No. 4014 and 4-8-4 No. 844 to Ogden, Utah, for the celebration. No Big Boy locomotive has run under its own power since 1959, and its restoration is unprecedented in the annals of American steam locomotive preservation.

Meanwhile, a notice published in the federal register Thursday shows that UP has asked the Federal Railroad Administration for waivers on Positive Train Control compliance for steam locomotives Nos. 844, 4014, and Challenger 4-6-6-4 No. 3985, which is stored out of service in Cheyenne.

Says the filing: “UP states these units are specifically designated and utilized on an extremely limited number of excursion trips annually. Excursions utilizing this equipment historically and continually involve the highest level of preparation in planning and operational safety during operation, giving special designation to each move. No less than two operators are present at any given time ensuring continual functional safety awareness during operational moves. UP explains they have been operating steam powered excursions without PTC-initiated application and have found no adverse mechanical effect on operational safety.”
Trains is offering a complete set of products related to the 25 Big Boy locomotives rostered by UP from 1941 to 1959. See kalmbachhobbystore.com.
Also, Trains are Special Interest Tours are teaming up to offer a Big Boy chase bus when it operates in May. See specialinteresttours.com for details.

5 thoughts on “Big Boy 4014 gets drivers; UP asks for PTC waivers for three steam locomotives NEWSWIRE”