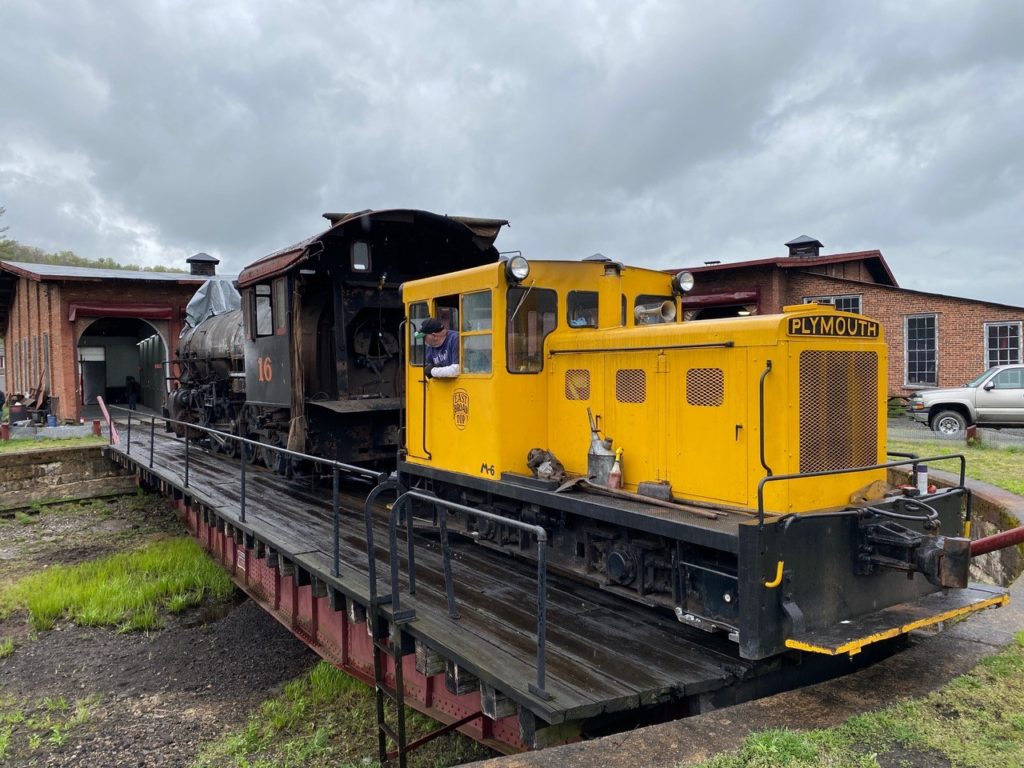 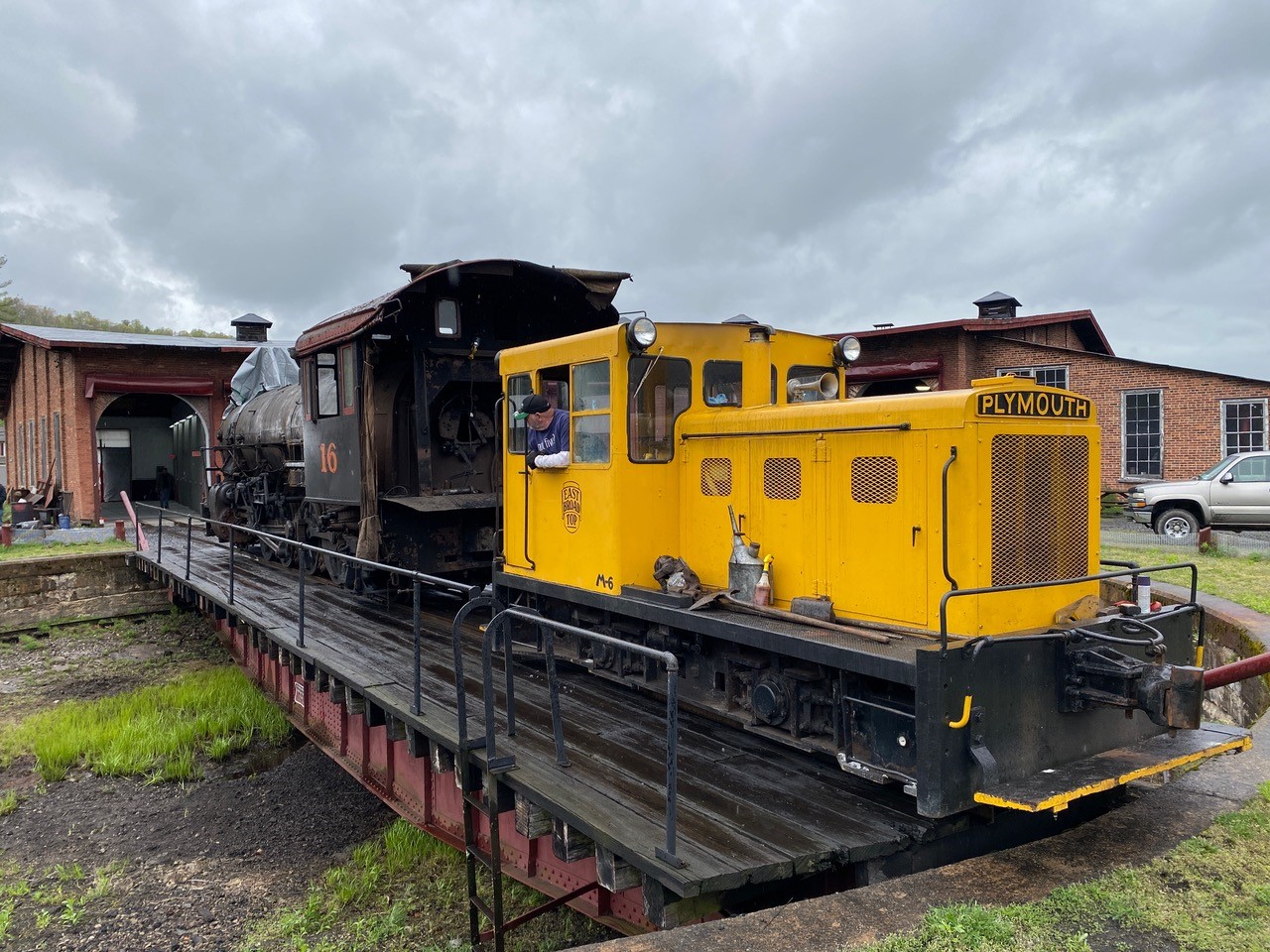 East Broad Top crew member Daniel Gilliland waits for a signal to shove East Broad Top 2-8-2 No. 16 into a newly renovated workspace in the roundhouse on May 6 for asbestos abatement.
EBT Foundation Inc.
ROCKHILL FURNACE, Pa. — Despite limitations imposed because of the current pandemic, the East Broad Top Railroad has been making steady progress in the three months since a new nonprofit foundation announced that it had acquired the narrow-gauge line. A small crew of employees has been hired, track work has begun, and one stall of the roundhouse has been converted into a modern workspace. All six of the railroad’s Baldwin-built 2-8-2 Mikado-type steam locomotives have been closely inspected, and two have been identified as candidates for early returns to service.

Last week, contractors removed asbestos boiler lagging from both locomotives. One of the two, No. 16, has not been in service since the Pennsylvania shortline ended common-carrier service in 1956, but it had been shopped in 1955 and initial inspections have indicated that it’s in good condition. The other, No. 14, was used regularly during the railroad’s tourist era and was overhauled in the 1980s with help from the Strasburg Rail Road. Form 4 work on No. 16 will begin shortly, with wheel work on No. 14 to follow this summer.

Brad Esposito, the EBT’s new general manager, said, “We have taken a very methodical and detailed approach in determining which locomotives would be the first candidates for repair, and we are extremely fortunate to have a very talented and experienced group of steam experts advising and assisting us in getting our program rolling. We are still working toward the goal of having an operable locomotive in 2021, barring any unforeseen issues.”

“Many thanks to Linn Moedinger, Zach Hall, Jason Lamb, and Davidson Ward and the folks from FMW Solutions for their help in helping us get things back up and running,” he said.

Asbestos abatement took place in the roundhouse’s just-overhauled stall 8, where a new concrete floor has been poured, complete with in-floor radiant heating, and modern lighting and updated electric service have been installed. As a first step in fire protection, new metal sheathing has been added to the wall separating stall 8 from the rest of the roundhouse; fire-suppression systems for the roundhouse and the railroad’s historic machine shops are currently in the engineering phase.

Track work has included rebuilding the failing tracks into stalls 5 through 8 and also rebuilding a long stretch of the lead into the locomotive shop, which is also due to receive a new concrete floor. The stub switch leading to the turntable has also been rebuilt, and the parking lot contains stacks of ties and mounds of fresh ballast in anticipation of additional switch rebuilds in the yard. Two hopper cars have been returned to service to spread ballast, and two passenger flats have been restored to their freight configuration for hauling ties. Rehabilitation of the main line to Colgate Grove will proceed this summer.

This week Woodford Brothers, a firm from western New York that previously helped stabilize the EBT’s Blacksmith Shop, has begun working on two portions of the main shops that have been beyond the capacity of the all-volunteer Friends of the East Broad Top. Once the project is complete, the Friends expect to begin restoring the line shafts and belts that power individual machines. The hope is not only to offer demonstrations for visitors but also to use some of the machines — particularly the wheel press and wheel lathe — for essential work.

The Friends have previously stabilized or entirely rebuilt much of the main shops complex, along with the foundry, the sand tower, and the freight house, and they are currently working on one of the EBT’s 19th-century combines, No. 14. The group was able to have one work session between the February 14 announcement and the spread of the coronavirus, and a record 66 volunteers showed up to work on track, clear areas in which Woodford Brothers will be working, scrape buildings in preparation for painting, and more. The April and May work sessions, however, were cancelled. Membership in the Friends has soared from 757 to over 1,100 since the announcement.

An open house in early June has been cancelled, in part because of the Coronavirus pandemic but also because so much work is currently going on at the railroad that welcoming visitors would be difficult. But Esposito and his crew still anticipate celebrating the 60th anniversary of the EBT’s first re-opening later in the summer.

Details will be posted to the railroad’s website and Facebook page as soon as plans can be finalized.

Members of the public interested in learning how they can help restoration efforts are encouraged to join the Friends of the East Broad Top organization. This non-profit group has been helping preserve as much of the EBT as possible until such a time as the railroad could be more fully restored. The Friends’ mission continues.