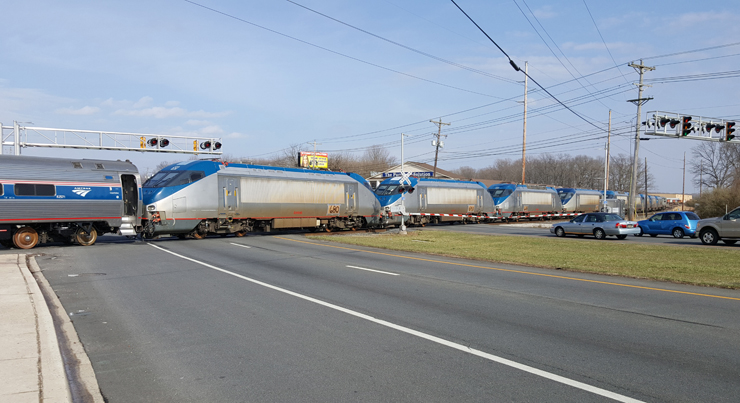 Nine decommissioned HHP-8 locomotives cross a highway in Bear, Del., in an March 27, 2017, work-train move from Amtrak facilities in Bear to the company’s Wilmington, Del., shops. Amtrak is being sued over the lease contracts for eight of its 15 HHP-8s.
Michael S. Murray

NEW YORK — Two investment groups are suing Amtrak over $92.7 million in payment they say they are due from the lease of eight Bombardier-Alstom HHP-8 electric locomotives.

The suit filed last week in U.S. District Court for the Southern District of New York by Philip Morris Capital Corp. and HNB Investment Corp. claims Amtrak breached the lease contract by cannibalizing” the locomotives “and otherwise improperly maintaining them. … As a result, Plaintiffs have been wrongfully deprived at least the $92,947,365 payment they timely demanded in December 2017.”

The suit, originally reported by Railway Age, says Amtrak decided in 2015 that maintenance and reliably issues with the HHP-8s made them unsuitable for use and retired them in 2016, triggering a provision in the lease entitling the leasing companies “all amounts due.” Amtrak said in December of that year that it would propose a buyout to resolve the issue by February 2017, but in January 2017, the suit says, “Amtrak replaced its [chief financial officer] and treasurer and began the campaign of duplicity and delay that forced this action.”

The 62-page complaint cites Amtrak maintenance reports and independent inspections to illustrate claims that parts had been removed from the locomotives, that required maintenance procedures were not conducted, and that the units were stored in unserviceable condition in breach of lease requirements.

Amtrak purchased a total of 15 HHP-8 locomotives, a dual-cab, 8,000-hp unit delivered in 2001. Plagued by reliability issues, all were retired by February 2015. The units that are the subject of the lawsuit were leased through 2022.

4 thoughts on “Amtrak sued over lease of retired locomotives NEWSWIRE”