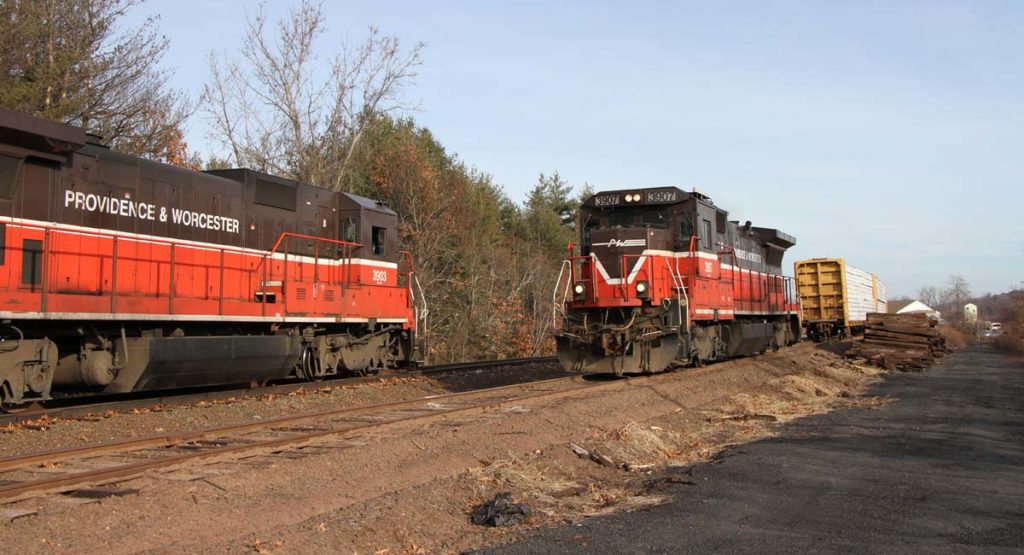 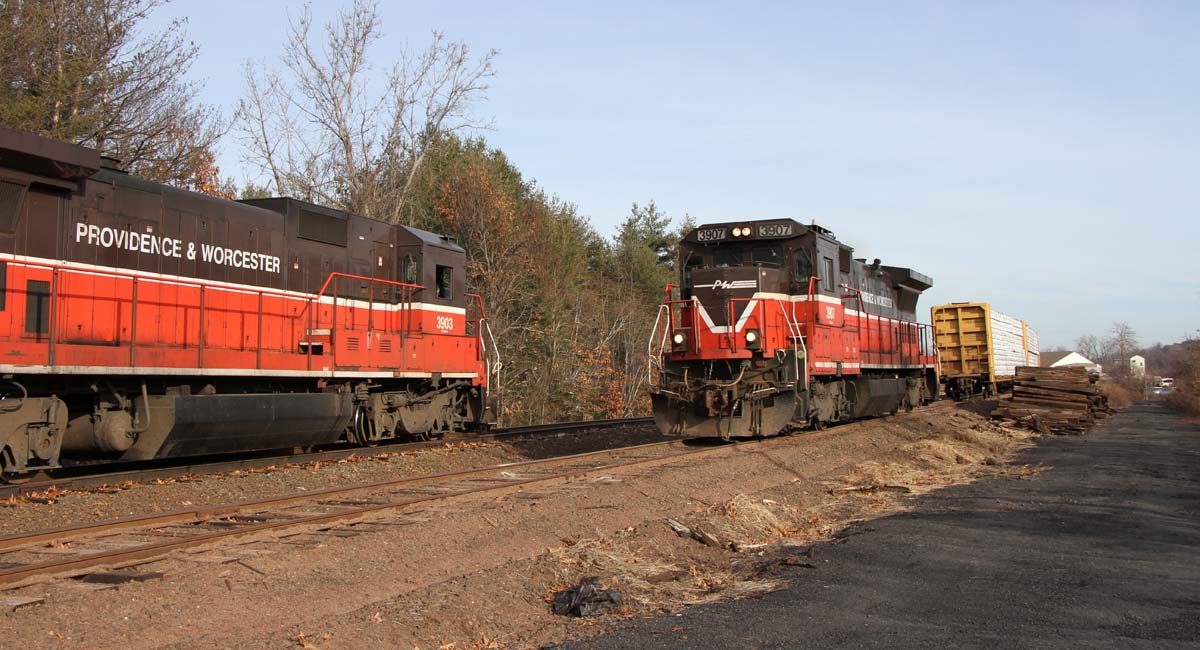 A Providence & Worcester local freight works a customer at Rocky Hill, Conn., on the Wethersfield Secondary in January 2019.
Scott A. Hartley
HARTFORD, Conn. – Genesee & Wyoming’s Providence & Worcester Railroad plans to reopen 8 miles of state-owned rail line in Hartford, Wethersfield, and Rocky Hill in April.
The north end of P&W’s Wethersfield Secondary, which last carried trains 11 years ago, is part of the former New York, New Haven & Hartford Valley Line that connected Hartford with Old Saybrook. The portion of the line that is being reopened has been mostly dormant since 1982, when Conrail stopped serving it. For about four years ending in 2008, Providence & Worcester ran a weekly train from Middletown to Hartford and return, hauling construction and demolition debris cars to exchange with Connecticut Southern Railroad in Hartford. P&W has continued to serve a lumber customer midway on the line in Rocky Hill, running trains north from Cedar Hill Yard near New Haven, through Middletown.
Most P&W Middletown-area traffic has made a lengthy roundabout routing via Worcester, Mass.; Groton; and New Haven. Genesee & Wyoming now both P&W and Connecticut Southern. G&W expects the shortened routing for Middletown-area freight will enable Connecticut-based business to decrease the travel time of shipments and allow for a much more competitive and improved supply chain.
In 2018, Genesee & Wyoming spent $750,000 upgrading the 16 miles between Middletown and Hartford, replacing 12,000 ties and adding 500 tons of ballast. Further right-of-way cleanup is scheduled for this spring.
The planned service of one train in each direction, running five days a week, will affect five cities and towns. Maximum speed will be 10 mph, and train length is estimated to be 25 cars, according to a March 6 presentation by the railroad and track owner Connecticut Department of Transportation in the town of Wethersfield. There, the line will be the closest to existing homes and businesses. The railroad and the agency reported that they had conducted diagnostic studies of 10 public crossings in the town, and that further signage and modifications are being made. The presentation included information on crossing awareness and safety.

Most rail freight moving between Springfield, Mass., and New Haven moves in Connecticut Southern trains using trackage rights over Amtrak’s busy 62-mile Springfield Line. Interestingly, the Wethersfield presentation included mention that a long-term goal of the project is to create an efficient and economical freight rail link between Springfield and New Haven. With the reopened Providence & Worcester trackage, G&W railroads will have their own route on the 36 miles between Hartford and New Haven.