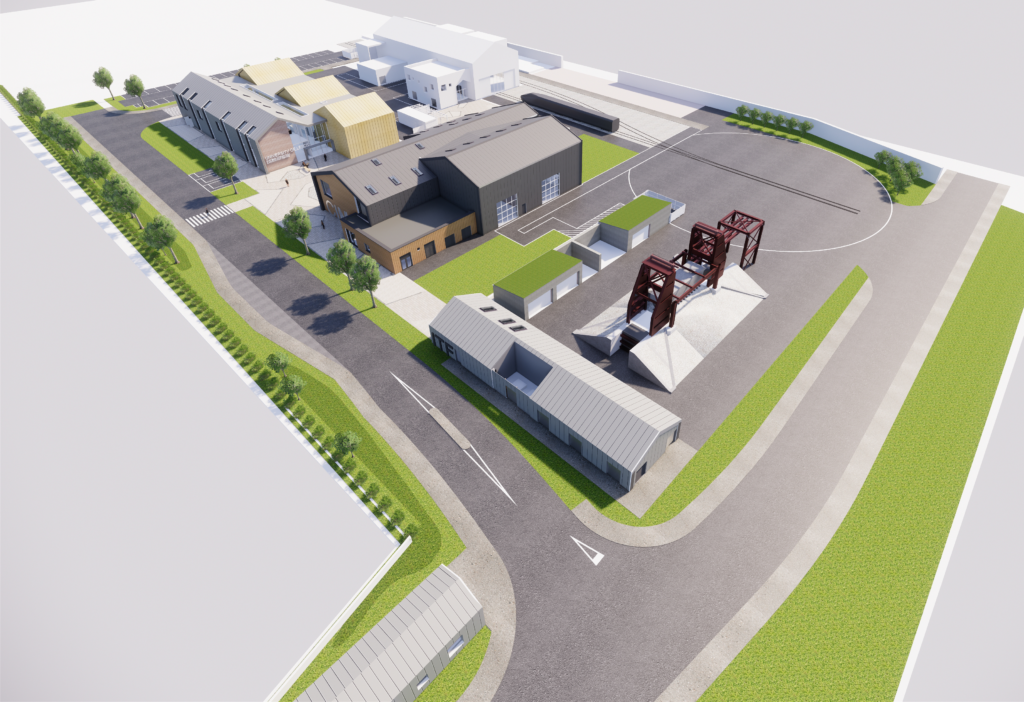 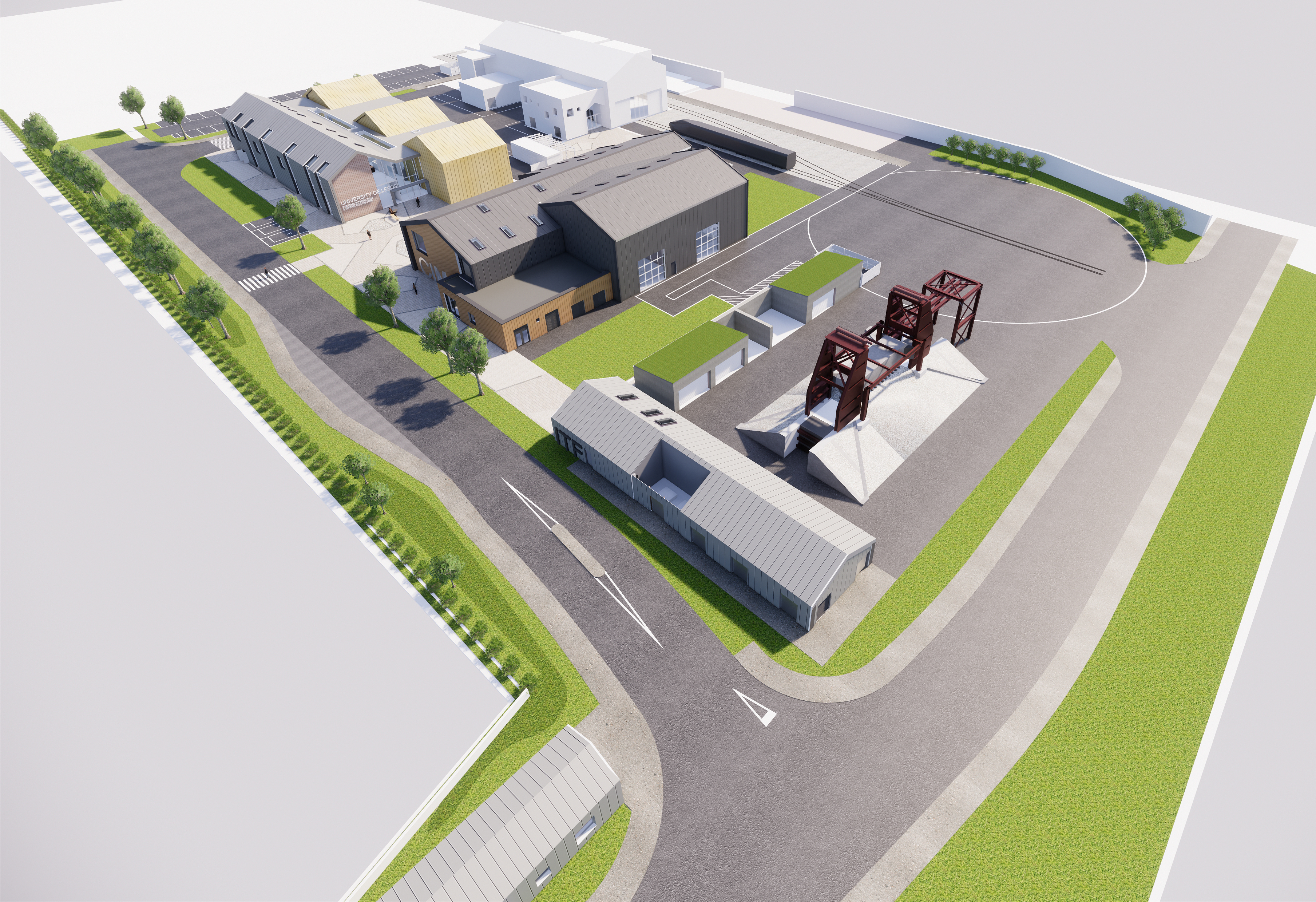 An artist’s rendering of the campus planned for the Institute for High Speed Rail and System Integration in Leeds, England.
University of Leeds
LEEDS, England — The United Kingdom government has today confirmed funding to create one of the most advanced conventional and high speed rail research facilities in the world, in Leeds.

The University of Leeds’ Institute for High Speed Rail and System Integration will revolutionise the way new railway systems are invented, developed and brought into service.

It will be located next to the Leeds City Region Enterprise Zone and forms the early phase of an ambitious plan involving local authorities and businesses to position the City Region as a U.K. center for rail engineering which will generate jobs and inward investment.

At the heart of the Leeds’ Institute will be the capability to investigate rail systems as an integrated whole: Measuring how train, track, power systems and signals interact as a unified system.

The cutting-edge facilities will result in research that will transform transport systems not only here in the U.K. but across the world.

The government has contributed nearly $14 million towards the capital costs of the project. About $50 million has come from the university and rail industry partners, adding to more than $16 million from the Leeds City Region Local Enterprise Partnership Growth Deal.

Jake Berry, minister for the Northern Powerhouse and Local Growth, said: “Improving transport for people across the North remains our priority so it is fitting that the research facilities at the University of Leeds’ Institute for High Speed Rail and System Integration, when developed, will revolutionize the transport system and benefit passengers by ensuring it is fit for the 21st century and beyond.

“Universities across the Northern Powerhouse have a strong tradition of being at the forefront of scientific research and innovation and that is why continued government investment in our higher education institutions is so important.”

The government’s support to the Leeds Institute has been allocated from the U.K. Research Partnership and Investment Fund, administered by Research England to develop facilities that enable world-class research. Every U.K. £1 invested by the government requires double-match funding from non-public sources such as businesses or charities.

Professor Lisa Roberts, Deputy Vice-Chancellor: Research and Innovation at the University of Leeds, said: “The real power of the Institute is that it has been designed with the rail industry, to help it address some of its big research questions. Working together with industry we will play a big role in future rail innovation.

“If you look at the government’s industrial strategy, never before has it been so important for universities to work with business and industry and the [research fund] scheme is truly catalysing those collaborations.”

The aim is for the Institute to become fully operational in 2021.

The Institute for High Speed Rail and System Integration will be sited on the Leeds City Region Enterprise Zone at Gateway 45, near junction 45 of the M1 motorway.

Peter Hendy, chair of Network Rail, said: “This new testing facility will be one of the most advanced in the world and will revolutionise the U.K.’s approach to high speed rail system design and implementation.

“Not only will it reduce the number of issues we see on the operational railway, it will help to bring economic growth and jobs to the area for many years to come. Network Rail is keen to support this bold initiative by the University of Leeds.”

Advanced technology
At the heart of the Institute will be three cutting-edge test facilities:

Vehicle testing
The rig is based on the idea of a “rolling road” — and has variable track geometry which can be programmed, so it can replicate any rail journey in the world and is capable of testing performance up to 400 km/hr. The facility will allow research into new traction systems, braking, new materials and ways of increasing energy efficiency. It will accurately test rail vehicle performance under real-world conditions.

Infrastructure testing
A second test facility will simulate the forces on track, ballast and support structures, such as embankments, for both conventional and high speeds trains up to about 250 mph. It will be built in an open field rather than a laboratory, allowing ground dynamics to be more accurately simulated.

System Integration and Innovation Center
This center introduces the capability to investigate train, track, power systems and signals as an integrated system, to investigate how changes to one part of that system interacts with another part. It will be able to analyze data from the vehicle and infrastructure testing rigs. The center will, for example, allow investigations to be conducted into digital signalling, power systems, and electro-magnetic interference.

Professor Peter Woodward, head of the institute, said: “The institute will revolutionize the testing, commissioning and building of new trains, rail infrastructure and systems, both in the U.K. and overseas.

“The capabilities of the test facilities are of global significance and I’m very grateful for the significant support we have received from all the companies and organizations that have helped us over the last two years.

“It’s a great time to be in rail, and with the new capability that the institute represents, the U.K.’s railway future is looking very bright both for industry and for passengers.”

Mark Thurston, CEO of HS2 Ltd. said: “The government’s commitment to deliver this final piece of funding for the Institute for High Speed Rail and System Integration is a further sign of confidence in the economic benefits and boost to jobs and skills that high speed rail is delivering, not just for Leeds and the north of England, but for the U.K. as a whole.

“High Speed Two will operate between London and Birmingham in 2026, extending to Leeds in 2033, and this world-class rail research facility will be integral to the long term success of high speed rail in Britain.”

Bombardier Transportation designs and builds trains for the U.K. and further afield. Working with Hitachi, it has developed the Frecciarossa 1000 for the Italian rail network — the fastest and quietest high speed train in Europe.

Robert Davies, High Speed Train Bid Director at Bombardier Transportation, said: “The Institute for High Speed Rail and System Integration will be a very significant addition to the U.K.’s rail capability, and we are already engaging with the institute on how we can use the facilities it will offer for the trains that we design and build in Britain.”

Boost for the Leeds City Region
The Leeds City Region economic growth plan says the Institute will act as a catalyst for investment in new transport technology companies and the wider rail industry. HS2 has already said that its eastern supply depot will be next to the test facility.

The more than $16 million contribution towards the institute from the Leeds City Region Local Enterprise Partnership Growth Deal is part of a $1.25 billion package of government investment delivered in partnership with the West Yorkshire Combined Authority to accelerate growth and job creation across the Leeds City Region.

“The test facility will attract companies working in the railway supply chain. Combined, they have the potential to bring in thousands of skilled jobs, ensuring our region is not just at the forefront of today’s technology but is shaping the transport systems of tomorrow.”

Judith Blake, leader of Leeds City Council, said: “The Institute for High Speed Rail and System Integration has a key role to play as a world-leader in engineering excellence, new infrastructure, innovation and learning.

“Located next to the HS2 depot, it is a further significant endorsement of the Leeds City Region Enterprise Zone as a key economic driver for the city and the wider region.

“It also fits perfectly with the council’s Inclusive Growth Strategy, generating inward investment and jobs and offering opportunities for young people in Leeds and the region to learn cutting-edge skills in what is sure to be a leading industry supporting our future national transport network.”

Together with the Institute of Railway Research at the University of Huddersfield, the High Speed Rail College in Doncaster, the Network Rail Campus in York and the manufacturing capabilities of the Leeds City Region — all in England — there is an unprecedented economic opportunity for advanced manufacturing, engineering and education in the region and the north, to complement the Northern Powerhouse agenda.