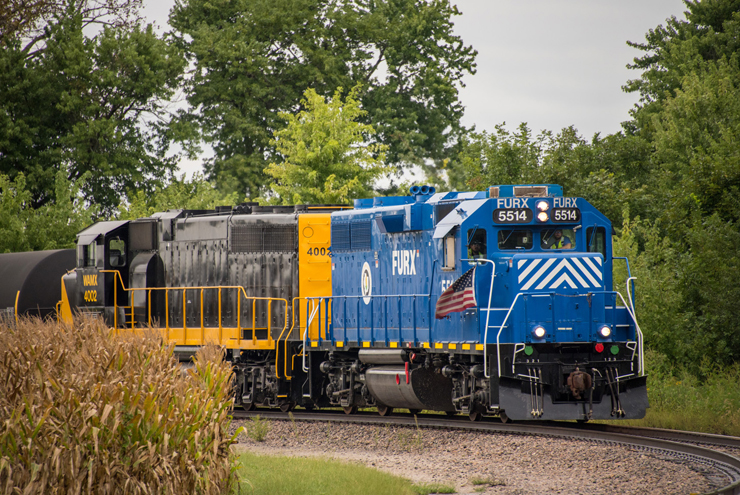 DECATUR, ILL. — The Midwest has a new railroad.

The Decatur & Eastern Illinois Railroad made its inaugural run out of Decatur on Sunday, Sept. 9.

The first revenue move left the Decatur yards on Sunday morning behind a pair of leased units, blue FURX GP38-2 5514 and WAMX 4002, a former Canadian National Railway GP40-2LW. Most of the initial trip to Paris, Ill., was in a light rain. The two-man crew displayed an American flag on the lead locomotive.

Watco Companies LLC., based in Pittsburg, Kan., was the winning bidder on 126.7 miles of the CSXT Decatur Subdivision and the Danville Secondary, put on the block in January 2018. The route is part of 650 miles of lower-density lines CSX wants to sell.

The new railroad will interchange traffic with CSXT at Terre Haute and Hillsdale, Ind.; the Eastern Illinois Railroad at Metcalf, Ill.; Union Pacific at Tuscola, Ill.; and the CN and NS at Decatur.

Paris, where many of the railroad’s on-line customers are located, is the planned headquarters of the new railroad. Three shippers are in the Paris Industrial Park, along with a Cargill Dry Corn Ingredients elevator.

While the Decatur to Paris run took place, another local worked Paris using leased Indiana Railroad GP38-3s 3801 and 3808. The company has applied a new logo to several of its locomotives, featuring an ear of corn framed by the outlines of Illinois and Indiana.