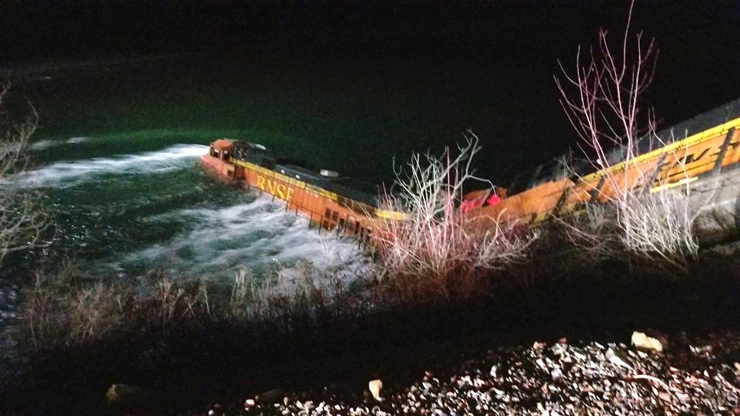 More than a week after a derailment along Idaho’s Kootenai River closed BNSF Railway’s main line to the Pacific Northwest for nearly three days, two locomotives are still in the water.

On Jan. 1, a westbound manifest freight train derailed at about 8:50 p.m. near Katka, about 10 miles east of Bonners Ferry, on the Kootenai River Subdivision. Three locomotives and six cars went off the rails.

The train derailed after hitting a rock slide.

This week, KHQ News in Spokane, Wash., spoke to Adam Reeves, a BNSF Railway employee and volunteer member of the local search and rescue team who was the first on the scene of the wreck. Reeves tells the TV station that he climbed out on to the locomotive and smashed the cab window to help get the crew out as the locomotive filled with water. The three men then waited on top of the locomotive until a boat could rescue them.

“People call me a hero. I don’t want to be labeled as a hero,” Reeves says. “It’s nothing special, I mean, it just happened that my paying job and volunteer job collided and was able to be beneficial in that sense.”