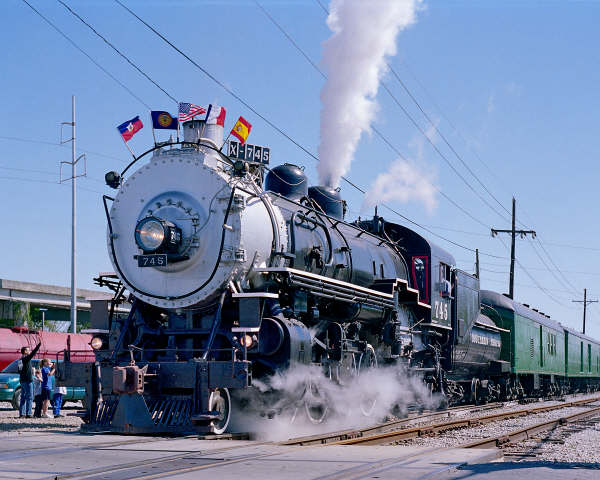 SP 2-8-2 No. 745 will run Dec. 15 in New Orleans.
LASTA
NEW ORLEANS, La. — On Dec. 15, Southern Pacific steam locomotive No. 745 will pull a Christmas train through some of New Orleans’ most historic neighborhoods. It is the second excursion in two years for the 2-8-2, which for many years prior was limited to steam-ups on the grounds of the Louisiana Steam Train Association.

Santa’s North Pole Steam Train will board and depart from the tracks at The Fly by the rear of Audubon Park and will then travel to Blaine Kern’s Mardi Gras World. There, passengers will depart for a Christmas party that includes a showing of the movie Polar Express. Afterwards, the train will pick up Santa Claus before heading back to The Fly.

Tickets start at $125 and include a membership to the steam train association. Due to high interest in the 2017 Christmas train, this year’s event will feature two separate departures at 10:30 a.m. and 3 p.m.

No. 745 was home-built by the Southern Pacific in 1921 at its Algiers Shop, located just outside of New Orleans. The locomotive was donated to the city of New Orleans after being retired from service and was placed on display in Avondale Park. In 1984, it caught the eye of preservationists who hoped to restore it to functioning condition, and their efforts bore fruit in 1997.