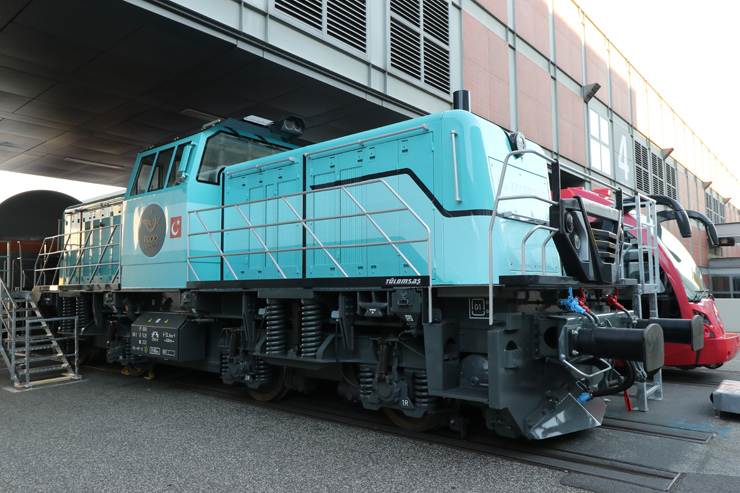 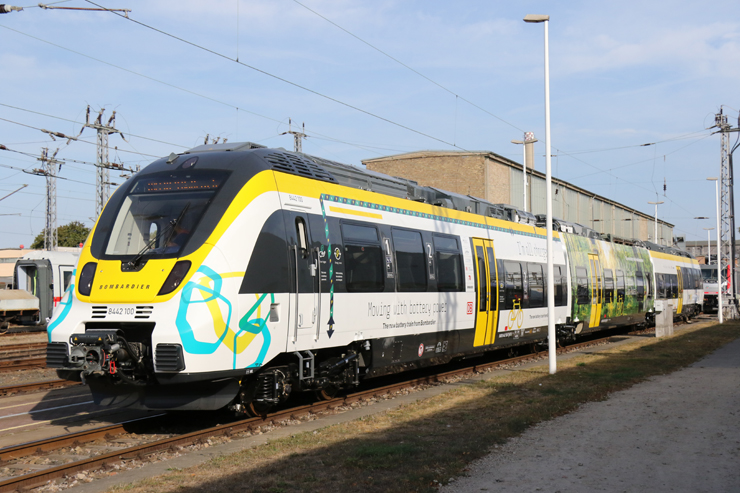 BERLIN — If there was one recurring theme at the 2018 InnoTrans rail trade fare, it was the rise of battery power.

Manufacturers in Europe and Asia now view battery-powered equipment as a leading alternative to diesels, particularly to meet emissions limits in urban areas and as a substitute for electrification of some regional rail routes, particularly in Europe.

In contrast, at the previous InnoTrans in 2016, the big alternative-power news had been Alstom’s debut of its hydrogen-powered train (which also packs two 111-kWH-rated lithium ion batteries to store energy. The first of those trains began service earlier this year. [See “Hydrogen-powered passenger trains enter service in Germany,” Trains News Wire, Sept. 18, 2018]

Battery-powered trains are not new; battery-powered locomotives were built in several countries in the late 19th century, and some battery-powered multiple units appeared in the 1920s. In post-World War II West Germany, rail operator Deutsche Bundesbahn ordered over 230 single-car battery railcars in the 1950s — so-called “lightweight” equipment, even though they required 22 tons of lead-acid batteries and offered a total power rating of 350 kWh.

But modern battery technology is significantly different; the development of lithium-based batteries, which can pack more power for less weight, has been key to making a phone that will last a day or an electric bus that can operate all day long with no or minimal re-charging. 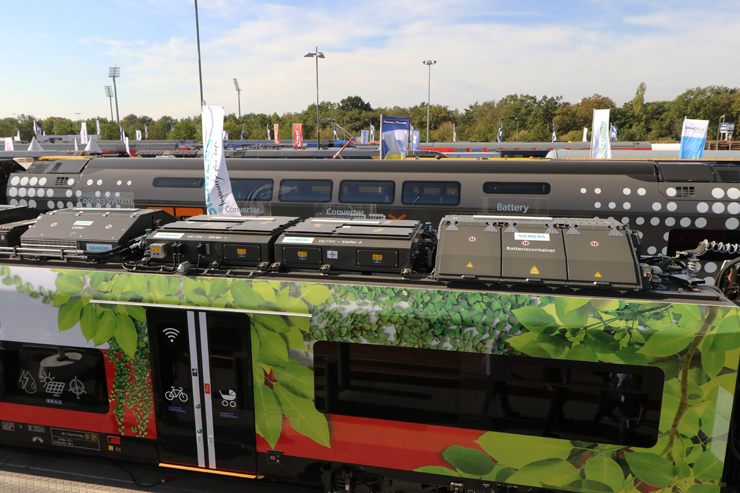 The batteries on the roof of the Siemens Cityjet Eco train.
Keith Fender

Among the new equipment of note:

— Bombardier arranged a media trip on its Talent 3 battery-powered EMU at its Hennigsdorf factory near Berlin. It was hardly a real-life demonstration — the test track is less than a mile long — but it did prove the train could start without the aid of overhead wires and attain around 40 mph in a short distance. Bombardier say the prototype train should be able to operate on batteries for 25 miles between recharges, which will take 7 to 10 minutes if it is stationary and powered by overhead power catenary. It has 300 kWh of battery power, offering 1,340 hp of traction power at up to 88 mph, at about two-thirds the cost of using diesel fuel. Tests in passenger service are planned in southern Germany next year.

— Siemens presented the CityJet Eco battery EMU, equipped with three roof mounted lithium-titanate battery units, at InnoTrans. Built for Austrian state rail operator ÖBB, its passenger trials are planned for next year, offering one-seat rides from non-electrified branches to nearby big cities. Siemens plans that production trains will be able to operate on battery power at 100 mph; the test train is limited to 75 mph.

Battery trains are heading to the U.S., too. Railroad Development Corp Chairman Henry Posner III, talking to Trains at InnoTrans, confirmed British specialty train builder Vivarail, part-owned by RDC, is planning to build battery versions of its D Train for trial use in the U.S. in 2019. Vivarail rebuilds former London Underground equipment for use as intercity diesel, electric, or battery multiple-unit trains.

18 thoughts on “Battery power a growing trend for manufacturers NEWSWIRE”