Responding to rumors of Metra takeover of UP routes, commuter CEO says discussions could lead to change in staffing, mechanical, some maintenance responsibilities 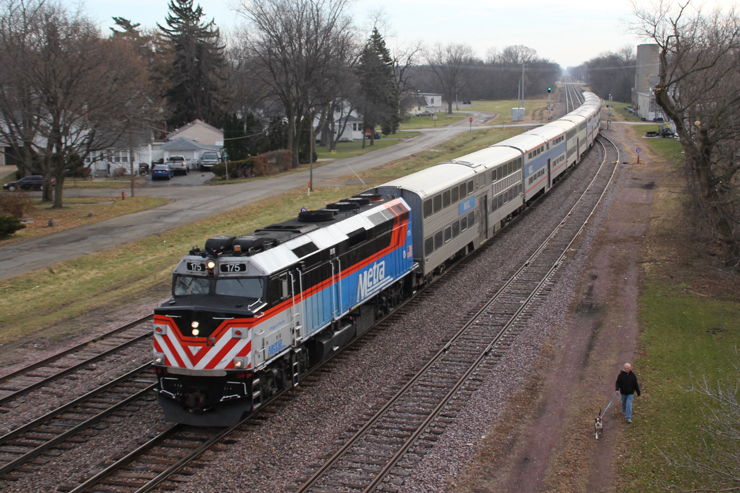 A Metra UP Northwest train arrives in Harvard, Ill., on Nov. 23, 2018. Metra and Union Pacific are in talks that could substantially change the nature of UP’s operating agreement with the commuter railroad.
TRAINS: David Lassen

CHICAGO — Union Pacific Railroad and Metra are in discussions that could give Metra some control of operations on the three UP lines that serve commuters, according to the commuter railroad.

Metra CEO/Executive Director Jim Derwinski said in a recent memo to employees that the discussions are part of ongoing negotiations with UP over a new purchase-of-service contract. The current contract expires Dec. 31.

“With this expiration, Union Pacific and Metra are exploring a change to future operations,” according to the memo, a copy of which was seen by Trains News Wire. “Concepts discussed include the potential transfer of mechanical, TE&Y [train, engine and yardman positions], clerk, ticket agent operations, and, possibly, some engineering work (i.e. station maintenance) to Metra.”

The memo added that “labor leaders will be engaged at the appropriate time” and that Metra would provide information to employees “when there is clear direction about potential changes.”

Derwinski acknowledges in the memo that there has been “talk going around of Metra taking over Union Pacific’s commuter operations.”

A Metra spokeswoman said the memo was necessary to “keep the rumor mill grounded in what was happening,” but that no other information was available due to the ongoing negotiations.

The memo said a “key goal of any changes made will focus on maintaining current service levels all of our passengers rely on and expect.”

Under the purchase-of-service agreement, UP owns and operates three of Metra’s 11 lines, the Union Pacific North to Waukegan, Ill, and Kenosha, Wis.; Union Pacific Northwest to Harvard and McHenry, Ill.; and Union Pacific West, to Elburn, Ill. The three lines, inherited when the Chicago & North Western became part of UP in 1995, provide 194 weekday trains and 103,000 daily passenger trips.

According to Metra, the UP uses its own employees and owns or control the rights-of-way and most other facilities required for operations. Metra owns the rolling stock and in conjunction with local municipalities is responsible for most stations. Metra retains overall authority over fares, service and staffing levels.

The UP lines produce about $130 million in revenue annually, or about 32% of Metra’s $407 million annual revenue. Operating expenses for the UP lines total nearly $230 million, according to Metra’s 2020 budget.

7 thoughts on “Metra, Union Pacific in talks that could change operating agreement NEWSWIRE”