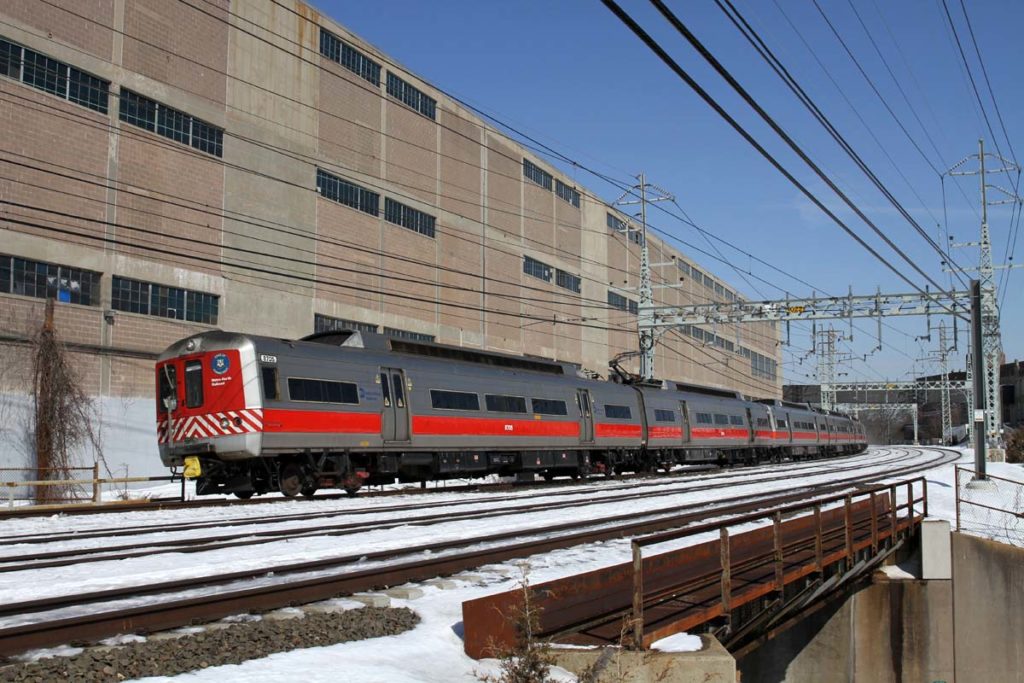 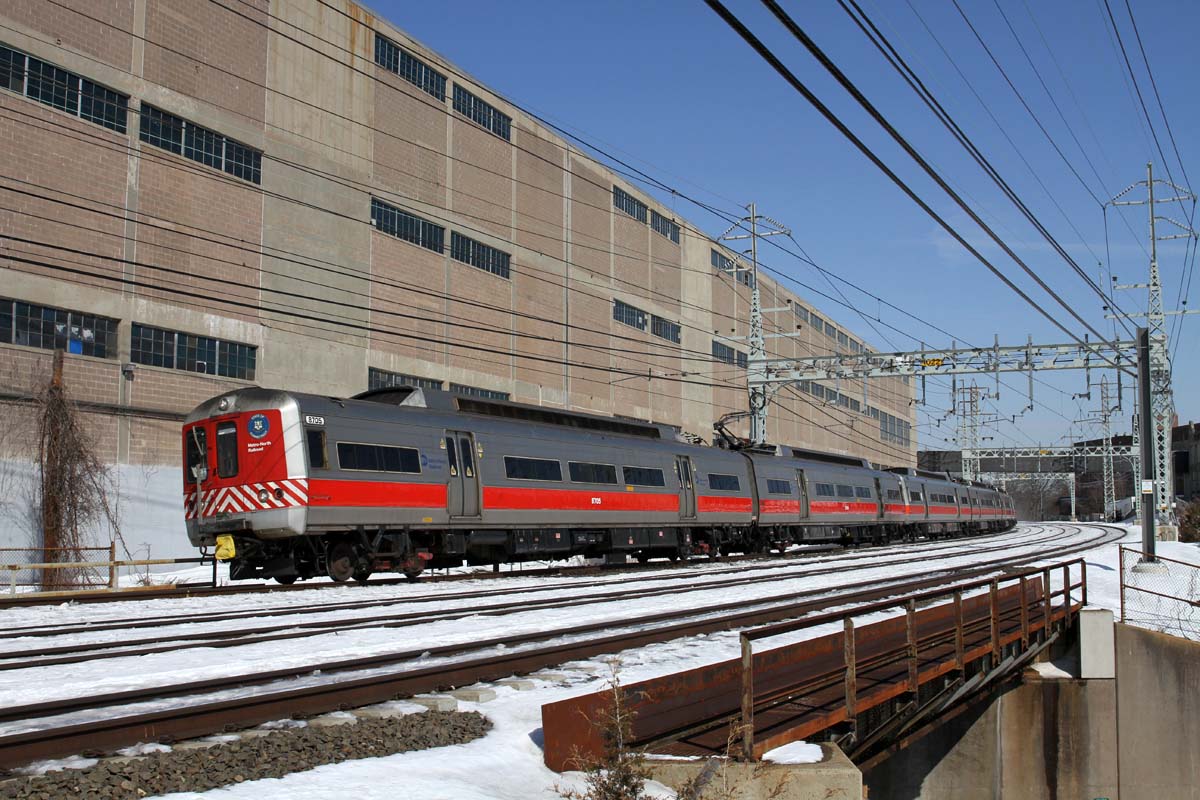 Connecticut Department of Transportation M2 No. 8705 leads a weekend Metro-North New Haven-Grand Central terminal train at West Haven, Conn., March 7, 2015. This M2 set would be one of the last of the fleet to operate until the end of 2018.
Scott A. Hartley
NEW HAVEN, Conn. – After more than 44 years of operation, the last of a onetime fleet of 244 MTA Metro-North Railroad Class M2 electric multiple unit cars have left the property. A diminishing number of the veteran General Electric cars had been retained as a reserve fleet since 2015 as Metro-North acquired what eventually will be a total of 471 Kawasaki M8 electric M.U. cars.

The Dec. 31, 2018 deadline for Positive Train Control finally caught up with the last operating M2s. None of the elderly cars had received positive train control equipment, and Metro-North retired the last of them at the end of the year. Still earning revenue right to the end, a train of six M2s made its last run on Dec. 28. Through spring 2019, those last M2s left New Haven and moved via Connecticut Southern and CSX Transportation freight trains. Carrying spray-painted “FICX” reporting marks (for Frontier Industrial Corp.), the cars were going to Ohio for scrapping.

The arrival of the first M2s, called “Cosmopolitan” cars upon delivery, in 1973 were a breath of fresh air for commuters on Penn Central’s 73-mile former New Haven Railroad route between New Haven and Grand Central Terminal in New York City, as well as the electrified branch between Stamford and New Canaan. The 100 Pullman-Standard M.U. cars built for the New Haven in 1954 had suffered from deferred maintenance by the bankrupt NH and successor Penn Central. Even older PC coaches, pulled by tired FL9 dual-mode units or EP-5 rectifier electrics, also covered many New Haven Line commuter services until the M2s took over.

By the time the M2s arrived, the states of Connecticut and New York had acquired control of their respective portions of the New Haven-GCT line. Public funds paid for the 244 new cars. Prior to the delivery of the first M2s, high-level station platforms required for the new cars were installed at all stops along the former New Haven main line from New Haven to Mount Vernon, N.Y.

Penn Central (and beginning in 1976, Conrail) continued to operate the well-patronized commuter trains. In 1983, the newly formed Metro-North, part of New York’s Metropolitan Transportation Authority, took over operations of all commuter services out of Grand Central to New York and Connecticut points. Connecticut contracts with MN to operate the trains in its state. 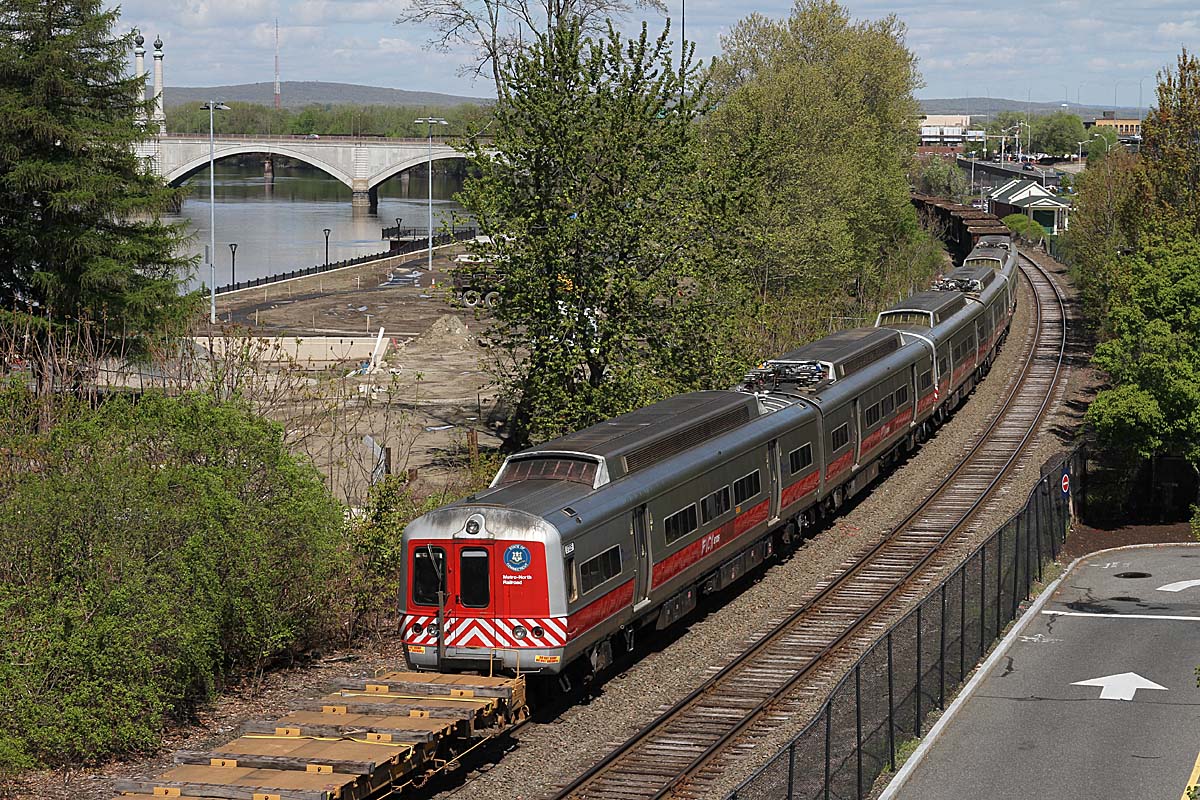 Three pairs of retired M2 cars, with CTDOT Nos. 8705 and 8704 trailing, are seen in a Connecticut Southern freight at Springfield, Mass., May 8, 2019, en route to Ohio for scrapping.
Scott A. Hartley
The M2s closely resembled earlier Budd “Metropolitan” M1 multiple unit equipment that had been purchased by New York’s MTA and assigned to Long Island Rail Road and Penn Central’s former New York Central lines. Like the M1s, the M2s were “married pairs,” with semi-permanently coupled cars sharing common mechanical and electrical equipment. An operator’s cab was at the outer end of each pair, and several pairs could be combined as a longer train. The M1s operated from third-rail 650-volt direct current power. The M2s used 11,000-volt A.C. from overhead catenary for most of their operation, but also were equipped with third-rail shoes to use the third-rail D.C. running into New York’s Grand Central Terminal. Some described the M2s as appearing to be large subway cars. Furthering that perception were the cars’ original twin headlights, mounted low on opposite sides of the nose. M2s took on a more conventional appearance in later years when a high-mounted headlight was added above the front door.

MTA and the State of Connecticut each purchased 122 of the M2s, and each agency’s cars carried their owner’s markings. The Penn Central M1s carried wide blue bands along their sides. The new M2s arrived with orange bands. The official reason for the new color seems forgotten more than four decades later. Some say it was simply to distinguish the New Haven cars from “Hudson” and “Harlem” trains, but others claim that managers chose the color to keep alive the memory of the old New Haven Railroad. Bands painted in a variety of oranges and reds carried over to later generations of M.U. cars, right up through today’s Kawasaki M8s.

Continuing ridership growth on the New Haven Line mandated additional equipment, and new cars followed the M2 design. Tokyu Car Co. built 54 M4 cars (in three-car sets) in 1987, and Morrison-Knudsen delivered 48 triplet M6 cars in 1994. The three types could operate with each other on trains. Over the years, all three M.U. types benefited from several major overhaul programs as they continued to provide most of the commuter services on the New Haven Line.

Metro-North and Connecticut DOT began the acquisition of the Kawasaki M8s in 2011, and as the new cars’ numbers increased, the M2s, M4s, and M6s began to be retired.

The newer Tokyu and Morrison-Knudsen cars all had been stricken from the roster by 2015. Two sets of M6s were donated for emergency services training in New York and Connecticut.

Even with the newer M4s and M6s gone, the pioneering M2s, which had carried generations of Connecticut and New York workers to and from their jobs, as well as millions of weekend visitors to “The City,” soldiered on. Earlier Metro-North stalwarts, such as the dual-mode FL9 locomotives and former NYC “ACMU” multiple unit cars were recognized on farewell excursions, but the M2s went out without fanfare. Fortunately, Connecticut Department of Transportation saw fit to donate a pair of M2s to the Danbury Railway Museum. The museum, located in the former New Haven freight yard in Danbury has acquired and preserved a growing number of pieces of rolling stock from Metro-North predecessor railroads, and the M2s fit nicely into the collection, according to museum president Stan Madyda. The pair are numbers 8606/8707, and were part of the final revenue train last December. Madyda says that the cars’ interiors are in very good condition, and they already are open for public viewing. More generations will be able to see the cars that had been a common sight on the New Haven Line for many years.