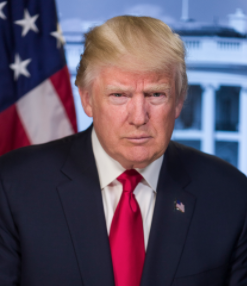 “Kansas City Southern is monitoring the situation and is not aware of any action at this time involving rail operations over the border,” spokeswoman C. Doniele Carlson says.

UP declined to comment, citing the quiet period prior to release of its first quarter earnings. BNSF did not immediately respond to an email seeking comment.

Independent rail analyst Anthony B. Hatch says the impact of closing the border would be unthinkable.

“Closing the border is very bad,” he says. “Even discussing it hurts investment.”

The border crossing at Laredo, Texas, is by far the busiest for railroads and truckers. Some 28 trains and 16,000 trucks cross the border there every day. Last year, Laredo captured 45 percent of U.S.-Mexico trade, according to the U.S. Bureau of Transportation Statistics.

“Closing the U.S.-Mexico border would inflict severe economic harm on American families, workers, farmers, and manufacturers across the United States,” says Neil Bradley, executive vice president and chief policy officer for the U.S. Chamber of Commerce. “U.S. trade with Mexico exceeds $1.7 billion daily, and nearly half a million people legally cross the southern border every day as workers, students, shoppers, and tourists. Even threatening to close the border to legitimate commerce and travel creates a degree of economic uncertainty that risks compromising the very gains in growth and productivity that policies of the Trump Administration have helped achieve.”

Automakers across North America have built their supply chains around the free flow of parts across the American, Mexican, and Canadian borders.

“You can’t sell cars with missing pieces,” Kristin Dziczek, a vice president at the Center for Automotive Research, told CNN. “You’ve got to have them all. I see the whole industry shutdown within a week of a border closing.”

Auto plant and part-supplier shutdowns would ripple across the economy and put a dent in rail traffic.

The president has proposed shutting down the border as early as this week as a way to curtail the number of migrants seeking to enter the country via Mexico.