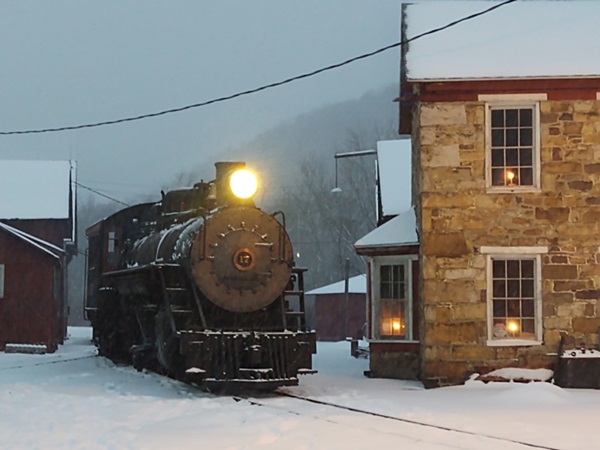 ROCKHILL FURNACE, Pa. — Thursday, Dec. 17, saw a one-day-only mini-revival of the East Broad Top Railroad’s “Winter Spectacular,” a popular feature held each February from 1966 through 1981. The historic narrow gauge railroad usually steamed up three or four of the railroad’s six Baldwin 2-8-2 steam engines for those events.

A sudden 12-inch snowfall in the region this week prompted managers of EBT Foundation, Inc., to use the weather to their advantage by announcing on short notice a free snow photo shoot for anyone who could make it to EBT’s Rockhill Furnace yard and headquarters. The day’s activities consisted of posing 2-8-2 No. 17 (built 1918) with a freight consist in the yard, ferrying photographers to a location on the main line for more scenes with No. 17 and train, and finally, a series of diesel-powered caboose hops over the 2.5-mile portion of line that the Foundation has restored since buying the property from the Kovalchick family last February. Of the possibility of a formal revival of the Spectaculars, General Manager Brad Esposito said, “Everything we’ve done so far points to the future. This is a precursor of things to come.”