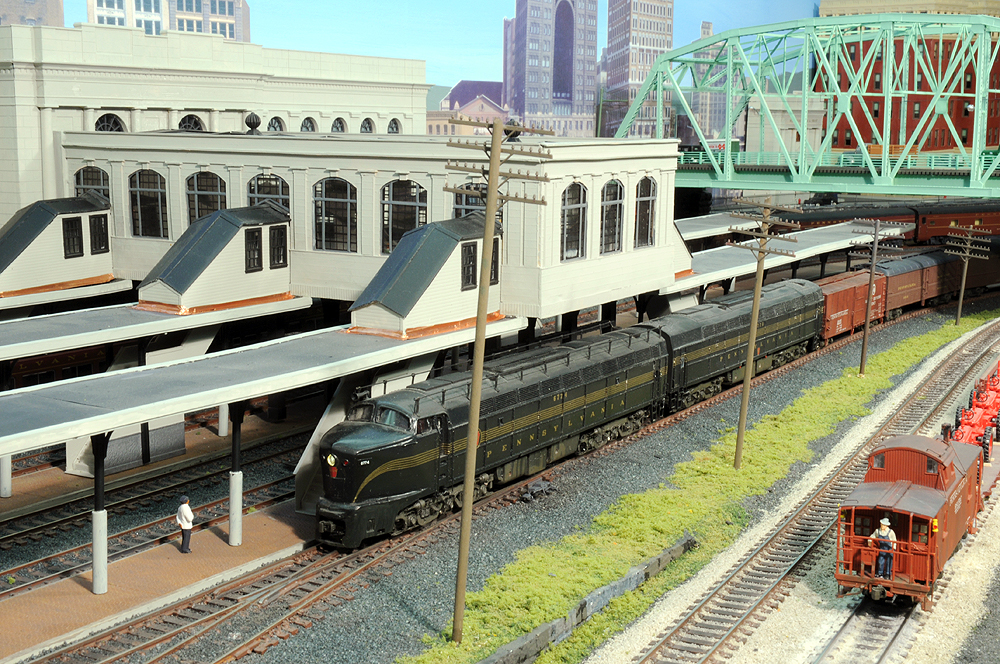 Jimmy Deignan added an eastern seaport, called Middleport, at the end of the new peninsula. Here, a switcher picks up a gondola in front of Middleport Station. The lighthouse is a Crow River Products kit built by Steve Cryan. Lou Sassi photograph

An SW7 heads toward the wharf in Middleport with a trainload of merchandise. Located on the new peninsula, this densely packed waterfront scene shows Jimmy Deignan’s fondness for craftsman structures. Lou Sassi photograph

It’s 1947 and Pennsy’s flagship Broadway Limited races through Johnsville, Pa., behind a 4-4-4-4 Class T1 Duplex. The T1 is from Broadway Limited Imports, the diner was built from a City Classics kit, and the gates are by N.J. International. Lou Sassi photograph

This long view of the railroad looks east down Sinnemahoning Creek. In the foreground, an eastbound steam-powered freight holds on the secondary while a diesel-led westbound from Renovo approaches Driftwood. Paul J. Dolkos photograph

A westbound freight passes under the siding bridge that leads to the Essex No. 2 coal breaker along the backdrop. The scratchbuilt houses in this scene are all based on prototype photos. Paul J. Dolkos photograph

The Low Grade Secondary features a small yard for additional switching opportunities. John enjoys adding details to a scene, such as the PRR less-than-carload-lot (LCL) container used for storage next to the yard office. Paul J. Dolkos photograph

Each railroad includes scenes that modelers might find in Pennsylvania in summer and early autumn.