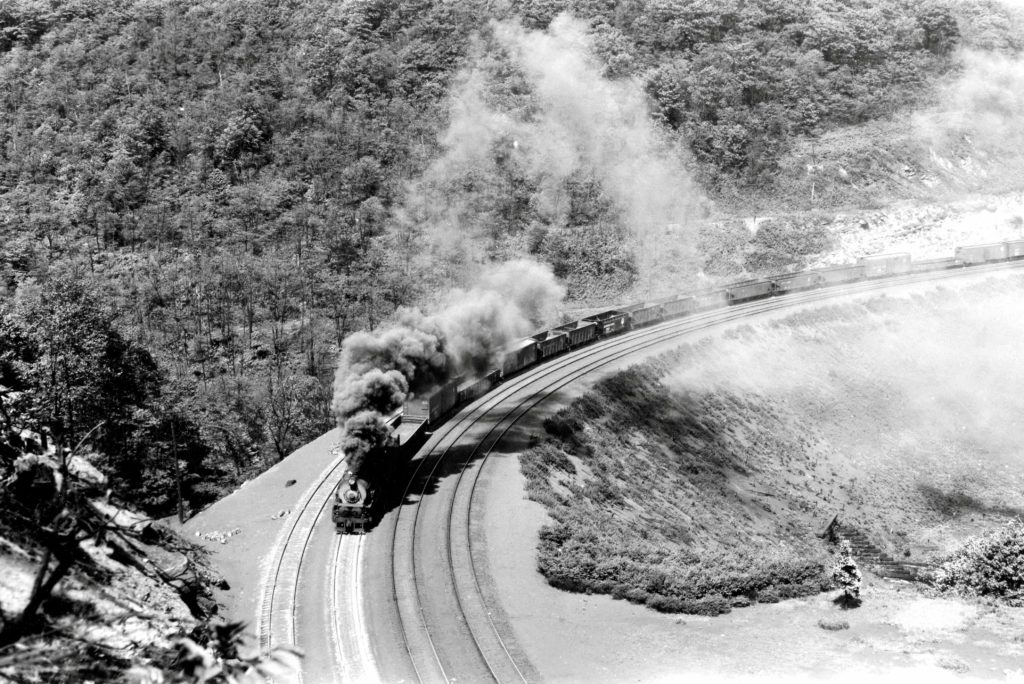 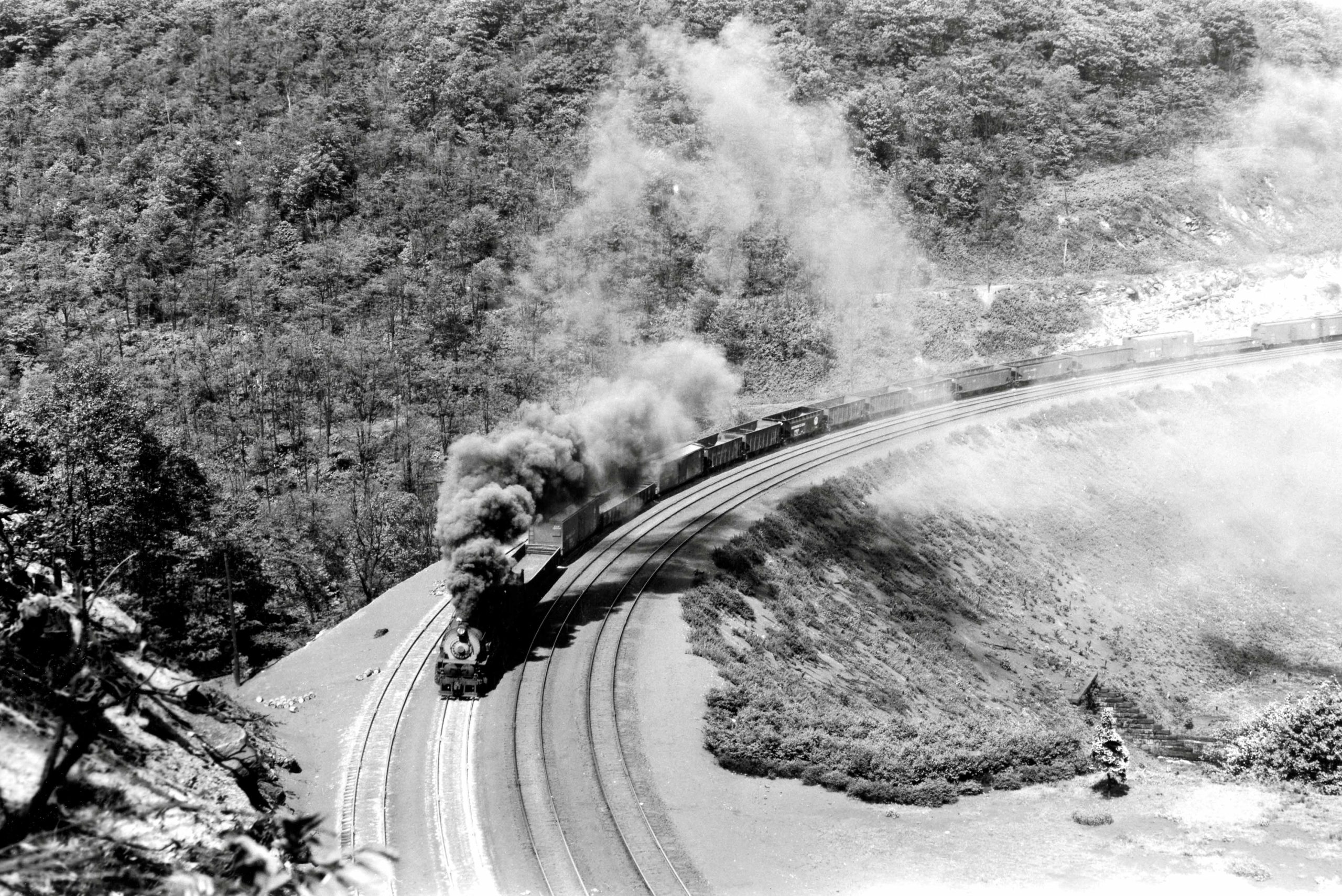 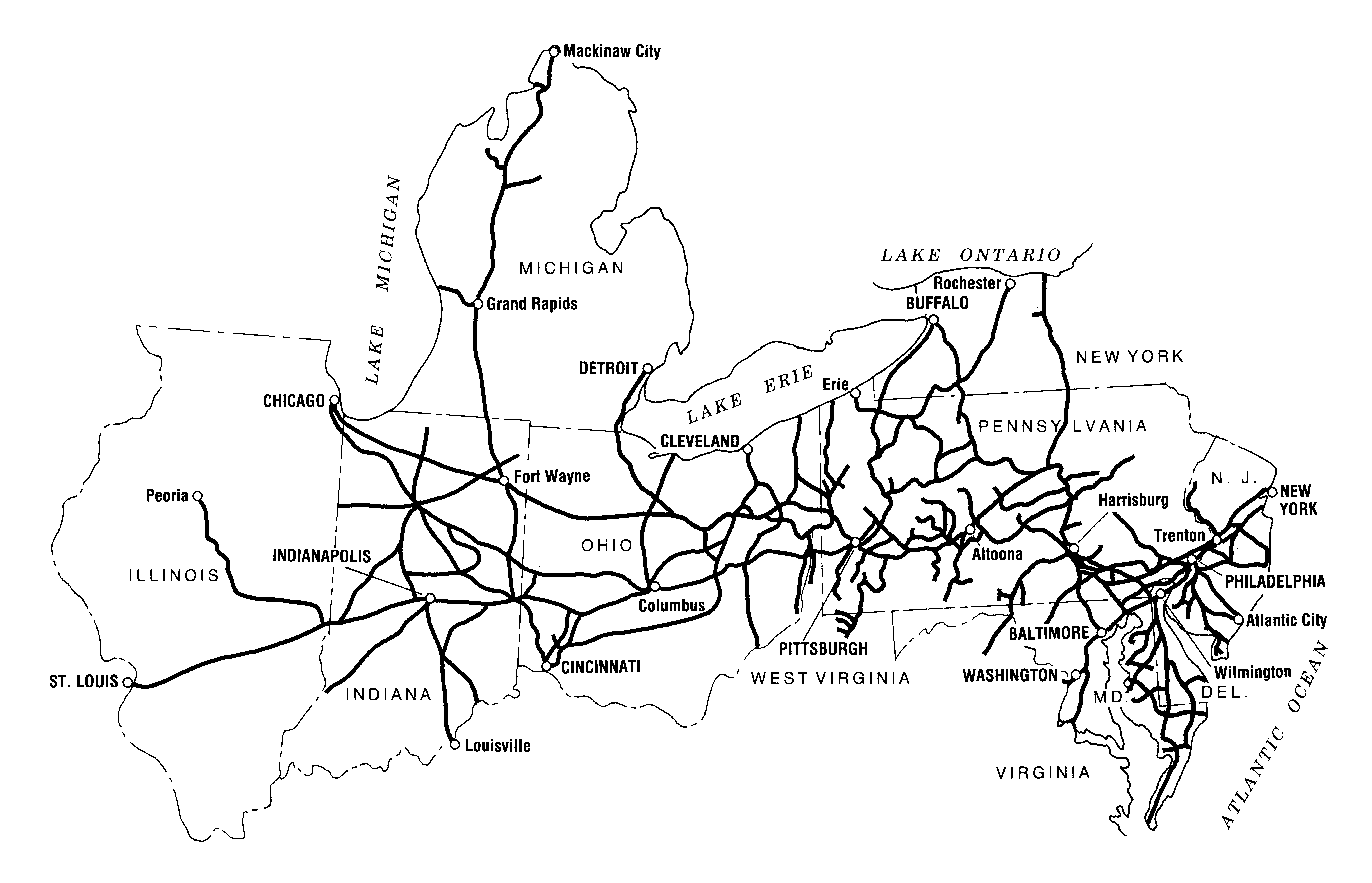 History and major events of the Pennsylvania Railroad

The original Pennsylvania Railroad ran from Philadelphia to Pittsburgh. Much of its subsequent expansion was accomplished by leasing or purchasing other railroads.

Construction began in 1847. Two years later the Pennsy made an operating contract with the Harrisburg, Portsmouth, Mountjoy & Lancaster, and by late 1852 rails ran from Philadelphia to Pittsburgh via a connection with the Portage Railroad between Hollidaysburg and Johnstown, Pa. The summit tunnel was opened in 1854, bypassing the inclined planes and creating a continuous railroad from Harrisburg to Pittsburgh.

In 1857 PRR bought the Main Line of Public Works and in 1861 leased the Harrisburg, Portsmouth, Mountjoy & Lancaster, putting the entire Philadelphia to Pittsburgh line under one management.

PRR also acquired interests in two major railroads, the Cumberland Valley and the Northern Central. The Cumberland Valley was opened in 1837 from Harrisburg to Chambersburg, and it was extended by another company in 1841 to Hagerstown, Maryland. The Baltimore & Susquehanna was incorporated in 1828 to build north from Baltimore. Progress was slowed because of the reluctance of Pennsylvania state officials to charter a railroad that would carry commerce to Baltimore. The line reached Harrisburg in 1851 and Sunbury in 1858. By then the railroad companies that formed the route had been consolidated as the Northern Central Railway. Pennsy acquired majority ownership of the Northern Central in 1900.

The Pennsy expanded into northwestern Pennsylvania by acquiring an interest in the Philadelphia & Erie Railroad in 1862 and assisting that road to complete its line from Sunbury to the city of Erie in 1864. The line to Erie was not particularly successful, but from Sunbury to Driftwood it could serve as part of a freight route with easy grades. The rest of that route was the Allegheny Valley Railroad, conceived as a feeder from Pittsburgh to the New York Central and Erie railroads. The Pennsylvania obtained control in 1868, and in 1874 opened a route with easy grades from Harrisburg to Pittsburgh via the valleys of the Susquehanna and Allegheny rivers. PRR leased the Allegheny Valley Railroad in 1900.

Pittsburgh, Fort Wayne & Chicago
By 1847 the Pennsylvania’s directors were looking west into Ohio. In 1851 they discussed assisting the Ohio & Pennsylvania Railroad, which by then was open from a point across the Allegheny River from Pittsburgh to Salem, Ohio. Projected west from the end of the O&P at Crestline, Ohio, was the Ohio & Indiana, which was building a line to Fort Wayne, Indiana, with extensions to Iowa and, almost incidentally, Chicago.

In 1869 the Pennsy leased the Fort Wayne. The lease included the Grand Rapids & Indiana, a line from Richmond, Indiana, north through Fort Wayne and Grand Rapids, Michigan. In 1873 the Pennsylvania assembled a route into Toledo, Ohio; about 50 years later it extended the line to Detroit, mostly on trackage rights.

Pittsburgh, Cincinnati, Chicago & St. Louis
West of Pittsburgh lay a string of railroads that formed a route through Columbus to Cincinnati. The Pittsburgh & Steubenville was the last to be opened because the state of Virginia, which held a large interest in the B&O, refused to permit a railroad to be built across its narrow strip of territory (now the panhandle of West Virginia) between Pennsylvania and the Ohio River. The Pittsburgh & Steubenville was sold at foreclosure and a new company, the Panhandle Railway, took over in January 1868. In May of that year the Pennsylvania consolidated the Panhandle and another road as the Pittsburg, Cincinnati & St. Louis Railway, but the nickname “Panhandle” stuck with it and its successors.

West of Columbus, Ohio, the Columbus, Chicago & Indiana Central Railway had a line from Columbus to Indianapolis and another from Columbus through Logansport, Indiana, to Chicago. The Pennsy leased the CC&IC in 1869.

Several lines were consolidated in 1916 as the Pittsburgh, Cincinnati, Chicago & St. Louis Railroad. At the beginning of 1921 the PCC&StL was leased to the Pennsylvania Railroad. 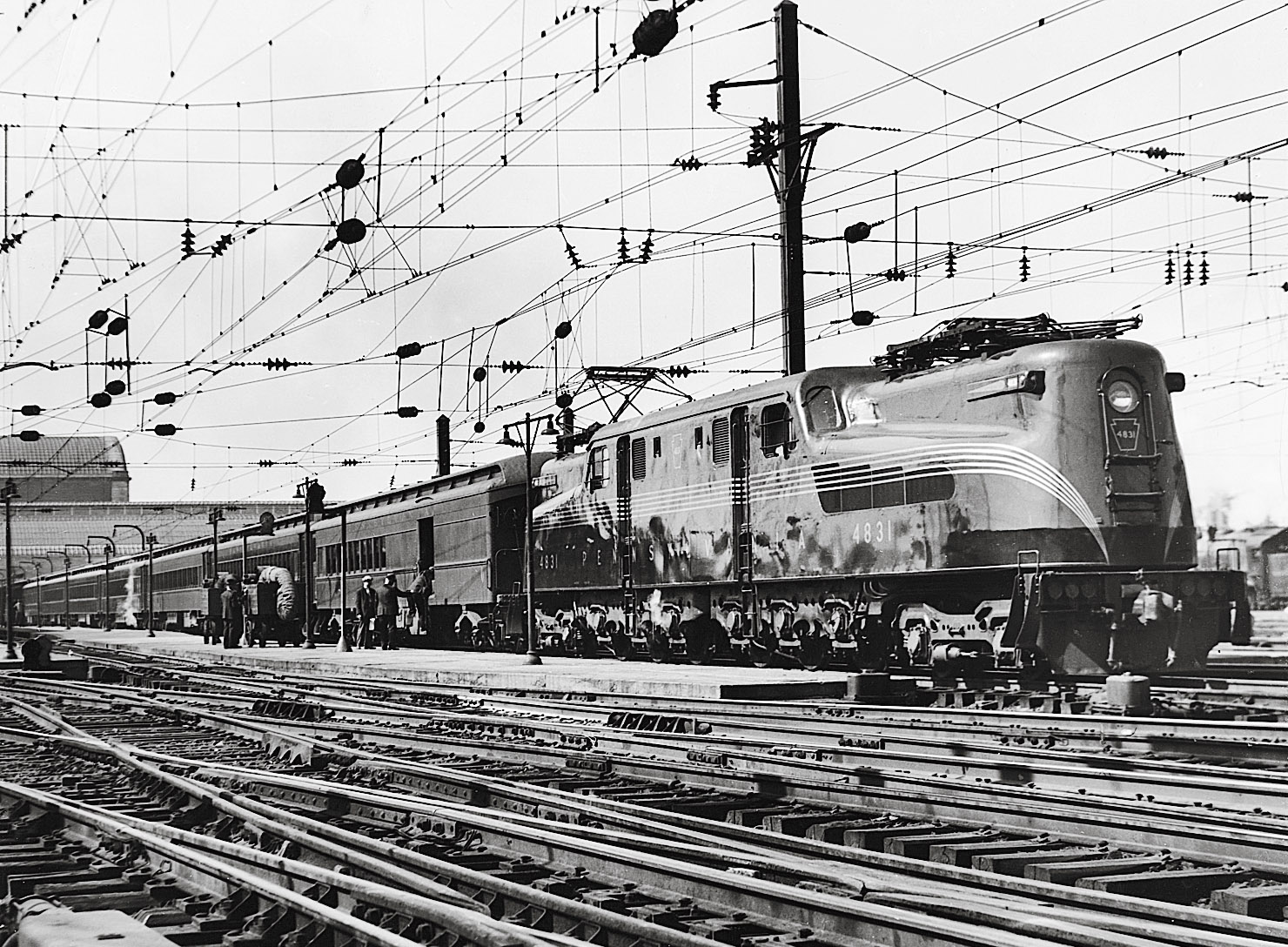 Locomotive 4831, one of the Pennsylvania Railroad’s fleet of 139 GG1 electrics introduced in 1934, stands at Washington Union Station, ready to depart with a passenger train for New York in about 1940.
H. W. Pontin

PRR lines east of Philadelphia
Even with the loyalty to Philadelphia engendered by having its roots and headquarters there, the Pennsy could not ignore New York. In 1863 the PRR contracted with the Philadelphia & Trenton (opened in 1834), the Camden & Amboy (with lines in New Jersey from Camden to South Amboy and from Trenton to New Brunswick), and the Delaware & Raritan Canal Co. In 1871 it leased the properties of these companies and the United Canal & Railroad Companies of New Jersey, acquiring lines northeast to Jersey City, south to Cape May, and north along the Delaware River to Belvidere. In the 1880s PRR constructed lines up the Schuylkill Valley into Reading territory and acquired lines from Philadelphia east across New Jersey to the shore. The latter were combined in 1933 with parallel lines owned by the Reading to form the Pennsylvania-Reading Seashore Lines.

PRR began construction in 1904 of Pennsylvania Station, between Seventh and Eighth avenues and 31st and 33rd streets in Manhattan; two tunnels under the Hudson River; four under the East River; and a double-track line across the Jersey Meadows to connect it to the main line east of Newark — all electrified. The new station opened in 1910.

In 1917 the New York Connecting Railroad, including the Hell Gate Bridge, was opened, creating a rail route from Bay Ridge in Brooklyn for freight service and from Penn Station for passenger service to a junction with the New Haven in the Bronx.

PRR lines south of Philadelphia
The Pennsy bought the charter of the Baltimore & Potomac to make a connection into Washington. The B&P was to have built a railroad from Baltimore straight south to the Potomac River at Popes Creek, Maryland, but it had lain dormant since its chartering in 1853. B&P’s charter allowed it to build branch lines no more than 20 miles long, and the PRR saw that a 16-mile branch from Bowie could reach Washington nicely. The resulting Baltimore–Washington route opened in 1872. Congress authorized the Pennsylvania to continue its line through Washington and across the Potomac to connect with railroads in Virginia.

The Philadelphia, Wilmington & Baltimore opened in 1838 between the cities of its name. The Pennsy was quick to connect it to the B&P in Baltimore, and in 1873 through service was inaugurated between Jersey City and Washington. Both Pennsy and B&O saw the strategic importance of the PW&B, which included lines down the Delmarva Peninsula — PRR got it in 1881. PRR soon extended the Delmarva lines southward by construction of the New York, Philadelphia & Norfolk Railroad to Cape Charles, Virginia, where they connected with a ferry to Norfolk, Virginia.

In 1902 the PW&B and the B&P were consolidated as the Philadelphia, Baltimore & Washington Railroad. PB&W and B&O teamed up to form the Washington Terminal Co., which constructed a new Union Station in Washington, opened in 1907. In 1917 the Pennsylvania Railroad leased the PB&W. 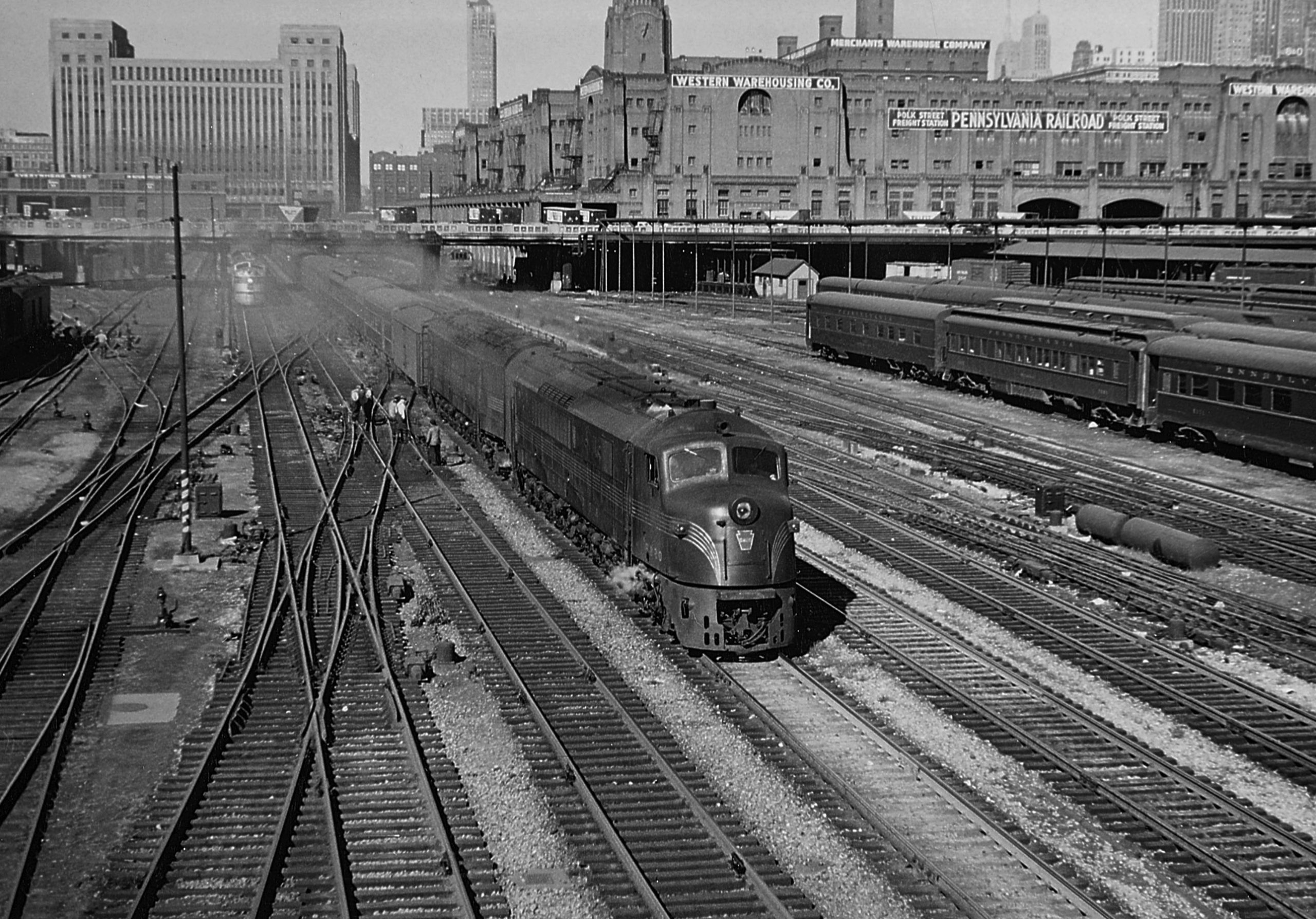 The Pennsylvania was, by its own declaration, “The Standard Railroad of the World.” The standardization was internal. Passenger trains moved behind a fleet of 425 K4s-class Pacifics. The road had hundreds of P70-class coaches built to a single design. Freight was hauled by 574 L1s-class Mikados (which used the same boiler as the K4s) and 598 I1s-class Decapods; PRR had thousands of X29-class 40-foot steel boxcars. Much of Pennsy’s standardization was different from nearly everything else in North America: Belpaire boilers on steam locomotives; position-light signals giving their indications with rows of amber lights at different angles; Tuscan red passenger cars instead of dark green.

Around 1900 under the leadership of Alexander Johnston Cassatt, PRR purchased substantial interests in Norfolk & Western, Chesapeake & Ohio, Baltimore & Ohio, and (through B&O) Reading. Cassatt was in favor of an industry-wide end to rebating (the returning a portion of the freight charge to favored shippers). Strong railroads would be able to resist pressure to grant rebates, but weaker ones would not — unless they were controlled by strong railroads. In 1906 PRR sold its B&O and C&O interests but increased its N&W holdings.

At the same time the road opened two new stations in Philadelphia, Suburban Station next to Broad Street Station in the city center and 30th Street, on the west bank of the Schuylkill River, as the first steps in the elimination of Broad Street Station and the elevated tracks leading to it. Two years later the electrification was extended from Wilmington through Baltimore and Washington to Potomac Yard in Alexandria, Virginia. Wires were extended west from Paoli to Harrisburg in 1938.

During World War II Pennsy’s freight traffic doubled and passenger traffic quadrupled, much of it on the eastern portion of the system. The electrification was of inestimable value in keeping the traffic moving. After the war Pennsy had the same experiences as many other railroads but seemed slower to react. PRR was slower to dieselize, and when it did so it bought units from every manufacturer.

As freight and passenger traffic moved to the highways, Pennsy found itself with far more fixed plant than the traffic warranted or could support, and it was slow to take up excess trackage or replace double track with Centralized Traffic Control.

PRR was saddled with a heavy passenger business. It had extensive commuter services centered on New York, Philadelphia, and Pittsburgh and lesser ones at Chicago, Washington, Baltimore, and Camden, New Jersey. It had gone through the Depression without going bankrupt.

Pennsylvania and New York Central surprised the railroad industry by announcing merger plans in 1957. The two had long been rivals, and the merger would be one of parallel roads rather than end-to-end. The merger took place on February 1, 1968 — and Penn Central fell apart faster than it went together.