Micro-Trains’ Z scale EMD SD40-2 diesel locomotive
This SD40-2 from Micro-Trains Line Co. has an impressive amount of accurate detail, especially considering that it’s a 1:220-proportion model. This diminutive diesel also has one of the quietest, smoothest running mechanisms of any locomotive that I’ve encountered in any scale.

Prototype. General Motors Electro-Motive Division built the SD40-2 between 1972 and 1986. The locomotive featured a 3,000-hp turbocharged diesel engine and EMD’s high-adhesion HT-C trucks. The SD40-2 proved to be EMD’s all-time best-selling locomotive, with 3,945 units delivered to railroads in the United States, Canada, and Mexico. Many SD40-2s are still in service today. 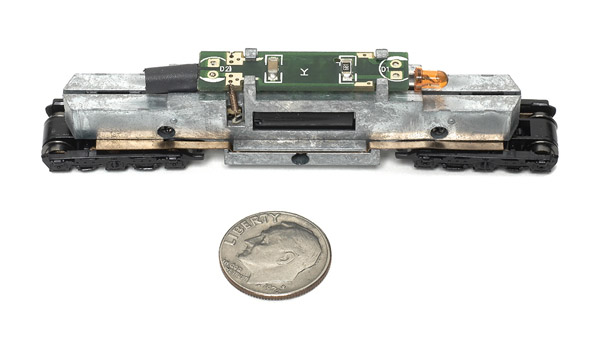 The model features an extremely smooth and quiet mechanism. The split die-cast metal frame measures 31/2″ long.
Appearance. Most of the molded detail on the model is sharply defined and matches prototype drawings and photos. The rooftop radiator and dynamic brake fans are especially well done. The model is missing the nose-mounted headlight and ditch lights found on the prototype CSX no. 8014.

Factory installed separate parts include the air horns, antenna, and handrails. The handrails are flexible acetal plastic and measure scale 2.5″ in diameter.

The paint scheme on our model is well done with sharp definition between the colors. All the lettering is straight, and the SD40-2 model designation under the road number is legible under magnification.

Our review sample depicts CSX no. 8014 in her post-2006 livery. The Z scale model’s paint scheme matches prototype photos, except that on the prototype the steps leading to the front cab doors have yellow edges. The plastic parts on the body shell are all press-fit. 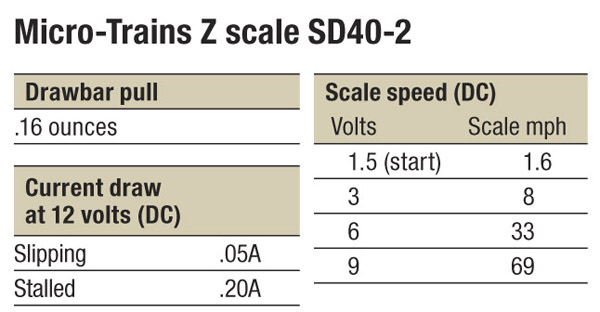 Smooth performance. After removing the couplers and fuel tank, I lifted off the body shell. The model’s 9-volt motor and flywheels are encased in a split die-cast metal frame. The printed circuit board is mounted on top of the frame and measures .3″ x 1.25″. There are two LEDs at each end.

If you’re interested in adding Digital Command Control, a Train Control Systems MZA-4 DCC decoder fits this model. For more information, visit the TCS Web site at www.tcsdcc.com.
The Z scale diesel tracked well on our test track, although the metal wheels aren’t RP-25 contour. The flange depth and tread width are .010″ too deep and wide according to National Model Railroad Association standard S-4.2. The two center wheels of each truck are blind (without flanges) to help the locomotive negotiate tight curves.

The model’s mechanism is extremely smooth and quiet. At 1.5 volts, the SD40-2’s headlight came on and the model crept along a 1.6 scale mph. At 9 volts, the model reached a top speed of 69 scale mph, which is close to that of one of the gear ratios available on the EMD prototype. The manufacturer warns not to run the locomotive on more than 9 volts or the motor could be damaged.

Using a digital force meter, I measured the model’s drawbar pull at .16 ounce. We haven’t yet established a standard drawbar pull measurement for Z scale locomotives. Given the light weight of Z scale rolling stock, the Micro-Trains SD40-2 should be able to haul a train of credible length.