Read this review from Model Railroader

A long pedigree. Though some rigid-frame locomotives with a 2-6-0 wheel arrangement were seen as early as 1852, the first true Moguls with pivoting lead trucks were built in 1866. The Mogul was designed as a general purpose engine, though its low drivers (56″ on early versions, 64″ later) and low top speed suited it better for hauling freight trains than for passenger duties.

Though it filled the same niche as the heftier 2-8-0 Consolidation, which was also developed in 1866, Moguls were nonetheless popular, perhaps in part due to their ease of maintenance. About 8,000 were built. Despite the development of larger and faster steam locomotives in ensuing years, Moguls were still being ordered by Class 1 railroads as late as 1924. Some railroads kept these plucky little engines on yard, industry, and light branchline duty until the end of steam.

Bachmann’s model is based on a prototype built by Alco for the Green Bay & Western in 1924. The Alco locomotive has a domed smokebox door, a tender with raised fuel bunker and Andrews trucks, a spoked “boiler tube” pilot, a slightly flared smokestack, and a single cross-compound air compressor mounted on the left side of the boiler. 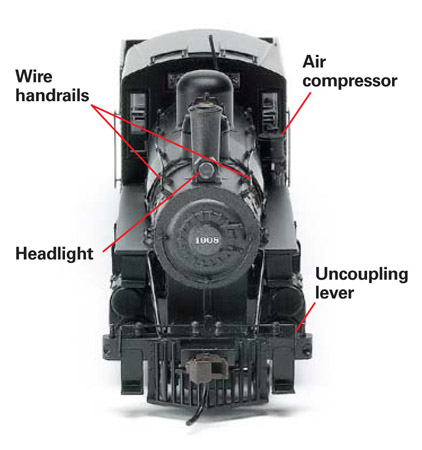 The model features wire grab irons and handrails, wire uncoupling levers, and working blackened metal valve gear.
A handsome model. Though most steam engines being built in 1924 had heftier boilers and fireboxes for more power, the GB&W locomotive had an elegantly slim boiler. Drawings of this engine were published in the Model Railroader Cyclopedia: Vol. 1, Steam Locomotives (Kalmbach Publishing Co.). All the dimensions and details I checked matched those on the drawing, including the wheel diameters.

The model is offered in six road names. One of them isn’t the GB&W, which actually owned the prototype. Our sample was lettered for the New York Central. Locomotive no. 1908 was a NYC 2-6-0, but she was built in 1899 by Schenectady Locomotive Works, a predecessor of Alco. Even so, the model’s­ slim boiler, spoked pilot wheels, and Walschaerts valve gear makes it a passable stand-in for this earlier locomotive. Not so for the Pennsylvania RR version; the Pennsy never owned a 2-6-0 numbered 3236, and most PRR Moguls­ had distinctive Belpaire fireboxes, absent on this model. 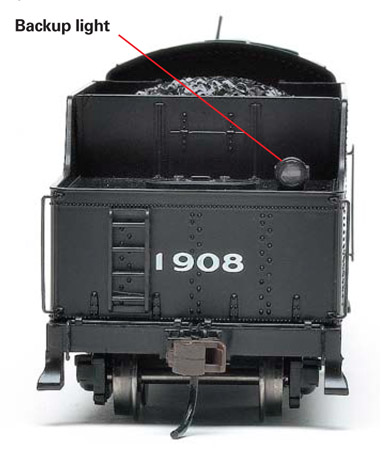 The black paint is smooth and even. The white lettering on the cab and tender is crisp, straight, and opaque. The Alco builder’s plate on the smokebox is legible under magnification, as is the tiny locomotive number on the side of the headlight case.

The locomotive is equipped with plastic E-Z Mate Mark II magnetic knuckle couplers, which are mounted at the correct height. The blackened metal wheels are in gauge. The six drivers and all eight tender wheels pick up electricity. Part of the copper wipers stuck out slightly from behind the drivers on our sample; they should be easy to bend back into place. 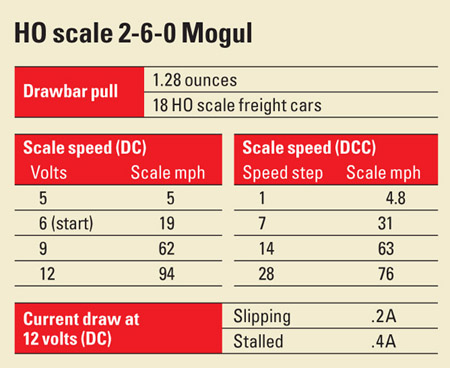 Performance. The SoundTraxx Sound Value decoder in our locomotive is dual-mode, meaning the engine will run and make appropriate sounds when running on either direct current or DCC layouts. I tested it under DC first, using a Model Rectifier Corp. Tech 4 power pack.

As I increased the voltage to just over 5V, the lights blinked and the decoder began to make a sound reminiscent of a ticking clock. At 6V sound effects started and the engine zipped along at more than 19 scale mph. I could decrease the voltage after that point to slow the locomotive down to about 5 scale mph, but I couldn’t make it start at that speed. This would make slow-speed switching tricky.

Low speed performance in DC can be improved by programming configuration variables (CVs), but this requires a DCC system. A list of the decoder’s CVs is on the SoundTraxx website. I used our NCE Corp. PowerCab DCC system to increase the value of CV63, the Analog Mode Motor Start Voltage, from its default value of 20 to 48. At 5.5V the engine started to roll at 3.7 scale mph. (The figures in the table to the right are before reprogramming CV63.) I also easily programmed the locomotive’s long ­address to the cab number, 1908.

The engine’s performance under DCC was stellar. Air compressor sounds started upon applying track power. At speed step 1, the locomotive rolled steadily at just under 5 scale mph. At speed step 28, the engine reached a scale speed of almost 76 mph, about the same as the prototype’s rated top speed. Its performance when set to 128 speed steps was even smoother, chuffing along at only 1.6 scale mph at speed step 1.

For such a small engine, the Mogul mustered a respectable drawbar pull. The model can pull the equivalent to 18 HO freight cars or six HO passenger cars on straight and level track.

Sound effects. The Sound Value decoder doesn’t feature as many CVs as a full Tsunami. Most of the CVs omitted involve advanced sound features, such as the equalizer and reverb effects.

The Sound Value decoder features most of the user-triggered sound effects as the full Tsunami. F1 triggers a realistic sounding bell, F2 starts and stops a continuous steam whistle, and F3 gives a short toot. F4 toggles a steam blowdown sound. F7 dims the lights, while F8 mutes the sounds (useful for when the locomotive is parked at the roundhouse).

In both DC and DCC, there are four exhaust “chuffs” per wheel revolution. Like other SoundTraxx decoders, these effects can be fine-tuned to be in better synch with the wheel revolution at specific speed ranges.

These user-triggered sounds, as well as the engine chuffs and air compressor, were clear, robust, and realistic. The speaker, pointing downward in the tender, was free of buzzes or rattles.

A welcome arrival. Modelers of the mid-steam era have been waiting a long time for a high-quality, economical, sound decoder-equipped HO scale steam engine like this one. Here’s to hoping Bachmann offers it in more road names. I also look forward to the next steam locomotive in Bachmann’s Sound Value line. How about a Consolidation?