Athearn N scale Big Boy
One of the largest locomotives ever built is available as a sound-equipped N scale model. The accurately detailed Athearn Big Boy 4-8-8-4 also has power worthy of its prototype. The N scale locomotive’s drawbar pull is almost double that of the average N scale steamer. Equipped with a Model Rectifier Corp. (MRC) dual-mode Digital Command Control (DCC) sound decoder, the Athearn N scale Big Boy brings user-controlled sound effects to both DCC and DC layouts.
Prototype. The Union Pacific RR and the American Locomotive Co. developed the 4-8-8-4 simple-expansion locomotive to deal with the steady grades on UP’s line between Ogden and Wasatch, Utah. The railroad wanted a locomotive that could haul trains upgrade without a helper, yet still be fast enough keep up with traffic flow. Alco delivered the first 20 of these massive steamers, nos. 4000 to 4019, to the UP in September 1941.

The UP received five more Big Boys, nos. 4020 to 4024, in 1944 to help deal with increased traffic during World War II. These locomotives were nearly identical to the 1941 engines, but they were heavier because of wartime restrictions on certain lightweight metal alloys, and instead of the earlier aftercooler pipes along the pilot steps, they came equipped with Wilson radiators. Most of the earlier Big Boys were eventually converted to this equipment.

Although built late in the steam era, most of these successful locomotives each logged a million miles or more during their careers. The Big Boys made their final regular runs in 1959. 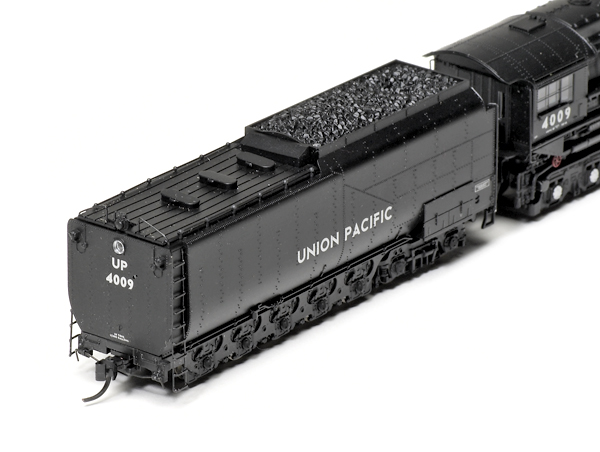 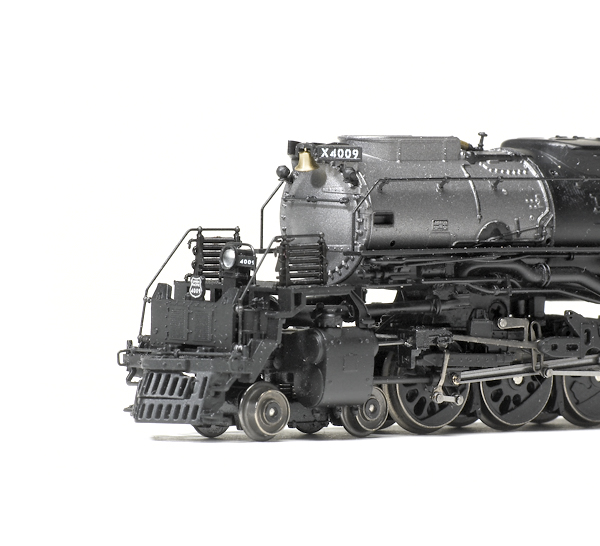 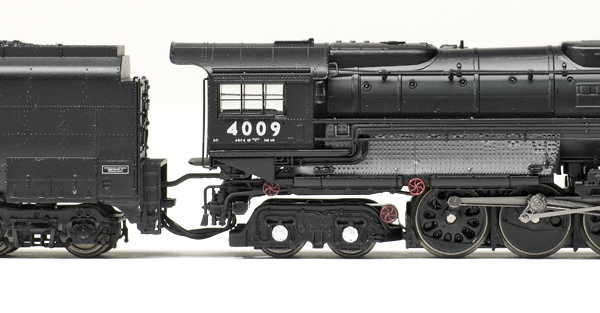 Our sample came decorated as no. 4009. The aluminum-colored lettering is crisp and straight.

The overall detail level on this N scale Big Boy is not that far removed from the Athearn HO scale Big Boy. The N scale model’s molded-in detail is sharply defined. The boiler handrails and almost all piping are separately applied.

Correct for the first 20 Big Boys as-built, our sample has aftercooler piping under the pilot handrails.

Unfortunately, like the Challenger, the Athearn Big Boy has a black Phillips head screw inside the front smokestack. It would have been less noticeable if the screwhead was painted graphite to match the smokestack.

Drivetrain and electronics. A can motor with two metal flywheels inside the boiler drives both the front and rear engines through separate worm gears and gearboxes. The rear drivers of the rear engine and the front drivers of the front engine come with rubber traction tires and contribute to the Big Boy’s impressive 2.9 ounce drawbar pull, equivalent to 73 N scale freight cars on straight and level track.

On the prototype locomotive, only the front engine is articulated. On the Athearn Big Boy, the rear engine also swivels. This, along with .05″ of lateral motion in the wheelsets of the centipede tender’s pedestal truck, allow the model to negotiate tight-radius curves.

I ran the model around an 11″- radius oval of Kato Unitrack and through an Atlas code 55 161/4″-radius curve and no. 6 turnout without interruption of sound. The Big Boy looks better rounding 20″ radius or greater curves.

Most of the model’s electronics are inside the tender. A drawbar and wires permanently connect the engine and tender. Although exploded-view diagrams are included, disassembly of the model isn’t recommended.

Speed control. In DC the sounds and lights started at 3 volts. At 8 volts the model crawled at 2.8 scale mph. The Big Boy reached a top speed of 67 scale mph at 12 volts.

I measured the locomotive’s speed in DC using an MRC Tech 4 power pack. Using the included six-button remote controller provides smoother speed control in DC. First I set the power pack to 12 volts, then I adjusted the model’s speed and direction with the controller.

In DCC the Athearn Big Boy performed best when I used a 12-volt power supply. Under 128 speed steps the model moved steadily at 3 scale mph and accelerated smoothly to a top speed of 68 scale mph.

Since most DCC systems deliver 14 to 18 volts to the track, I also tested the model with our shop’s 16-volt power supply. At this voltage, the transitions between the speed steps was more abrupt, and the model had a faster starting speed. If you have a higher voltage DCC system, I’d recommend using an MRC Universal Voltage Reducer.

Dual-mode sounds. The MRC sound system in the Big Boy is comparable to the one in Athearn’s N scale Challenger. The overall sound quality is good. The speaker in the tender is well-enclosed, so there aren’t any buzzes or rattles.

The engine produces four chuffs per wheel revolution, synchronized to each engine.

The default whistle is the correct steamboat type, but I found this feature to be the weakest of all the sound effects. The whistle has an artificial-sounding echo effect.

With the six-button remote controller I triggered the bell and whistle and programmed some sound effects in DC, including changing the whistle type.

When using DCC, the sound system supports 28 functions. Most of the electronic features are programmable. The instruction manual includes a configuration variable (CV) table.

Using an MRC Prodigy Advance system, I changed the locomotive’s long address to its road number, adjusted acceleration and deceleration, and adjusted the bell volume. I then programmed CV125 with a value of 0 to set all the CV’s back to their factory defaults.

User-controllable sound and powerful pulling capabilities make this new N scale locomotive fun to operate. If you’re an N scaler who has a layout with broad curves and you’re a fan of big UP steam, you should make room in your roundhouse for the new Athearn Big Boy.