Reviewed in the December 2006 issue

Athearn’s model has a highly detailed plastic superstructure that’s nearly filled with a two-piece weight that supports and encloses the mechanism.

Precision Craft’s locomotive is made of die-cast metal with excellent detail throughout. This model includes a smoke unit and engine crew.
Two impressive new HO scale models of the Union Pacific Big Boy 4-8-8-4 are vying for our attention. Made by Athearn and Precision Craft Models, the models are excellent replicas of the world’s biggest steam locomotive, a behemoth that most modelers consider to be the epitome of steam. The two models include automatic dual-mode Digital Command Control (DCC) and realistic sound systems that also operate on DC layouts.

Prototype. The first 20 UP 4-8-8-4s (4000-4019) were built in 1941 to speed traffic across the railroad’s most difficult terrain between Ogden and Wasatch, Utah. Overcoming the grades in this area demanded plenty of tractive effort, but speed was also important on this busy main line. Alco’s Big Boy achieved these goals by delivering its maximum 6,290 drawbar horsepower at 41.4 mph.

Dieselization shortened the Big Boys’ service, and they ran their final miles on Wyoming’s Sherman Hill in the 1950s. Their last regular runs occurred in July 1959. Eight Big Boys have been preserved.

Scale drawings of the 1941 order of Big Boys are included in the Model Railroader Cyclopedia: Vol. 1, Steam Locomotives (Kalmbach).

Common characteristics. Although they come from different makers, the Athearn and Precision Craft Big Boys share a number of characteristics, starting with the chassis. Like most of today’s mass-produced HO articulateds, each locomotive has a pair of engines that swivel beneath the boiler and firebox. This compromise leaves a gap in the steam pipes above the rear cylinders, but it allows the locomotives to negotiate model curves as sharp as 18″ radius. However, the Big Boys look much better on wider curves.

On prototype articulateds the rear engine was rigidly attached, and only the front engine moved from side to side on a hinge between the rear cylinders.

On both models, the wheels and driver tires are nickel silver and have RP-25 contours. All the wheel-sets match the National Model Railroad Association standards.

Both models capture their proto-type’s massive appearance and deliver excellent performance with realistic sound effects that function on conventional DC or DCC. How-ever, these dual-mode models include many user-adjustable configuration variables (CVs) that affect their operation and sound. This means the user may have to do some fine-tuning to obtain optimum performance. 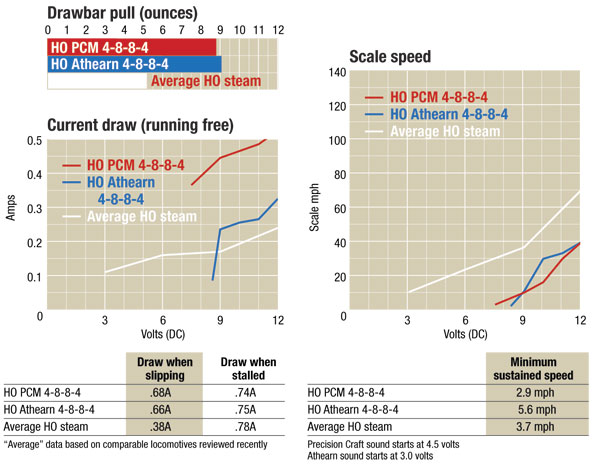 Athearn’s Big Boy
The Big Boy is Athearn’s largest Genesis-series steam locomotive. The model has a crisply detailed plastic boiler shell and cab, which enclose a heavy, die-cast metal chassis and mechanism. Detail on the model is excellent, with finely molded rivets, safety tread on the front platform, and a see-through tread pattern in the running boards. Many individual details are factory-applied. There are even tiny sanding nozzles just above the rails.

The cab is detailed with a working ventilator hatch, beading around its roof edges, and the rounded rear corners typical of Alco construction. The high generator location ahead of the cab is a railroad modification.
The model includes after-cooler brake piping on the pilot deck railings that was used only on the first 20 locomotives. Engines 4020 to 4024 had Wilson radiators behind their pump shields, and some if not all of the earlier engines were changed to match them. The model also includes simulated retracted smoke hood details inside the smokestack casing.

The centipede tender has a steel deck, but the instructions also show a body shell with a wood deck and another with the oil bunker that was used only with engine no. 4005. These alternates are evidently planned for future production of different specific prototypes.

The tender has a McHenry scale magnetic knuckle coupler. A swing-gate dummy coupler is built into the pilot, but parts are provided so it can be replaced with an operating McHenry scale coupler.

The model of no. 4006 has a smooth matte black finish with a bright silver smokebox and firebox. All of the colors are cleanly applied without overspray. The silver lettering is clear and opaque. However, many modelers will want to tone down the bright paint job with some weathering that’s more in keeping with the hard-working prototype’s dusty appearance. 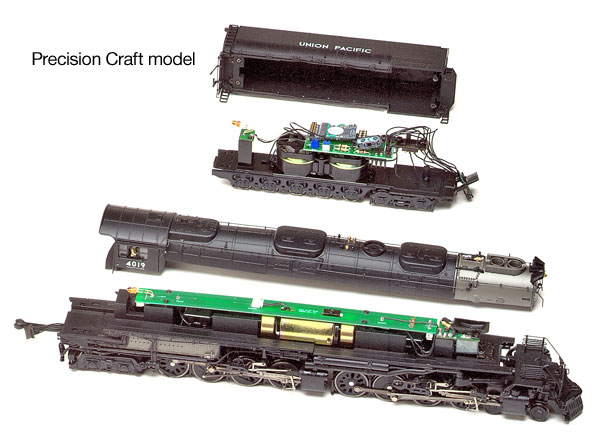 Both models have mechanisms concealed in the boiler with vertical gearboxes to drive the engines. The electronics are inside the tender.
The mechanism is concealed inside the boiler. It has a powerful can motor and flywheels mounted in a heavy, two-piece, die-cast metal weight. The engine gearboxes fit into the underside of the boiler where they’re connected to the motor by internal universals and drive shafts.

The side rods and valve gear are metal with a realistic steel color, and the eccentric cranks are correctly angled toward the front on both sides. However, the detailed crossheads and piston rods are molded in black acetal plastic.

Athearn’s model closely follows the prototype dimensions starting with properly spaced drivers which have the correct 68″ diameter. The tender and trailing truck wheels are the correct 42″ diameter. However, the pilot wheels are 33″ instead of 36″ diameter, and a scale 12″ has been added between the lead truck and the drivers for more clearance.

Electrical pickup is from all 16 drivers and eight wheels on the tender, so 12 wheels pick up current from each rail.

Performance. Athearn’s Big Boy runs smoothly and quietly. The third set of drivers in the second engine has traction tires, so the 4-8-8-4 delivers enough drawbar pull to haul 127 free-rolling freight cars on straight and level track. Using the model’s default speed range (5.6 to 39.6 mph), the locomotive started suddenly, so most owners will want to reprogram it to lower and expand the speed range.

On DCC, the default speeds were a bit higher (15.2 to 74.2 mph), but here again some fine-tuning of its CVs should help. However, obtaining a smooth starting speed below 5 mph will require programming a custom speed table.

Sound decoder. The model comes with a dual-mode Vibranta sound decoder that’s made for Athearn by Model Rectifier Corp. A push-button radio control is supplied for use on DC, and it can be used to reset some CVs with your power pack. On DC, this unit controls the speed, direction, bell, and whistle.

In DCC operation, the function buttons on the cab control the sound effects. In addition, numerous sound choices and many more adjustable options are available.

A pair of downward facing speakers are hidden in the tender, and the sound system’s volume can be adjusted manually or through a CV. The sound effects are realistic.

Each model uses a modification of acticulated locomotive design that allows both engines to swivel to negotiate tight model curves.
Precision Craft’s Big Boy
The Precision Craft Big Boy is made mostly of die-cast metal. The majority of the model’s 55 ounces are in the boiler, which consists of two well-detailed zinc alloy castings that join at the running boards. The lower half includes the firebox, cab floor, and brackets to mount the various mechanical parts. The top casting includes the upper boiler, sand box, steam dome, stacks, and boiler jacketing details. The cab is a separate casting fitted with wire handrails.

The model’s running boards have a raised edge and safety tread pattern on the walkways. Many details are factory-applied to match specific prototype modifications made during the lifetime of the full-size locomotives. Brake shoes are fitted for each driver, and six tiny sanding nozzles are included on each engine.

The cab details include a good-looking roof with beaded edges and Alco’s rounded rear corners. This engine’s generator is mounted in its as-delivered location (on engines 4000-4019) below the firebox on the right side between the last driver and the trailing truck.

The locomotive’s pilot deck railings include the as-delivered aftercooler piping for the air brake system on 1941 engines 4000-4019. The 1944 models (4020-4024) have the Wilson aftercoolers instead.

Big Boys were fitted with folding smoke hoods; these details are simulated inside the casing surrounding the twin stacks.

A can motor and pair of flywheels are mounted in the middle of the boiler to drive the gearboxes on both engines through concealed drive shafts and universal joints. The side rods and valve gear are metal with a realistic steel color, and the eccentric cranks are correctly angled toward the front on both sides. The crossheads and piston rods are metal castings that match the side rods.

The Precision Craft Big Boy includes a smoke unit that can be turned on or off. During operation it delivers a realistic plume of smoke.

Precision Craft’s matte black paint was smoothly applied on no. 4019. The smokebox and firebox are painted with a realistic dark gun-metal color. The model’s aluminum lettering and numbers are sharp and opaque.

The Precision Craft model matches the prototype dimensions, except for its overall length. A scale 6″ has been added at the engine’s pivot point and 9″ between the lead truck and the drivers to provide clearance on tight curves.

All 16 drivers, two wheels on the lead truck, and four tender wheels pick up current from the rails.

Performance. The Precision Craft Big Boy is a smooth and quiet runner. While it doesn’t use traction tires, its 43 ounces provide sufficient tractive effort to pull 123 free-rolling freight cars on straight and level track. The model’s default speed range on DC is a little slow, but on DCC it’s very close to the prototype locomotive’s speed range. With a little fine-tuning of the CVs, the DC maximum speed can be raised as desired.

In DCC operation the sound effects are controlled by the function buttons on the cab. The sound quality is good, and the system offers a wide range of fine-tuning adjustments. A reset is available in CV8 to restore the factory default settings.

As is the case with many sound-equipped models, the Big Boy’s default volume setting was too loud, but a reduced volume produced more-realistic sounds.

The tender has a Kadee scale magnetic knuckle coupler. A swing-gate dummy coupler is provided on the pilot. However, the dummy coupler can be replaced with a Kadee no. 27 coupler in a special mounting box that’s included.

A difficult choice. These two manufacturers have taken different routes to the same destination. Both models reflect top quality design and construction techniques. Athearn has a reputation for locomotives with excellent plastic bodies and metal chassis, while Precision Craft Models is building its reputation with high quality die-cast metal models.

Performance-wise, there’s only 1/3-ounce difference in drawbar pull between them, so both locomotives can haul 100-plus car consists that’ll be impressive on any layout.

Minor wheelbase changes allow these Big Boys to negotiate tight model curves. Both models will operate on curves down to 18″ radius, while the real locomotives needed a minimum 20-degree curve – that’s equivalent to an HO 40″-radius curve.

In short, the choice here depends upon the buyer’s preference for an all-metal or a plastic-and-metal locomotive model with or without traction tires. Both locomotives are handsome, well-built machines that capture the impressive size, power, and sound of their prototypes.