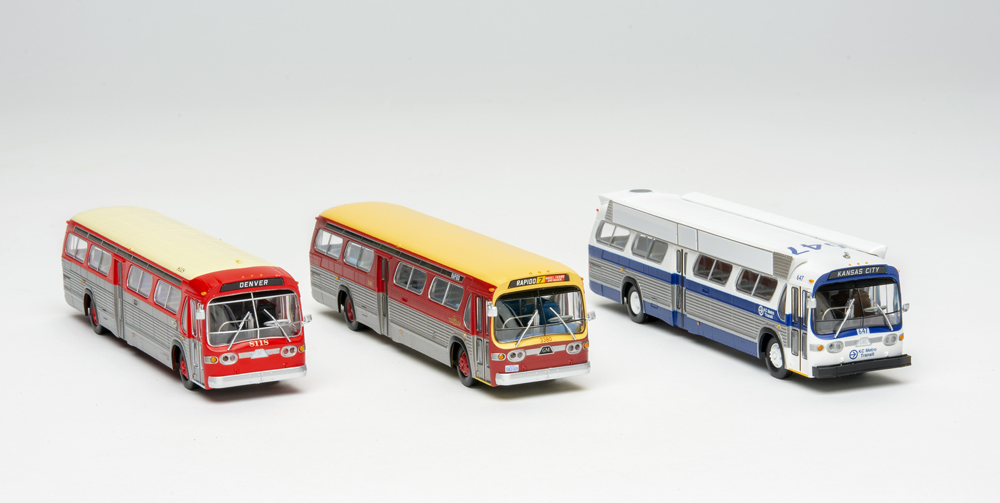 Rapido has returned with the second release of its HO scale New Look buses, and this time the vehicles are packed with an array of intricate details and new features that come together to create a model that impresses with its levels of realism.

The New Look buses were originally built by General Motors in 1959, with production wrapping up in 1986. There were over 44,000 of these iconic buses produced in all, and they were affectionately nicknamed the “Fishbowl” due to the unique curved windshield design. The New Look bus soon became the face of North American transit, applauded for its high-quality construction and technology along with its aesthetics.

This second release by Rapido is meant to represent the second through fourth generations of the bus, which spanned from the mid 1960s to final production in 1986. According to their website, this is the first-ever accurate model of the New Look bus in HO scale. We received the deluxe Denver Tramways no. 8118, the Kansas City no. 647, and the Rapido Trains no. 3380 to review.

The buses come pre-assembled, consisting of nearly 100 pieces. The models include extra mirrors, different types of bumpers, a sheet of pre-cut mudguards, and blank ad panels. Destination signs are pre-printed, but one bus per scheme can be purchased with a blank destination sign for personal customization. A sign template is available on the Rapido website in their Product Support section.

Possibly the most impressive part is the interior. Access this by flipping the bus over and spreading apart the plastic shell between the two axles, before shimmying the frame out. It’s not the easiest thing to pull apart, and does require some pressure and patience, so take your time with this step. Even though it seems like it would be the quickest method, try not to pull it apart by the axles in case they separate from the chassis. I found it to be easiest to carefully wedge the tip of a small screwdriver along the side to separate the shell while I pulled it out.

Inside, you’ll find rows of separate seats with painted handrails, etched-metal interior stanchions, a farebox, a steering wheel, and a grooved floor. Add a few passengers and a driver to the inside, and it will make a lively scenery detail on any layout.

Attention to detail wasn’t just saved for the inside, however. The shell has thousands of rivets (no, I didn’t count them all) lining the exterior, just like the prototype, and crisp painting. Unlike the first release of New Look buses by Rapido, the second release comes with a single width rear door.

Positional front wheels, made with rubber tires, allow for more flexibility when it comes to where you’d like this bus to sit on your layout. Have the New Look bus hugging a tight turn or angled through busy traffic; this can add more visual interest compared to having the bus traveling straight down the road.

The most eye-catching (or at least the flashiest) feature is the lighting elements. The New Look bus comes equipped with interior lighting, working headlights and taillights, and an illuminated front destination sign. It’s designed for a 9V to 12V DC power supply, which is not included.

Want to add a popular piece of history to your layout? Head on over to the Rapido website to take a look at the New Look buses. They’re well-made, chock full of details, and sure to be an eye-catcher on the road!