Home / How To / Prototype Railroads / What’s in a photograph?: C&O’s ‘Sportsman’ at Staunton, Va.

Train time at a small-city station in July 1958 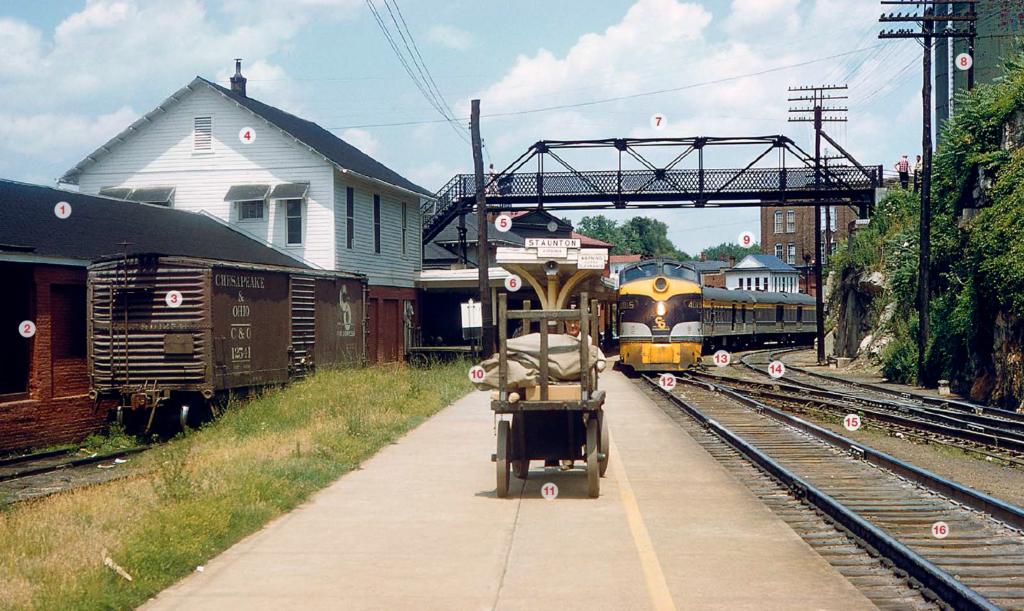 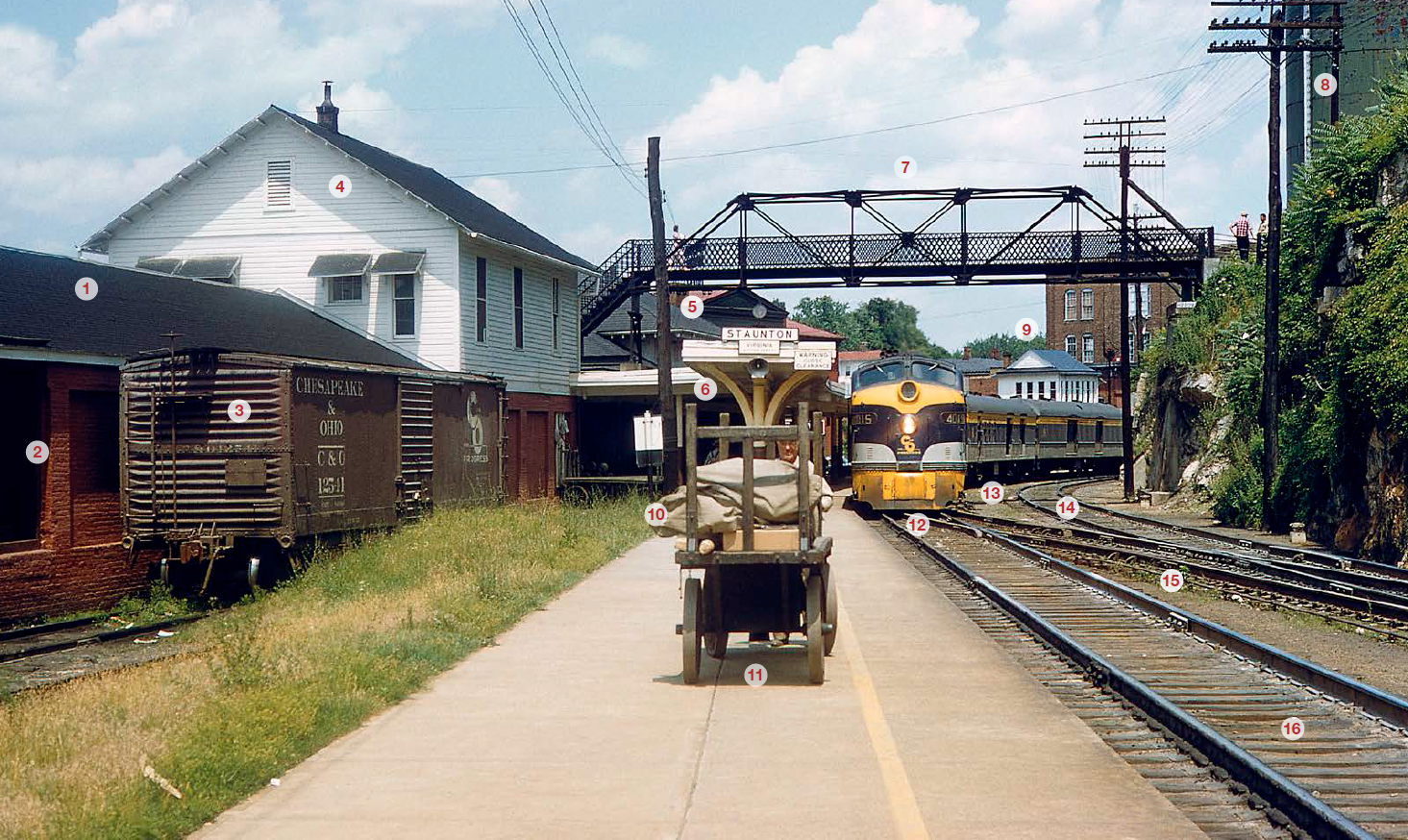 1 Freight house. Staunton (“Stan-ton”) in 1950 had a population of 19,927. All towns of this significance once had a freight house where less-than-carload (LCL) freight was handled. Warehousemen used a forklift or hand truck to “platform” freight between boxcars and local trucks. By 1958 most railroads were getting out of the LCL business, leasing their freight houses to forwarders or consolidators.

2 Door spot. Using doors for loading/unloading instead of a sheltered platform allows maximum secure floor space inside. Trucks backed up to similar doors on the street side.

3 Peddler car. Stations intermediate to big cities were served by cars that were moved from station to station in local freight trains, being partially unloaded and partially loaded as they went. C&O 12541 was one of 487 40-toncapacity cars in this number series in July 1958 with inside dimensions of 401⁄2 feet long, 81⁄2 feet wide, and 82 ⁄3 feet high, and a 6-foot-wide door. Obsolete for much commercial loading because the doors were too narrow for many forklifts and the low roof was restrictive, by 1972 only 37 remained on the roster. They were suitable for LCL, which often loaded below car capacity because of the way the material was sorted on the car floor by destination. Sometimes LCL was handled at team tracks or grade crossings.

4 Freight office. Located in this case on a second floor above a portion of the freight house, it housed the freight agent and clerks including a Bill Clerk who typed up waybills for cars originating within Staunton’s jurisdiction, distributed the copies as required, and filed waybills of incoming cars, telephoning shippers that their car had arrived. The Cashier collected freight charges and made up demurrage bills for cars that were held too long by shippers including cases where they were not ready to receive them (“constructive placement”). The Switching Clerk made monthly statements of cars interchanged to and from the other railroad at Staunton, short line Chesapeake Western, and switching settlement statements for cars on which the CW did only local switching service while C&O did the waybill work for the line haul. Demurrage and switching work required visually checking the tracks where cars were spotted, for a daily 7 a.m. yard check. The waybills, yard checks, and other documents, called Station Records, were required to be maintained for two years for audit by Interstate Commerce Commission inspectors.

5 Passenger station. Staunton’s was notable for being located on a relatively sharp 9-degree curve (637.3 feet radius, equivalent to an HO scale radius of 87.9 inches), with a canopy extending over the platform. The canopy remains in use today sheltering passengers using the triweekly Amtrak Cardinal. The station building itself has become a restaurant, as Amtrak has no ticket agents or baggage facilities here, but in 1958 there would have been ticket clerks and baggagemen on three shifts to serve customers of C&O’s eight daily passenger trains.

6 Platform shelter. The canopy at Staunton was supplemented by a short conventional platform shelter extending to the west, with a loudspeaker to inform passengers. Such shelters — wood structures supported on centered columns with angled struts — had a slight reverse slope to the center with asphalt roofing, with downspouts at intervals draining to pipes under the platform.

7 Footbridge. Unlike the situation at most British stations, where there was a footbridge connecting the platforms on either side of the tracks, this one (which the City of Staunton has recently rebuilt) was provided because of the steep hillside, connecting a paved footpath from the residential district south of downtown to the commercial streets north of the station.

8 Municipal water tank. Positioned on the hillside, this one is now gone except for its foundation, but a similar one still stands east of the footbridge. One or both of these tanks probably provided pressure for railroad standpipes in the days of steam operation, besides serving the commercial district of the town.

9 HD Cabin. C&O favored Manual Block operation using towers designated as Cabins and by their two-letter telegraph call signs. Manual Block works like a manned version of Centralized Traffic Control, with the train-order signal serving to hold trains where needed for meets or overtakes. The Cabin would often be an interlocking as well, with levers to control the switches for entering and leaving sidings. HD Cabin survives today with its ground floor serving as Amtrak’s unstaffed waiting room and the upper floor as a private residence.

11 Baggage wagon. Unchanged for decades, these simple platforms with slightly angled edges (to keep their loads from falling off), end railings, steel-tired wheels, and tow bars that could be linked to allow multiple wagons to be pulled at once, were a staple at every passenger station. Two of them at a time was about the limit for one man to handle; larger stations had small tractors to pull four or five at once. The baggageman peers over the mail sacks as he pushes the wagon along the platform.

13 The Sportsman. Behind the headend cars that we can see are coaches from Washington and Newport News to Detroit, a dining car, and two sleeping cars, one for Detroit and another for Chicago that will be handled beyond Cincinnati by the New York Central. Other sleepers will be added along the way, for Cleveland and Columbus, and an advanceboarding (“set-out”) sleeper at Columbus for Detroit. The train was inaugurated in 1927 after C&O acquired the Hocking Valley Railroad and control of the Pere Marquette, giving C&O a route to Detroit from Ashland, Ky. The train name derived from the connection to Michigan resorts served by the Pere Marquette, but most of the patronage was business travel to and from Detroit, Columbus, and Cincinnati.

14 Siding. Provides tail room for a local freight to switch industries without fouling the main track.

15 Crossover. Allows a facing-point move from the main track into the complex of industry tracks just west of the station (behind the photographer). A switch opens east into the siding (No. 14), simplifying switching for an eastbound local freight.

16 Single-track main line. Staunton is on C&O’s hilly Mountain Subdivision between Richmond and Clifton Forge, Va., the passenger route through the junction at Gordonsville with the line from Washington, D.C., and Charlottesville, where Washington and Newport News sections of passenger trains combined. Through freights between Richmond and Clifton Forge used the much easier James River Subdivision via Lynchburg, which was all downhill for loaded coal trains that formed a significant portion of the traffic and with just a half percent grade against westbounds, compared to 1.5 percent both ways on the Mountain Sub.

This article was originally published in the Winter 2014 issue of Classic Trains magazine.

One thought on “What’s in a photograph?: C&O’s ‘Sportsman’ at Staunton, Va.”