See these photos that will help inform and inspire a freelanced Ho scale model train layout. 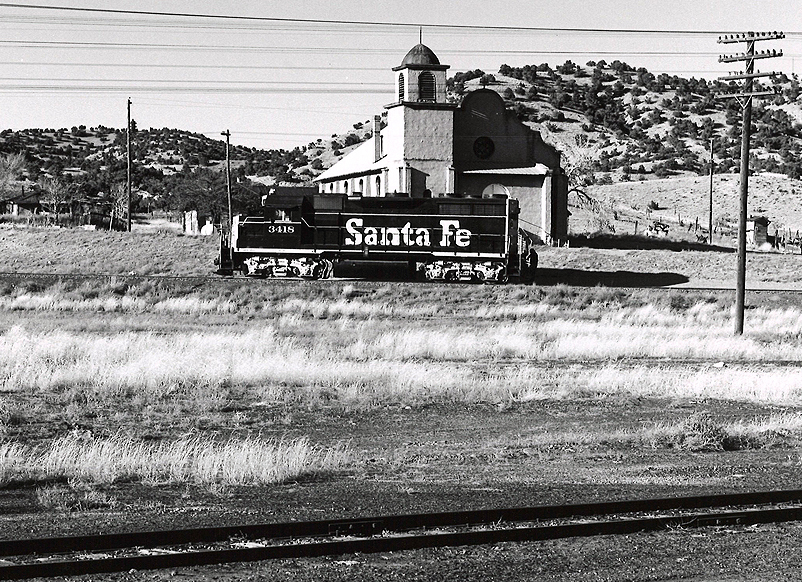 At sundown, a Santa Fe train of copper snakes through the curves of Santa Rita, New Mexico, enroute from Kennicott Copper's China Mine at Santa Rita to the smelter in Hurley. Trains operate round-the-clock. (August 25, 1972) R.T. Sharp photograph

Diesel switcher 2130 enters switch near Carlsbad, New Mexico, which is operated by remote control radio from the cab of the diesel. Antena and receiver can be seen at left. Santa Fe Railway photograph

Santa Fe GP35 with silver trucks switching on the Santa Fe branch in front of old, Spanish style church at Lamy, New Mexico. This gp35 just brought the Santa Fe local down to Lamy from Santa Fe and is awaiting Amtrak No. 4 before heading south (west) to Albuquerque. John C. Lucas photograph

View from the rear of Santa Fe combine 2317 as the train leaves mountains and begins the sharp descent toward Socorro, New Mexico. Clint Morgan photograph

True, this photo gallery from the David P. Morgan Library collection offers dedicated copper-mine running. But there are no “hot-shots”, high-priority merchandise freights, or even an intermodal train to be had. But there are also no steam locomotives — only hard-working, barely stopping, always burbling – growling diesels — and zebra-stripers at that!

Whether moving copper or cattle, these images evoke the type of railroading once enjoyed by late MR Executive Editor Andy Sperandeo, a noted Santa Fe modeler.

So, join us for this scenic look at Santa Fe New Mexico branchline service.