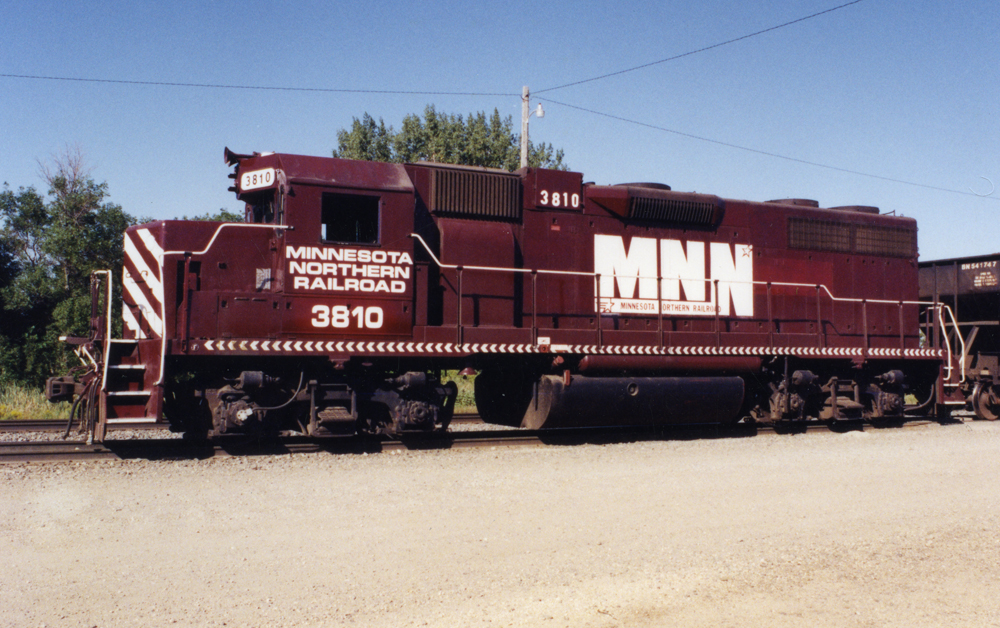 The mid-1990s brought a flurry of change to the railroad scene in Crookston, Minn., my hometown located in the northwest corner of the state. In September 1995, Burlington Northern merged with the Atchison, Topeka & Santa Fe. A year later, Burlington Northern Santa Fe sold off the branch lines served out of Crookston to shortline operator RailAmerica. The new railroad was called, logically enough, the Minnesota Northern (MNN). Never in my wildest dreams did I think I’d be in the front row to the first day of a new railroad. As a 17-year-old hobbyist and railfan, I was excited to have new things to model and different equipment to photograph.

The first two Minnesota Northern Electro-Motive Division GP38s to arrive in Crookston were nos. 3806 and 3809 (the duo would later be joined by sister engine 3810). I had no clue where the units were from. The maroon units had a white rectangle on the long hood covering what I presumed was the original road name. In the middle of the patch was a red “MNN” stencil, the reporting mark for the Minnesota Northern. Each side also had a “Child Safety – It Starts with You” slogan. The only other clue I had to work with was a maroon “K” in a white circle with feathers below on the cab sides. Then, one evening while I was paging through my copy of Paul Schneider’s Burlington Northern Diesel Locomotives (Kalmbach Publishing Co., 1993), I spotted a photo of a GP9 with the same herald. It turns out the GP38s were from the Kiamichi RR in Hugo, Okla., another RailAmerica property.

Knowing I wanted to model these units, I started taking detail shots of the GP38s. Side views; end views; and close-ups of the herald, stripes, lettering, and number boards. Anything I thought a decal manufacturer would want for making decals.

I sent off a letter to Champion Decal Co. in Minot, N.D., asking if they could produce three sets of decals. I received a polite reply declining the offer. Once I got into the industry, I realized how silly the request was. Silkscreened decals are time and labor intensive, and three sets wasn’t worth the effort.

Fortunately, this was about the time smaller decal manufacturers began popping up. An online search – using dial-up internet back then – led me to Oddball Decals. The company’s set no. 187-369 covered Kiamichi’s GP7s, GP9s, GP35s, and GP38s. Unfortunately, the set didn’t have the same end stripes or the safety slogans as the units on the Minnesota Northern. I resolved the former issue using Herald King 45-degree white chevrons (set no. DS-1). I never did find lettering for the safety slogan. Microscale Red Railroad Gothic (set no. 90105) provided the MNN lettering inside the patch.

Being a teenager, I didn’t have much of a hobby budget, so I used Athearn’s blue box EMD GP38-2s as stand-ins. Blue box models were readily available at McGiffin’s Hobbies and Crafts in nearby Grand Forks, N.D. Paint wasn’t much of a concern for me. My dad and grandfather operated an auto body repair shop, so I had access to pretty much any color in the DuPont automotive finishing system.

I applied all the decals I could to the model. I didn’t spray the GP38-2 with a flat coat, hoping someday I would find the safety slogan lettering. As you can tell by the photo, that never happened.

A new look for the Minnesota Northern GP38 fleet

In early 1998, Minnesota Northern freshened up its GP38 fleet. The Kiamichi herald, white patchout, and safety slogan were painted over. The railroad’s name was spelled out on the side of the cab, with the road number directly below. A large, white “MNN” herald was applied to the long hood. The last letter was slightly larger and had a tail that ran under the first two letters. The railroad’s name was spelled out inside the tail. There were also two stars in the herald (Minnesota is the North Star State, so it made sense).

Naturally, I was pumped to model the new-look Minnesota Northern GP38s. However, I realized the scheme was going to be a challenge. Fortunately, my dad knew the local sign maker involved with the new MNN herald. The sign maker graciously supplied me with masks for the long hood sized to HO scale.

I used a trick my dad taught me when applying the herald. I first painted the long hood white. Once the paint dried, I applied a thin gloss coat. Why? Because if any maroon paint bled under the mask, it would be easier to remove from the glossy surface. Trying to remove maroon from flat white paint would be difficult at best.

The new scheme was introduced right around the time I graduated from high school in the spring of 1998. Knowing I only had a few months until I started college, I wanted to get a few HO models painted before I left home. I was able to get the 3806 and 3810 partially completed. Obviously, there was no maroon lettering available for the herald. There were a few alpha-numeric decal sets that were reasonable matches to the prototype lettering on the cab, but not close enough in my opinion. And hand-applying 25 individual letters per side didn’t sound like my idea of fun.

In August 1998, shortly before I left Crookston to start my freshman year at Concordia College in Moorhead, Minn., locomotives from RailAmerica’s other Minnesota operations (Dakota Rail, Otter Tail Valley, and St. Croix Valley) began arriving in Crookston. This naturally piqued my curiosity. It turns out they were cycling through town to get repainted in RailAmerica’s red, silver, and blue corporate scheme. If memory serves me right, I don’t think all three GP38s were fully lettered in the early 1998 scheme before being repainted.

During the repainting process, some of the units from RailAmerica’s “Minnesota Cluster” were reassigned to other railroads. One of MNN’s three GP38s, the 3809, was reassigned to the Esquimalt & Nanaimo Ry. in British Columbia.

The RailAmerica corporate scheme was the third look for the MNN GP38 fleet in less than two years. However, the striking red, silver, and blue was too sharp to pass up. Fortunately, the landscape of the decal world had changed. During an internet search for custom decal manufacturers, I discovered Highball Graphics. I exchanged a few e-mails with owner Jim Abbott. I was able to supply him with photos and measurements to make a custom run of waterslide decals. Set no. L-127 covers RailAmerica’s Minnesota lines. Set no. L-135 covers several other RailAmerica operations.

In August 2000, RailAmerica sold the Minnesota Northern and St. Croix Valley to K.B.N. Inc. The MNN’s remaining two GP38s were reassigned to other RailAmerica properties. The 3806 wound up on California’s San Joaquin Valley RR. The operation was taken over by the Genesee & Wyoming in 2012. The 3806 now wears the shortline operator’s orange-and-black scheme and is the SJVR 2082.

The 3810 went even further north after the Minnesota Northern was sold. The GP38 was assigned to the Mackenzie Northern Ry., which operates in Alberta and the Northwest Territories. Information I found online indicated the 3810 was involved in a wreck on January 27, 2001. The four-axle road unit was scrapped in October 2001.

I revisited the Minnesota Northern GP38 fleet again as a staff member with Model Railroader magazine. In 2013, then-editor Neil Besougloff asked if I could write an article on painting a locomotive in a multi-color scheme. Minnesota Northern GP38 no. 3809 seemed like a good candidate. Neil agreed, and I got to work painting an undecorated Atlas GP38. You can read about the project in the September 2013 issue.

One thought on “Modeling the Minnesota Northern GP38 fleet”