Details on a BNSF Ry. engine spotted while on vacation sparked ideas for modeling projects 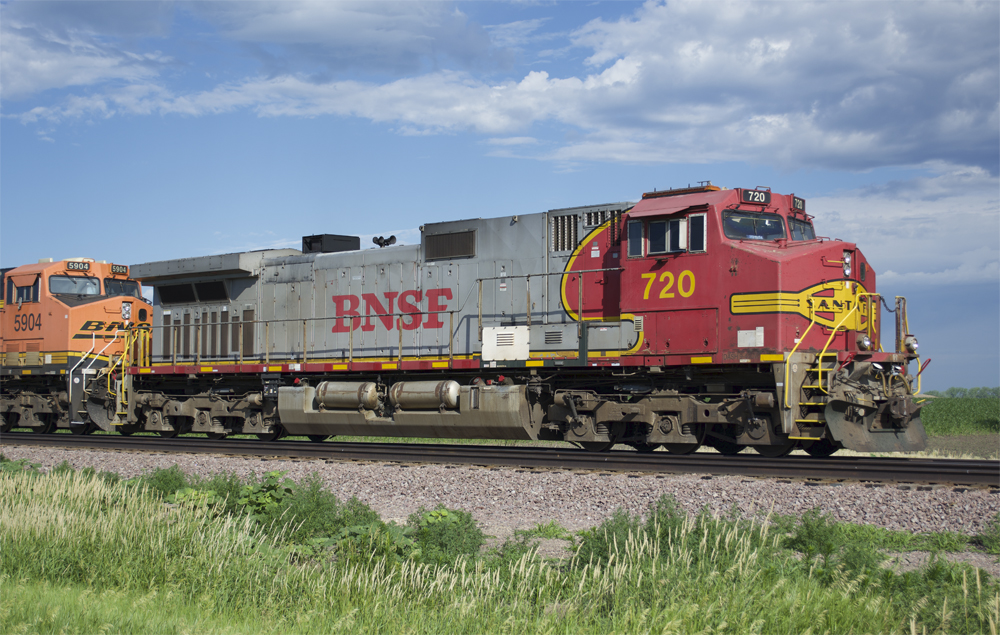 Five modeling ideas from a General Electric Dash 9-44CW: In late June 2022, my wife, kids, and I visited my brother- and mother-in-law in Milbank, S.D. The parsonage they live in conveniently overlooks the BNSF Railway Appleton Subdivision, which runs between its namesake in Minnesota and Aberdeen, S.D. When I woke up on the morning of the June 30, I noticed a train waiting in the hole. I quickly got dressed, grabbed my camera bag, and drove down to the grade crossing at 480th Ave. on the east end of town.

Leading the train was BNSF General Electric Dash 9-44CW No. 720. The locomotive, built in July 1997, was painted in Santa Fe’s warbonnet scheme with “BNSF” lettering on the hood. The six-axle road unit looked pretty good for having been on the rails for nearly a quarter century. Since the train was waiting for a new crew, I took some detail photos. As I was looking through the viewfinder, I started to notice little things that would make re-creating this unit a fun modeling project. As I researched the model further, I came up with five modeling ideas from General Electric Dash 9-44CW No. 720.

General Electric Dash 9-44CW diesels are available from Athearn (HO scale), Kato USA Inc. (HO and N), and ScaleTrains (HO and N). InterMountain Railway Co. is taking reservations for its N and HO scale models. Athearn offers its Dash 9 in the BNSF warbonnet paint scheme, and InterMountain lists the scheme among those it will be offering. BNSF Ry. Dash 9 decals were produced by Microscale in N (60-1008) and HO (87-1008).

The first thing that stood out to me was the snow plow. Instead of being silver, it’s dark green, like that used on BNSF locomotives painted in the Heritage I and II schemes. After looking at other photos of the 720 online, it appears this is a replacement plow, added sometime around 2014.

To re-create that look on a decorated model, I’d carefully removing the factory-applied part and airbrush or spray-paint it. Once the paint is dry, add some dirt and grime around the openings for the m.u. hoses.

If you’re starting with an undecorated model, paint and weather the plow prior to installation.

On top of the cab I noticed positive train control, or PTC, antennas had been installed. To learn more about what PTC is, read this article from Trains magazine.

Based on other prototype photos of the 720, the antennas were added sometime after 2019. The antennas are painted orange, a color used in BNSF’s Heritage I, II, and III schemes.

MAC Rail Products offers the PTC antenna array in HO scale. The 3-D printed part is shipped in white primer. The final color(s) need to be applied by the modeler.

Some repair work was done behind the cab on the engineer’s side. Part of the sill was repainted dark green, and a body panel was replaced. It’s hard to tell if the panel is painted or in primer. If I were to guess, it’s the latter. It’s likely the shop that made the repairs didn’t have paint to match the warbonnet scheme.

Re-creating this look would be easy with an airbrush or careful brush painting. Just mask off the areas and follow the prototype’s lead. Note that you’ll need to add a new yellow sill stripe, which you can find from several different decal manufacturers, including Circus City Decals, Highball Graphics, and Smokebox Graphics.

As traffic volumes fluctuate on railroads, locomotives may go in and out of storage. To keep water out of the engine when locomotives are stored, a cover is put over the exhaust stack. I’ve seen various items used to cover stacks, including tarp, metal plates, and buckets (the latter typically on switchers or units with conical stacks).

The 720 was fitted with a metal box that frames the stack. The box has two metal plates, each with a grab iron near the top and pins at the base that seat in rails. When in service, the plates are stowed vertically, as shown in the photo. When the locomotive is in storage, the plates are lifted up and placed over the stack.

When I rolled out of bed on June 30, I didn’t think I would get five modeling ideas from a General Electric Dash 9-44CW. The details I was able to see on just the engineer’s side of BNSF No. 720 are enough for an enjoyable modeling project. It turns out the air conditioner on the conductor’s side is painted orange and green. Pretty neat!

If you’re looking for ideas for your next modeling project, take a trip trackside. Not only is railfaning fun, but it can be inspirational.