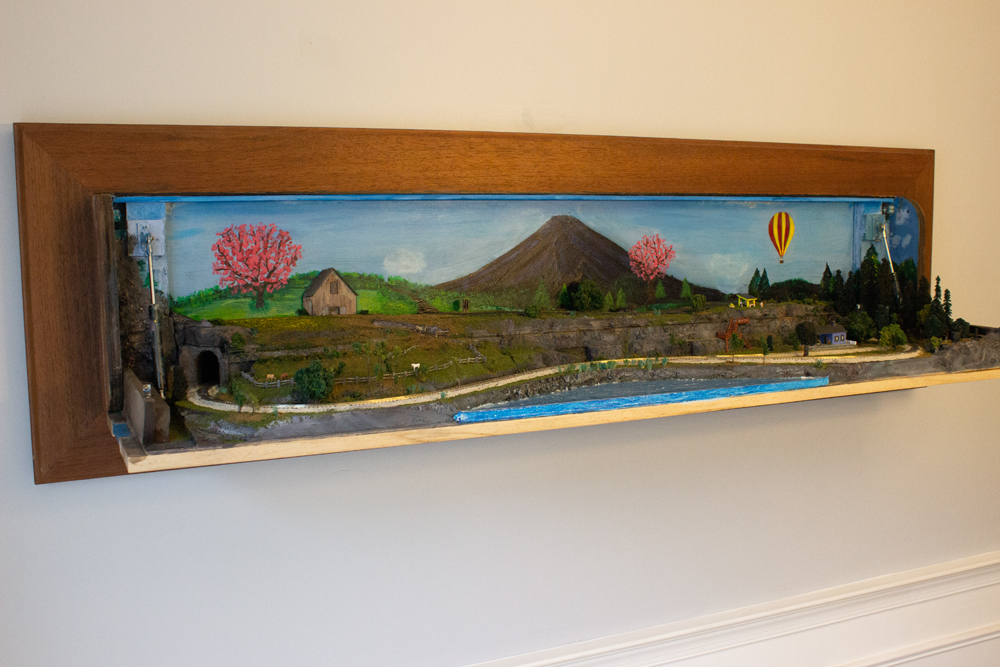 Inspired by Peter’s love of travel, the layout follows the fictitious theme of a Pacific island resort with a short line passenger train to transport guests to some of the island’s attractions. The backdrop of his layout, which is inspired by a picture of Mount Fuji, was painted over the plywood backing of the frame using acrylic.

The layout measures 68” x 20” tall x 5” deep and is attached to the wall using French cleats. Peter determined 4.75” depth is the minimum needed for the interior of the layout to allow all the structures and trees to fit when folded. To make this piece look less bulky and not appear to be sticking out from the wall too far, he chose a 1.75” depth reveal at the frames edge to give the illusion of a flatter appearance.

The epoxy resin art piece measures 60” x 12” and is made from .75” maple with a glued .25” plywood backing, and a wavy epoxy resin poured in between. The most crucial part of this project is the hinged arms located at the ends of the layout/art piece, which hold the art to the frame with 5/16” bolts and skateboard bearings.

To fold the layout, Peter designed hinged terrain. The ground cover, trees, roadway, and fruit stand all get flipped over. The tallest trees (as shown in the photo) get folded neatly to the side on their own hinged base.

The rocky cliff terrain was carved from pink insulating foam board glued and scratched over with a knife, then painted with acrylic. All structures (barn, station, fruit stand, fence, and stairs) were scratchbuilt from scrap wood, hobby sticks and toothpicks.

The trees, soils, and grasses are store bought, but the tall grass in the middle along the ocean coast were made from paint brush bristles cut, hot glued together, and painted.

An on edge vertical plywood wall is made from two laminated ½” thick pieces of plywood and positioned over the plywood and maple base and attached with wood glue and screws to keep the layout flat. This gives the structure for the rocky hillside terrain coverage Peter needed to conceal the backside of the track and train, to give the illusion of the train traveling into the valley towards the volcano backdrop.

The track is Kato (Unitrack) with 12” Radii laid directly on 1” foam and glued. The configuration is a very simple dog bone shape continuous loop with one turnout for the terminus train station. The track has two cut sections to allow the layout to fold up while allowing the back straight away section to remain intact and allow the train to stay on the track and eliminate the need for set up when folded down.

Peter Waldraff has always prioritized saving space when building a layout. His interest in this modeling niche first started when he was 27, when he built his first N scale layout in a custom built, glass-covered coffee table in order to maximize what minimal room he had in his 1,200 square foot house.

However, after the birth of his children, it would be a few years before he got another chance to build another space-saving layout. After returning to the hobby, his most recent project is a layout that can be folded up and concealed behind a hand-made piece of wall art when not in use. Currently hanging on the wall of his dining room, Peter Waldraff’s N scale Epoxy River Railroad, which took about 8 months to build, manages to feature mountains, bodies of water, and intricate details all within a 20” x 68” x 5” space.