Home / How To / Model Train Layouts / A busy engine shop, a peaceful river crossing, a river in the Steel City, and other model railroad photos 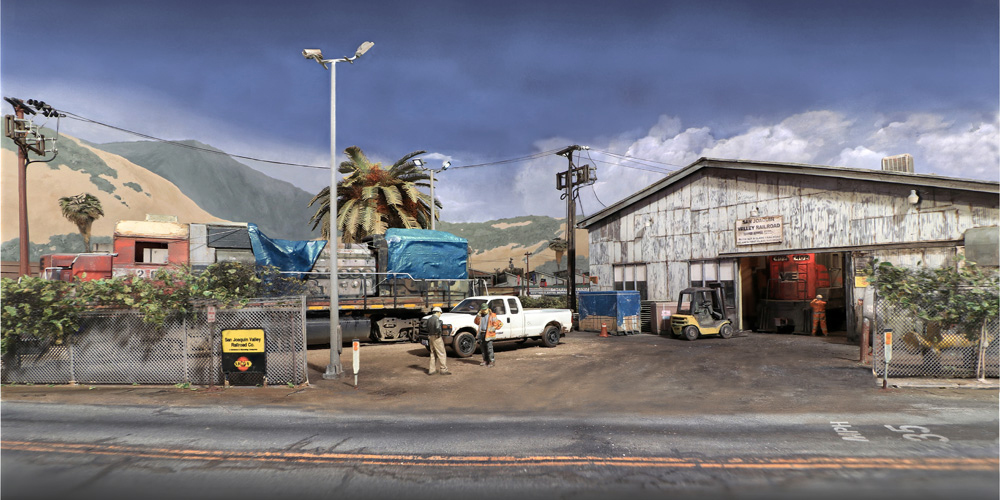 The old Visalia Electric Railroad has been folded into the San Joaquin Railroad, and the crew at the Exeter, Calif., shop is working to bring the locomotives up to current requirements. Rick Sutton of Atascadero, Calif., shot the photo on his HO scale layout. The locomotives are from Athearn and Atlas. The shop building is a photo of the prototype structure, laminated on a 3D frame.

The conductor looks out the window at just the right moment to be caught by a railfan’s camera as Iowa Interstate EMD SW1200 switcher pulls a bulkhead flatcar across the Rock River. This scene is from Scott Thornton’s HO scale IAIS Milan Branch layout. The locomotive is a Proto2000 by Walthers model. Scott scratchbuilt the bridge and installed a sound module to play the sounds of flowing water and birds chirping.

Atchison, Topeka & Santa Fe diesels await fueling at the BNSF Mojave service area. The N scale scene is part of the freelanced “Mojave style” layout built by Eugen Haenseler of Horgen, Switzerland. Eugen built the expansion to his model railroad to give him a place to store his locomotives.

A pair of Pittsburgh & Lake Erie slow freight drags pass each other beneath Conrail’s Port Perry Bridge while city lights twinkle to life in the background. Todd Treaster of Burnham, Pa., who is an engineer on the full-sized Norfolk Southern, aimed his camera up the Monongahela River toward Pittsburgh on his N scale railroad for this photo.

Erie Railroad no. 132, an 0-8-0 switcher, is patiently waiting while the icing crew fills a reefer’s ice bunkers at the San Martino industrial district. The scene is on the HO scale Grand Allegheny Railway layout built by Gary Reynolds of East Amherst, N.Y. The icing platform is a modified Fine Scale Miniatures kit. Gary shot the photo.

Southern Pacific tunnel motor no. 8546 finds itself on Santa Fe rails as it leads a westbound freight across Crazy Woman Creek. The scene – based on an actual creek with that name on the Durango & Silverton Narrow Gauge Railroad – is on John Vavra’s HO scale layout. The locomotive is from ScaleTrains.com and the trees are from McKenzie Bros. Timber Co. John shot the photo.

Pennsylvania Railroad Electro-Motive Division SW9 no. 8529 emerges from a tunnel and crosses over a bridge while youngsters play in the swimming hole below on a summer day in 1959. Heinz-Ulrich Grumpe of Muenster, Germany, shot the photo on his freelanced 31” square N scale exhibition layout, named the Grumpy Valley Mining Railroad. The locomotive is a Life-Like model.

4 thoughts on “A busy engine shop, a peaceful river crossing, a river in the Steel City, and other model railroad photos”