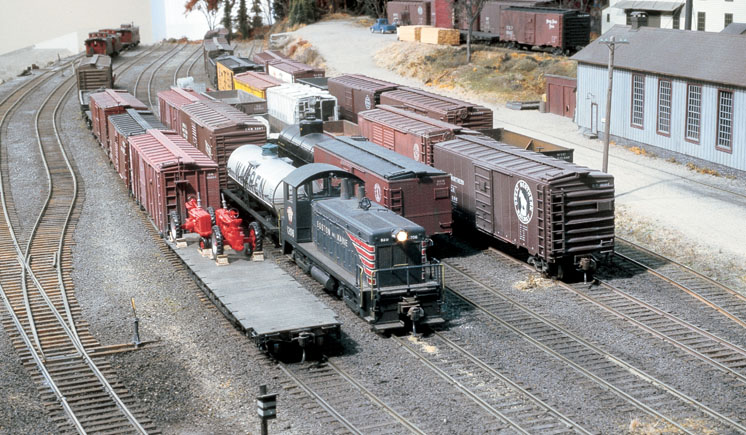 The switch crew in Woodsriver Yard on Paul Dolkos’ old Boston & Maine layout sorted cars according to waybill information to make up several different trains, pickups for trains passing through, and cuts for delivery to Woodsriver industries.
Paul Dolkos

The car-card-and-waybill freight-car routing system I’ve described in my ­previous two columns gives you all the information you need to organize cars into trains. The car-card/waybill combination shows where each car is going next, and yard files help you sort cards and cars together to make up trains. You determine what trains your railroad will run and what destinations each train will serve, and use the waybills to show which cars go into which train.

One basic plan for freight trains is to run both through freights and way freights in each direction from the originating yard. This automatically gives you four distinct car classifications, east and west (or north and south, depending on your railroad’s orientation) “throughs” and east and west “shorts.”

Through cars are those going to and beyond the next division or crew-change point, whether that point is modeled on the layout or represented by staging. Short cars are those consigned to ­stations short of the next terminal, or ­between here and there. Through trains forward their cars with few or no stops to switch cars along their runs. Way freights take the shorts and stop ­wherever necessary to set out and pick up cars as indicated by the waybills.

If you use taller block label cards in your yard file boxes, as I suggested last time, you can add train blocking information to them. This might include the station order blocking for way freights and a list of destinations beyond the next terminal for though freights. If you don’t use the label cards, provide a convenient reference sheet or chart to help the yardmaster get trains organized.

It may be that your classification yard is adjacent or at least close to a staging yard at one end of your system. I’d still suggest that you make up separate through and way freights to run into staging. Those trains won’t really do any switching, but they help build the illusion that there’s more railroad that way.

If there are industries at or near your yard, you can add another classification for “proper” or “city” cars. These are cars coming into the yard not to be dispatched in other trains, but to be delivered to ­industries within its switching district. (These might be represented by a designated track in the staging yard.)

Beyond the basics, there are many other ways to organize cars into trains. You can choose the ones that work best for your railroad, or that reproduce the traffic of your favorite prototype.

◼ Commodity classifications are one way that many railroads serve ­particular industries or groups of industries. These can include livestock, grain, coal and minerals, oil, less-than-carload merchandise, automobiles, auto parts, and perishables like meat or fruit. Cars carrying such commodities, as indicated by the waybills, can be put into trains dedicated to that traffic.

◼ Empty and load status is another way to group cars into trains. Railroads may prefer that regular freight trains carry only or mostly loaded cars (as shown on the waybill). Empties left over after the loaded train is made up may be added to fill out the train’s “tonnage” (on model railroads, length is the more likely concern), or can be dispatched in extra “drag” freights back to their home roads or to regions where they’re needed again for loading.

◼ Routing and interchange con­nections may require other trains. If your east-west railroad has a junction (even in staging) where another main line takes off to the north, use the “routing” or “via” lines on the waybill to indicate which cars go that way and build separate trains to take those cars. If there are important interchanges with other railroads, you may run trains specifically for that traffic, switching interchange tracks but not industries along the way. Or run a transfer from your yard into staging to take cars collected for the “foreign” road.

Andy Sperandeo (1945-2015) was a longtime staff member and editor of Model Railroader magazine.