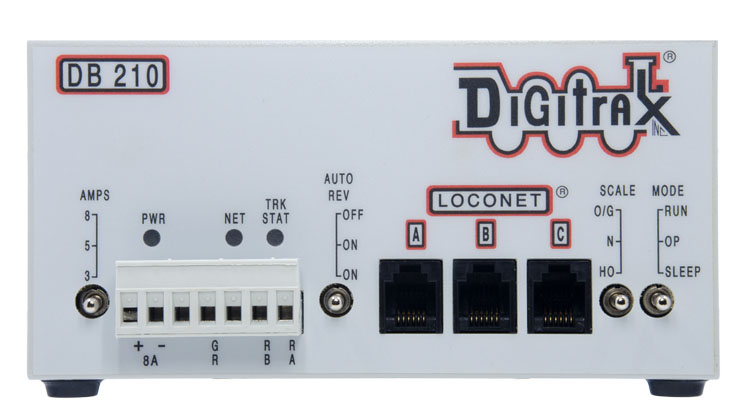 ❶ Getting a boost. The Digitrax DB210 booster can supply 3, 5, or 8 amps depending on the power supply used with it. Note the toggle switch for selecting from three possible voltage ranges for N, HO, and O/G scales. 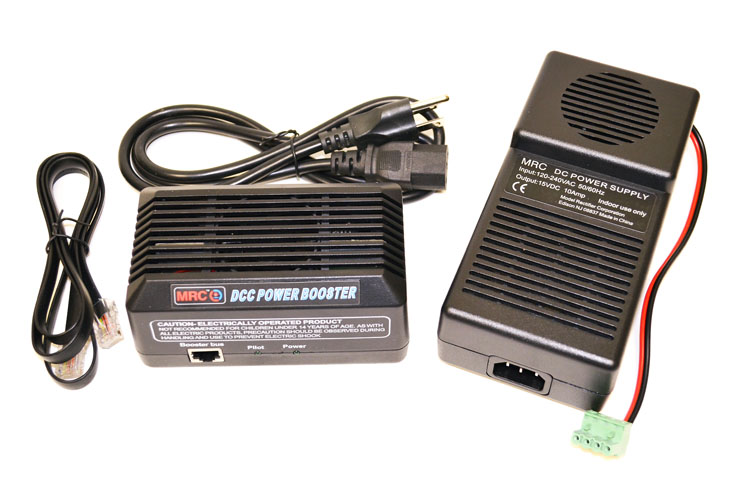 ❷ Keeping cool. The Model Rectifier Corp. boosters are available in 3.5 and 8 amp versions but externally are essentially the same. Both include a fan to help keep the components running cool. 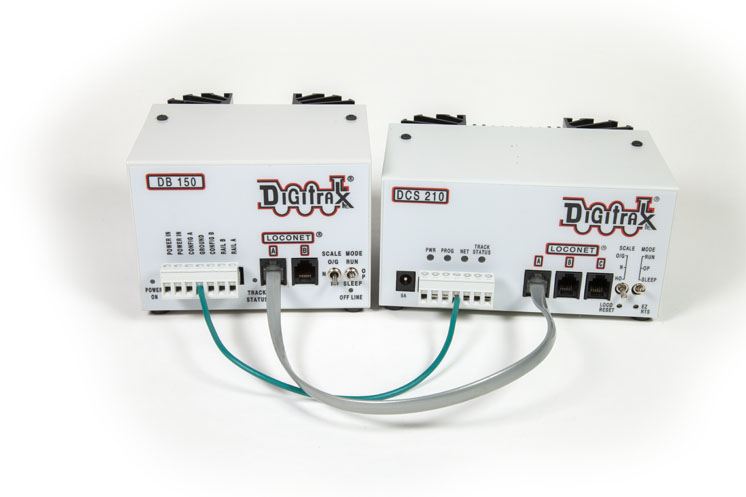 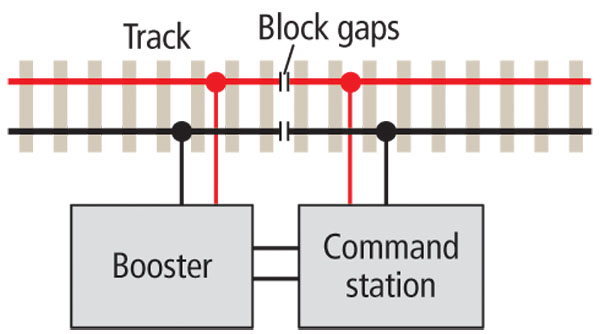 ❹ Building blocks. When adding boosters to a layout, the track must be subdivided into electrically isolated blocks, each powered by either the command station or booster(s).
In my August 2018 DCC Corner column in Model Railroader magazine, I discussed considerations for selecting a Digital Command Control (DCC) system. This month, we’ll look at boosters – what they do, how to determine how many you need, and wiring options. But first you need to understand what a command station does.

The command station actually has two major functions: It acts as a small computer keeping track of your locomotives, function settings, speed, and more. It also converts the commands it needs to send out to the decoders into a digital signal.

The digital signal it creates is low voltage and low amperage. The signal needs to be converted to the higher voltage and amperage signal that is sent out on the track; that’s the job of the booster.

Most DCC command stations have a built-in booster, and that may be all you’ll ever need. I regularly operate on a friend’s mid-sized layout that runs on the output from a single Digitrax Zephyr unit capable of putting out about 12.8V at 2.5 amps. However, if he wanted to run consists with multiple locomotives, or more trains simultaneously, he would probably need to add a booster.

Boosters are available in various amperages. It’s important to realize it isn’t necessarily better to use the highest amperage unit available. Instead, several smaller units or power managers may be a better option.

Also, mixing units with different output capabilities isn’t a good idea. In some circumstances, such as when a locomotive derails and shorts out across track gaps powered by two different boosters, it’s possible for a higher-powered booster to feed current back into the lower-powered unit, possibly causing it to fail. This is especially true if the boosters are from different manufacturers. In most cases both boosters’ self-protection circuits would kick in, but it’s best to plan for the worst-case scenario.

So how many boosters do you need? That depends on how many locomotives, lighted cars, and accessories you plan to operate using track power. First, consider the locomotives and scale. Motors have changed a lot over the last 30 years, and the amount of current they require has decreased greatly. Consequently, if you have a collection of older locomotives or model in scales larger than HO, motors may require as much as 1.5 amps, each. Modern HO locomotive motors, on the other hand, typically require .3 to .5 amps, and the smaller N and Z scale models draw half that.

Now just because a motor only draws .3 amps, it doesn’t necessarily mean that’s all you’ll need, especially if you’re operating diesel locomotives. While steam locomotives typically operated as single units, diesels are often operated in multi-unit consists. If you want to operate a two- or three-unit consist, you’ll need enough power to run all of the locomotives at the same time.

Another factor to consider is if there are any other powered accessories in the train, such as a sound or smoke unit, or in the case of passenger trains, lighted cars. The power demands of those devices have to be added into the total power needs.

Let’s look at an example of a five-car passenger train pulled by a pair of diesel locomotives with sound units installed. Assuming these are fairly new locomotives, they probably have efficient can motors requiring less than .5 amp each at maximum load with sound and lights turned on. Next, consider that the five cars are lighted with two .03 amp incandescent bulbs each.
Add that all up and we find that 1.3 amps would be required. Now if you also wanted to hook up a string
of lights for the station and stores in town along with some other accessories, you could end up needing 2 amps or more just to operate one train on your layout.

Boosters share a common weakness: They generate heat internally. This heat is a

by-product of the electrical components used in the circuits and the need to decrease the input voltage to the amount we want out on the tracks. Under normal operating conditions, most boosters can run all day without heat being an issue.

However, if boosters are placed next to a heat source, in a sunny location, or run for long periods near their maximum operating amperage, the excess heat starts to build up inside the enclosure. For this reason some manufactures like Model Rectifier Corp. (MRC) install small fans in their boosters to cool them ❷. Others attach their power transistors to the inside of the enclosure and use it as a heat sink, or install a large heat sink on the enclosure itself, which you can see on the backs of the Digitrax units in ❸.

But even boosters with large heat sinks may not be able to get rid of all the excess heat. To prevent damage to the electrical components, boosters have temperature sensors that automatically shut the booster down when the internal temperature exceeds a set value. That’s why most 5 amp boosters can only maintain a sustained output of about 3 amps.

If you experience periodic shutdowns when operating several locomotives, then you should suspect excess heat as the cause. The easiest way to deal with this issue is to place a small fan so it blows directly on the booster. If you have all your boosters in one location, you can build a box for them and install a small computer fan in it to keep the boosters cool. I described my installation in “ABCs of DCC power district management” in the October 2017 issue of Model Railroader.

Also, as soon as you add a booster you’ll need to subdivide the tracks into electrically isolated blocks ❹. Doing this prevents short circuits in one block from shutting down the booster and locomotives operating in the other block. Shorts are a fact of life, especially with some types of turnouts, and boosters come with built-in short circuit protection so they shut down when a short occurs. That means every train in the block that booster powers will also shut down until the short is cleared.

You can add additional blocks with separate boosters to limit the effects of short circuits, or you can install multiple circuit breakers between the booster and the blocks. Several manufacturers offer stand-alone circuit breakers that make it easy to add additional protection and help manage your power needs on medium to large layouts (my article in the October 2017 MR describes this also).

For more on wiring your layout for DCC, see my book Wiring Your Model Railroad (Kalmbach Books)