Sketching With Steve: The wye, the turnback loop, and the turntable are all ways to turn a train 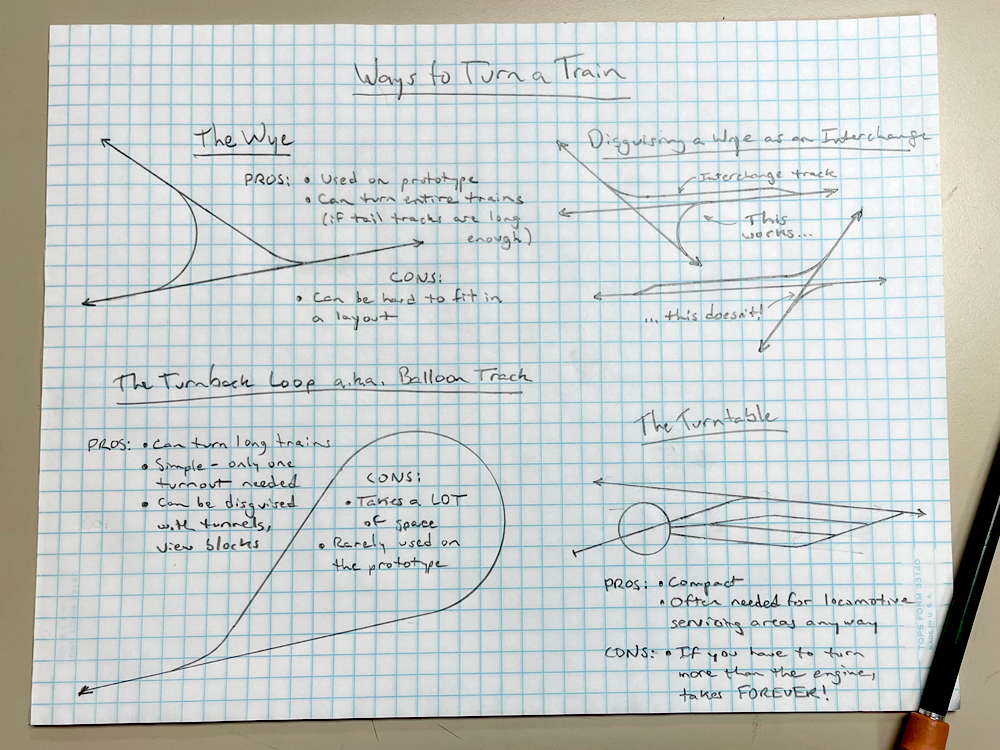 Unless you’re content with watching your trains go around and around a simple loop, eventually you’re going to be looking for ways to turn a train. Don’t get me wrong, it’s entirely possible to go through your entire train-operating career and never have to turn a train; maybe you always play the yardmaster, or your layout only handles bridge traffic, whatever. But eventually those cars you’re shuffling around have to be delivered to their destinations, and that job most often falls to a local freight. These trains most often start out in a yard, set out and pick up cars along their route, then return to the yard. Unless you want to shove your local freight backward all the way home, it has to turn around at the halfway point. And that’s why such out-and-back local freights are called “turns.”

There are other reasons to turn trains. For instance, when a passenger train reaches its terminal destination, it has to be turned around to be prepared for its return trip. (Unless it’s a commuter train made up of push-pull equipment, of course. But there are exceptions to every rule.) When that time comes, there are three basic ways to turn a train. There may be others, but if you simplify them, you’ll find them to be variations of these three methods. Take a look at my sketch above.

Ways to turn a train: The wye

A wye is one of the most common ways to turn a train on the prototype. It’s fairly simple, after all – three tracks connected by three turnouts in a configuration shaped like the letter Y. Pull through two of the turnouts, line both turnouts in the other direction, back up through the third turnout, switch that turnout the other way, then pull forward onto your original track, now facing the other way.

Prototypes favored wyes because they often occurred naturally wherever branch lines joined a main. If where you come off a branch you have a choice of routes to enter the main in either direction, you’ve got a wye you can use to turn your train.

Sometimes you can take advantage of another track formation and turn it into a wye. For example, if you extend one leg of a wye to cross the other on a diamond, it can represent an interchange between the two lines. Just be careful where you add the curves to connect the tracks. To work as a wye, both the connecting legs have to be on the same side of the diamond. If the legs are on opposite sides of the diamond, as shown in the sketch, there’s no combination of moves that actually turns the train.

The biggest drawback to a wye is the amount of real estate it takes up on a layout. The least obtrusive place to put one is at the base of a peninsula. But if you’re building an around-the-walls shelf layout without peninsulas, you may find it difficult to fit one in. Try tucking it in a corner, but even there you might have a hard time including a long enough tail track to turn more than an engine and a couple cars.

Ways to turn a train: The reverse loop

The easiest way to turn a train is the reverse loop, also called a turnback loop or balloon track. They’re popular on model railroads because, with just one turnout and one reversing section, they’re straightforward to lay out and wire. Since turnback loops are common at the end of a peninsula or shelf, turning one into a reversing loop is often a simple matter of adding a cutoff track. You can disguise them by using the cutoff as an industrial siding or hiding some of the track in a tunnel or behind a view block.

Although such track arrangements aren’t common on the prototype because of the large amount of space they take up, they aren’t unheard of. Balloon tracks are sometimes found at large passenger terminals like New York’s Grand Central Terminal, where the necessity to quickly turn consists in their entirety trumps the cost of real estate. As John Armstrong, the dean of track planning, pointed out in his book Track Planning for Realistic Operation, the reverse loop has another advantage particularly important in colder climates: unlike the other turning arrangements, it can be cleared of snow by a locomotive pushing a snowplow without any backing maneuvers.

Ways to turn a train: The turntable

If you’re turning a local freight, a turntable and a runaround track are really all the turnaround facilities you need. Most freight cars can be unloaded from either side and therefore don’t need to be turned. So simply park your train on the siding, pick your caboose (if you’re using one) off the end of the train, turn it on the turntable, and park it in a trailing-point spur somewhere nearby. Then turn your locomotive on the turntable, run around and hitch up to the other end of your train, back onto the caboose, and be on your way.

If you’re dealing with a passenger train, some cars might need to be turned, as well. Passengers in coaches generally don’t appreciate riding backwards, and the rear of your observation car needs to face the end of the train, for instance. The biggest drawback to using a turntable on a passenger train is how long it takes to turn each car separately. If your passenger terminal doesn’t have access to a wye or a balloon track, it might be good to have a yard hostler handle all that car shuffling and turning while the road locomotive is being serviced for its return run.

So what do you do if you need to turn a train at a terminal where there are no turning facilities? This happens on the prototype, too. About all you can do is run around the train and head back to home base with the locomotive facing backward. This isn’t a big deal with a diesel hood unit, where the choice of what’s the front end and what’s the back is kind of arbitrary anyway. On a steam road, it’s a little more awkward. But engineers did it when necessary.

One thought on “Ways to turn a train”