Home / How To / Build a Model Railroad / Sketching with Steve: Planning a structure kitbash

A quick drawing can help you evaluate options, aesthetics 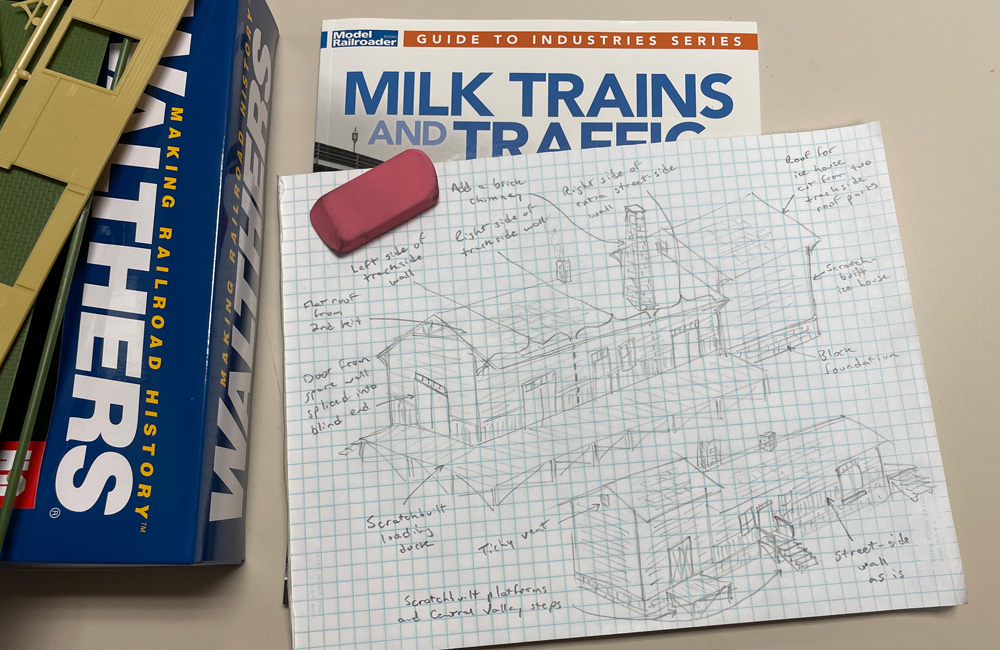 When I’m planning a structure kitbash, I often start with a sketch. Scribbling down rough ideas, erasing what doesn’t work, and replacing them with things that help me visualize my plan and avoid false starts. With this technique I can figure out what parts I need and more clearly imagine what the structure will look like when finished.

As you can see from my drawing above, the sketch doesn’t have to be neat, detailed, or even dimensionally accurate. The idea is to figure out what I can do with the parts I have, what other parts I might need, and whether the finished result will look interesting and realistic.

I do this kind of sketch most often when I’m scratchbuilding. My model railroad is a rural short line set in the 1900s, and my architectural aesthetic was strongly influenced by George Sellios’ HO scale Franklin & South Manchester. I often design buildings with wood siding, varied roof lines, lots of bump-outs and annexes, and details like loading docks, external staircases, and dormer windows.

In the case of the Depot Dash Kitbash, though, I found I was going to have to eliminate some architectural details to meet my goal. The choice of kit for our starting point – Walthers Cornerstone HO scale Union Pacific-Style Depot (no. 933-4057) – was set by the rules of the challenge, and if I was going to make it look like an industry, I would have to remove some of the things that make it look like a depot. In particular, the operator’s bay in the middle of the track side of the building would have to go.

A second depot kit would provide the parts I would need. The depot roof comes with one flat side and one side with a notch for the gable over the operator’s bay. Having an extra flat roof from the second kit made that part easy. To eliminate the bump-out bay, though, I would need to splice a piece of wall in its place. The kit comes with one blind end wall that I could use if I wanted a blank wall there, but I wanted another loading door at the far end of the wall. I would take that door from one end of the street-side wall of the second kit and move the personnel door and window from the end of the track-side wall to the middle. The street side of the industry could use that wall of the kit as is.

I already had an idea to make my kitbashed depot into a creamery. In the era I model, small creameries dotted the countryside, since they had to be close enough to the farms for the milk to get to them as quickly as possible. Jeff Wilson’s book Milk Trains and Traffic offers great information on what these trackside industries looked like and how they operated. A U.S. Department of Agriculture sample floor plan for a typical small creamery was particularly illuminating. Between the receiving room, washroom, and shipping room, there would be plenty of use for all the loading doors two depot kits would provide.

That gave me a plan for the basic structure. To mark it visually as a realistic creamery, though, it needed two more things. First, a creamery needs a boiler, both for pasteurizing the milk prior to bottling and for cleaning and sterilizing milk cans and bottles. A substantial square brick smokestack is in order. I figure I could salvage one from an old structure or scratchbuild one from brick-patterned styrene.

Milk also has to be kept cold. In my era, that would be done with an icehouse. I’ll scratchbuild one from Evergreen styrene novelty siding (no. 4062) to match the horizontal siding on the depot (sans wainscoting). The spacing of the Evergreen siding won’t exactly match that of the depot, but I’ll roof it with the flat section of the two gabled track-side roof pieces to make it look more like an intentional part of the whole, rather than a later addition. I’ll also add a loading door and gable vents from Tichy Train Group or Grandt Line/San Juan Details.

To receive milk cans from milk trains, the creamery would need a loading dock, which means elevating the doors to car deck height. I sketched in the dock and a stone or block foundation under the depot and icehouse. I extended the dock around one end of the building for delivery wagons picking up bottled milk. Central Valley Model Works stairs from my parts stash and a couple more scratchbuilt platforms would finish the structure.

This won’t be that complicated of a kitbash, but I still think doing a sketch like this beforehand is a valuable exercise. Since I’m a cut-first, measure-later kind of builder, putting my ideas on paper keeps me from wasting parts and effort. It helps me compile a list of components I’m going to need. And it inspires creativity. Break out your pencil and sketch pad and see what ideas you come up with.

2 thoughts on “Sketching with Steve: Planning a structure kitbash”